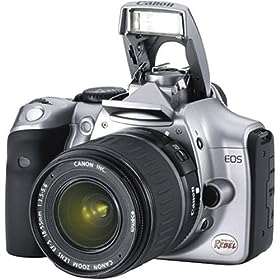 The Canon EOS Digital Rebel (also known as the 300D) is a 6.3-megapixel entry-level digital SLR camera, initially announced on August 20, 2003 at a price point of $899 without lens, $999 with the “kit” lens. It uses Compact Flash storage. The Digital Rebel polycarbonate bodies were originally available in silver color only, whereas the Japanese version was also available in black. Later, black versions of the Digital Rebel were also released in the US and Europe.

The Digital Rebel is often regarded as the little brother of the Canon EOS 10D, which features virtually the same CMOS image sensor and image processing chip. Interestingly, the two cameras also seem to share much of the same in-camera firmware which was demonstrated by hacking back some of the features the Digital Rebel missed compared to the 10D.

The Digital Rebel was the first camera to use the Canon EF-S lens mount. Along with the Digital Rebel, the EF-S 18-55/3.5-5.6 was introduced as the kit lens, available in a USM version in Japan or as a non-USM version elsewhere.

The Digital Rebel’s autofocus system is excellent, especially when using Canon USM lenses with the ultrasonic focusing motors. We were quite impressed with the new EF-S lens even though it is a relatively inexpensive optic.

You won’t find better photo quality in a $900 camera than on the Digital Rebel. It captures incredible amounts of detail — down to blades of grass and individual leaves on a tree. Images are smooth, with nonexistent noise. Color and exposure were both accurate, and purple fringing was kept to a minimum, at least on the lenses I used.

The EOS 10D was an immensely popular camera, capitalizing on the EOS name with an excellent feature set and sterling performance. The EOS 300D seeks to surpass its predecessor’s popularity, offering very similar functionality at a much lower price point.

The Digital Rebel offers buyers an entrance into the world of digital SLR photography for slightly more than the cost of a high-end point-and-shoot camera. Hard-core hobbyists may find the EOS-10D‘s higher shooting speed, heftier feel, and advanced controls more to their liking. But the Digital Rebel’s excellent image quality, light weight, and budget price tag are appealing, and we expect that dealers will have a hard time keeping Digital Rebels in stock this holiday season.

The Canon Digital Rebel is an excellent camera at a remarkably low price given the cost of other Digital SLRs. No doubt prices will drop further and cameras will improve over the next few years, but right now the Digital Rebel sets a price/performance standard that’s hard to beat. It’s clearly better and more versatile than similarly priced non SLR digicams in the same price range, though it may be slightly larger and you do have to buy lenses for it.

First off, consider going to your local camera store (and I don’t necessarily mean Wolf Camera at the mall). By going to your local camera store, you’re supporting your community and you just might build a lasting relationship with people you can rely on when you need some help or answers. If you’re buying online, I recommend sticking with Amazon, B&H Photo or Adorama. Due to the fact that the Canon Digital Rebel is no longer in production, it may tough to find one, especially at places like B&H and Adorama. These three vendors are reliable, trustworthy and generally have the best (legitimate) prices. Additionally, purchasing your camera through these links helps support this site.