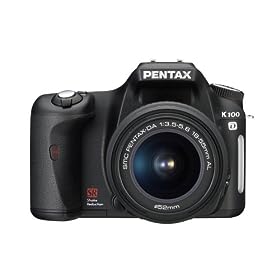 The Pentax K100D Super is an incremental upgrade from the K100D. The upgrades include a dust reduction system, SDHC card compatibility and full compatibility with SDM lenses. It still features the same 2.5? LCD, an 11 point AF system with 9 cross-type sensors, ISO 200-3200 and 16-segment multi-pattern metering found on the K100D.  The in-body Shake Reduction (.pdf fact sheet) means that you get image stabilization with every K-Mount lens out there.

Having the arrogance to call your camera ‘Super’ places it justifiably in the firing line for a critical kicking. But having used the camera for more than six weeks, that thought has never entered my head until now. That’s because the Pentax K100D Super ticks very nearly all of the boxes for those wanting an easy to use DSLR that delivers images you’ll want to keep straight out of the camera; and with the minimum of user input and effort to boot. That said, there is enough room to grow built in for those of us who do want to do more than simply point and shoot, and first time DSLR users will have fun experimenting.

The K100D Super has a better build quality than either the Canon or Nikon entry-level efforts. However, Nikon has progressed the D40 to the D40x and Canon has upgraded the 350D to the 400D, increasing resolutions along the way. This leaves the K100D Super lagging rather far behind at just 6Mp. The question has to be asked, is this enough for what you plan to do with it.

In tests using our DxO Analyzer 2.0 software, the Pentax Shake Reduction system produced an advantage of up to 2 stops, with the shakiest shooters gaining the most advantage. A good result, to be sure, but we have found that quite a few stabilized lenses can beat that.

While the K100D Super’s 6-megapixel resolution lags behind that of some entry-level models by competing manufacturers, the addition of Shake Reduction (SR) and Dust Removal to a set of mature and useful camera features makes for an attractive consumer dSLR. With the street price hovering around $599 (US) with a 18-55mm zoom lens, the K100D Super is a great value.

Since my day-to-day cameras are a Pentax K10D and Pentax *ist DL, I was curious how the K100D Super would compare. I expected the camera to perform better than the *ist DL but fall short of the K10D. What I discovered was that the K100D Super is much more like its big brother the K10D than I expected. In short, this is one amazing little camera.

First off, consider going to your local camera store (and I don’t necessarily mean Wolf Camera at the mall). By going to your local camera store, you’re supporting your community and you just might build a lasting relationship with people you can rely on when you need some help or answers. If you’re buying online, I recommend sticking with Amazon, B&H Photo or Adorama. These three vendors are reliable, trustworthy and generally have the best (legitimate) prices. Additionally, purchasing your camera through these links helps support this site.
[tags]pentax, k100d, super, review, dslr, digital camera[/tags]