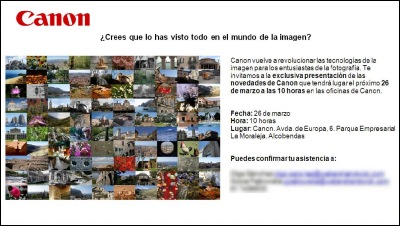 As with the rumors surrounding the Nikon D400, the Canon 500D (or whatever it will be called) is rumored to be announced on March 25.  The buzz has been building for several weeks now of a 15MP, video-equipped entry-level DSLR from Canon.

The above image is a press invite from Canon Europe that several media outlets have been receiving recently.  The date of the press event is March 26.

The new Canon Rebel-series camera is rumored to feature a 15MP CMOS sensor, capture HD video and recent rumors suggest the inclusion of a jog wheel on the back in similar fashion to the Canon 50D and its predecessors.