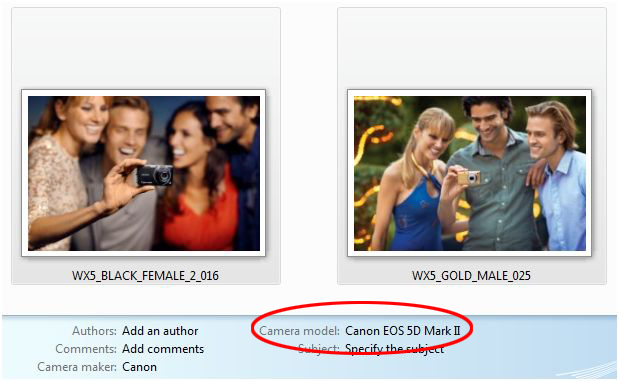 Canon must really feel flattered with all the press that other camera manufacturers are providing.  Just last week, Panasonic released a behind-the-scenes video (subsequently taken down) that revealed its new Panasonic G2 commercial was shot with the 5D Mark II, although it appeared to be captured with the Panasonic G2 at first blush.

And, while Sony hasn’t gone to the amount of effort that Panasonic did to showcase Canon’s full frame camera, the EXIF data embedded in the promo shots for Sony’s new Cyber-shot cameras (WX5, TX9, T99) reveal that many were shot with the 5D Mark II (see top screen capture).

Is this a big deal? Probably not.

Is it a little embarrassing for Sony? Yeah.

Is there a lesson to learn here? I think so.

Sony has been pushing pro photographers to take the company seriously.  At PMA 2010, Sony was the only camera manufacturer that put a pro photographer on stage to give free seminars on the show floor throughout the week.  Canon usually is the big dog at PMA with great lectures from the company’s Explorers of Light, but Canon was absent from PMA 2010 and it looked like Sony was really stepping up its game.

If Sony really believes in the company’s evangelists who shoot with an A900 and Sony/Zeiss lenses in their everyday professional endeavors, why not seek out these photographers for its promo shots and ad campaigns?

What’s more, this isn’t the first time Sony has used a Canon shooter for its campaigns.  Just prior to the release of the A900, Sony shot a killer campaign in Miami, called Foam City.  The still shooter on set there used a the original 5D, a Canon 1-series and Canon glass (see above and below).

Of course, the use of a Canon DSLR on a Sony campaign prior to the release of the A900 can be somewhat understood.  However, I suspect that there were pre-production A900 models floating around at the time, which would have been capable of capturing the very well-lit scenes in Miami.  For that matter, I think the A700 would have sufficed in those conditions.

While this may be rather humorous to many of us, and hopefully a bit embarrassing to Sony, I think there is still a bigger message to take away from the recent slip-ups from both Panasonic and Sony.

And that message rests in camera manufacturers’ marketing…

If you want consumers (both amateur and professional) to put their trust in your products and lay down hard-earned money for those products, perhaps you should first consider using your own products on your own marketing.  Seek out those professionals that trust in you and your products already, and hire them to be your marketing vision on the surface . . . as well as beneath the surface.

If manufacturers want to have marketing campaigns “go viral” in today’s media, you need to start the infection from within.  Otherwise, it will go viral, but it may not be the kind of virus that you are looking for – you may just end up endorsing a competitor’s product.