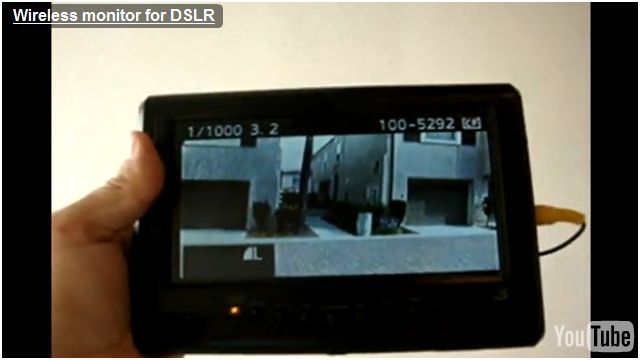 Want an affordable way to catch the live view or video feed from your DSLR’s LCD display?  Does $200 sound about right?

The above video is a demonstration by photographer Robert Benson, who hacked together a wireless transmitter and receiver for real time video feed from your DSLR. Such pro-level devices can run in the neighborhood of $4k or so.

“The device, consisting of a transmitter, receiver, color 7? monitor and additional components, takes the feed that normally appears on the back of your DSLR, and feeds it wirelessly to one or more monitors, which can be used by the art director on a shoot, assistants, or anyone else who wants to see what the photographer is seeing. Sends video or still photos without delay. Don’t have to bump heads anymore trying to show others an image on the small display on back of camera.”

Benson gives a full rundown of how this kit works over on his blog.  And, if you like it, he’ll assemble a kit for you and ship it out for $196.