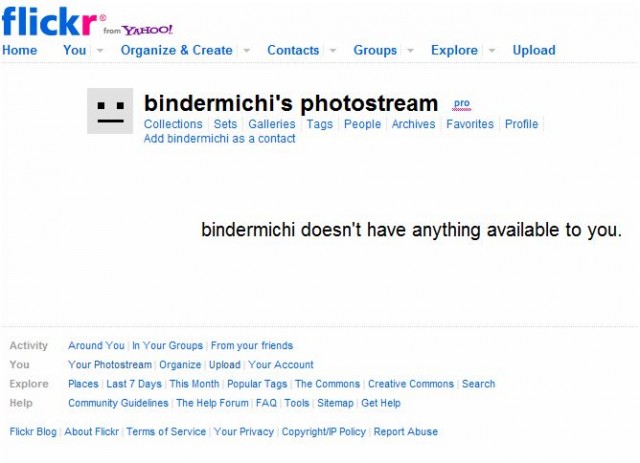 That “shoot first, ask questions later” corporate attitude appears to have caught up with the photo sharing service today in a very bad way.  According to Mirco Wilhelm (aka Flickr Pro user bindermichi), a Flickr staff member accidentally deleted his account when Wilhelm reported abuse by another Flickr member.

Unfortunately, I have mixed up the accounts and accidentally deleted yours. I am terribly sorry for this grave error and hope that this mistake can be reconciled. Here is what I can do from here:

Please let me know if there’s anything else I can do.

Again, I am deeply sorry for this mistake.

The “history” in Wilhelm’s account that “Flickr staff” references was 5 years of work and amounted to nearly 4,000 photos.  Wilhelm gave a glimpse of the effect this will have on his attempts to rebuild the account himself:

So how can this really compensate losing close to 4000 “linked” pictures from my web albums? I have to recreate most of these links manually, which will take weeks, if not months of my free time! Not to mention, external websites that had linked these images (including some official Yahoo! and Flickr blogs).

This latest example of what many consider indifference to their paying members has led to an outcry from Flickr users around the Net.

For what it’s worth, Flickr staff member, Zach Sheppard, says that Flickr is working on a possible undo feature.

You can follow the developments of the story at the links below:

Thomas Hawk (where I first read about it)