At the low end, Apple put Intel Core i5 processors in the 13″ models – and kept the bottom model at the $1199 price point.  However, the 15″ model is where it really starts to get serious – with Core i7 quad core processors and dedicated graphics cards.

Apple went with AMD graphics cards in these new machines. The base 15-incher gets a 256MB video card in its standard configuration, while the top 15″ model and 17″ model get a 1GB AMD Radeon HD 6750M video card.

Apple claims that these improvements lead to at least a 2x speed improvement over last year’s MacBook Pros, which I thought were pretty darn fast to begin with.  Still yet, the boost in processor and video card speed may not be the hottest part about these new laptops.

Thunderbolt is causing quite a bit of a rumble.  Intel’s codenamed “Light Peak” project, which has long-been rumored to be a part of this year’s Macs, has found a place among Firewire and USB ports on these new MacBook Pros.  And, if Apple and Intel have their way, Thunderbolt will become the defacto I/O interface for all devices (and it may be for all the better).

I was an early adopter to USB 3.0 – and I’ve been loving the speed at which I can edit photos and HD video from an external hard drive.  However, Thunderbolt aspires to be so much more than just another port. 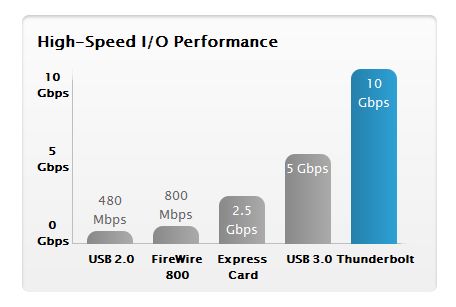 Thunderbolt offers 10Gbps up and down stream over two channels.  While it’s still wicked-fast for my purposes, USB 3.0 only offers half the data throughput of Thunderbolt.

Additionally, Thunderbolt ports double as a DisplayPort and can support up to two displays in a chain of other Thunderbolt devices.  It appears that the 13″ model can only support one DisplayPort monitor, while the 15″ and 17″ MacBook Pros can handle two monitors in the chain.  This is probably a result of the dedicated video cards in the higher-end models.

Speaking of the chain, Thunderbolt I/O supports daisy chaining up to six total peripherals from the one port.  It also sends power downstream, so you can connect an external Thunderbolt SSD without the need to be plugged in via AC power.

Here’s a demonstration from Intel on how the Thunderbolt port works:

In addition the to dedicated Thunderbolt plug, expect to see lots of adapters that will work seamlessly with the Thunderbolt ports because the technology is based on PCIexpress protocols. This means that a Firewire or eSATA adapter attached in the Thunderbolt chain will shake hands with the computer just like it is plugged in directly through a PCIe interface (e.g., an ExpressCard interface).

One downer for Premiere Pro users is that the new AMD graphics cards don’t support CUDA GPU acceleration – that’s an NVIDIA-only thing.  One has to wonder whether the decision to go for AMD video cards has something to do with possible hardware acceleration in the upcoming revision of Final Cut Pro.

I really don’t see much that turns me off with these new models.  Personally, I’m eyeing the 15″ model pretty hard.  An update to Final Cut Pro may very well push me over the edge.  We’ll see if Apple has anything to say about that at NAB…

In the mean time, what do you think about the new MacBook Pro models?  I’m also interested in any specific thoughts you have about Thunderbolt and how it fits in as a piece to the overall puzzle for media professionals’ workflow.