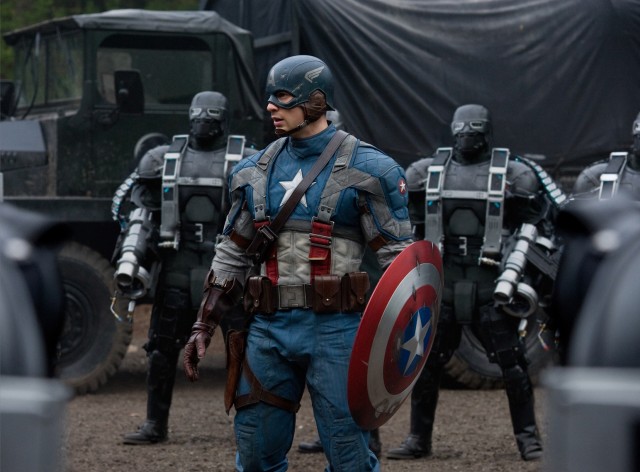 I went to see the new Captain America movie on Sunday.  As I sat at the end of the film reading the credits (I find them fascinating.  Does anyone else read the credits at the end of films?), I noticed a credit for Canon providing equipment to use.

This made me wonder about what kind of gear Canon was providing and I began speculating to myself about whether Canon HDSLRs could have been used in the film – since I had just watched a Red Tails teaser earlier that day and learned that Philip Bloom had been shooting Canon HDSLRs as second unit DP.  At the end of the credits, I was distracted by The Avengers teaser (which didn’t look so great at this point) and forgot all about the credit for Canon.

As it turns out, there were several scenes in Captain America that were captured with the 5D Mark II, according to a press release from Canon yesterday.  The 5D Mark II was apparently used for several POV action shots, including a car chase and motorcycle chase scene.

The big advantage of the 5D Mark II was the ability to place it in tight quarters inside a vehicle as a B-camera and still be able to capture footage with the A-camera.  Even though the 5D Mark II was technically in the shot, it was small enough and easily concealable to allow simultaneous coverage from both cameras.

It’s a testament to the power of this camera that they were able to seamlessly mix the footage with film coverage of the same scenes, and then have the footage hold up on the big screen.  Just another notch in the Canon 5D Mark II’s belt.

As for the movie itself, I thought it was the best Marvel movie yet.  Just good, fun storytelling with a character who you can’t help but cheer on.

“The challenge with a lot of action photography is getting the camera in the right position,” Taylor noted. “I’m always looking to get the camera into impossible to reach places because those kinds of shots make action sequences much more exciting. Most 35mm motion-picture cameras and even the leading digital cinematography cameras are just too big to get into interesting positions.”

Action scenes in “Captain America: The First Avenger” in which Taylor used 5D Mark II cameras for POV shots include a car chase and crash, and a high-speed motorcycle pursuit. The small size of the camera enabled Taylor to mount it on the interiors and exteriors of moving vehicles to capture dramatic action shots. The camera’s size also ensured that it was “invisible” to the film cameras shooting the same scene from a distance.

“The thing with action is that the more angles you can shoot, the faster the cuts you can use, and the more energy you get into a sequence,” Taylor added.