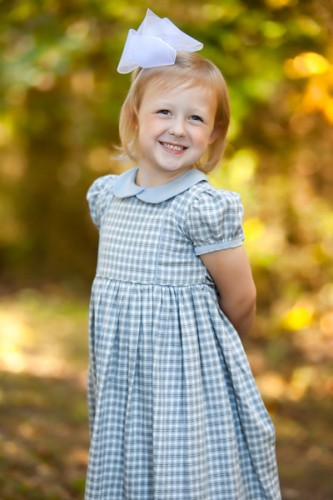 One of the goals of my wife is to have great portraits of each of our children at age 3.  We’ve been pushing our luck with our current 3-year-old, who turns 4 in a couple months.  While we’ve shot tons of images of her this year; however, we’ve not taken that right shot with just the right dress, bow and smile . . . until last weekend.

It was a simple shoot at my parents’ house that took us about 5 minutes to get the above shot (we kept shooting for about 10 more minutes, but settled on one of the first few shots that we captured).  Even though it was midday, we found a tree canopy in the front yard with some speckling of light coming through the trees.

I used my Canon 5D Mark II and Sigma 70-200mm lens in aperture-priority at f/2.8 and ISO 400, which gave me 1/125s at 125mm.  The only light modifier was the silver side of a 32″ 5-in-1 reflector that my wife held just out of the left side of the frame.  Even though it wass in the shade, the reflector still gave just enough fill to brighten up the left side of her face and provide a little catch light in her eyes.  See the diagram below. 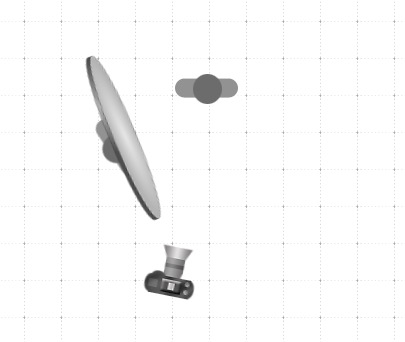 After choosing the frame that we both liked, I opened it in Photoshop CS5, used the soft portrait preset in Topaz Adjust (with a bit of a bump up on the detail slider), then brightened eyes and teeth using layer masks. We’ll be printing a 16×20 on a watercolor paper to match our son’s portrait from 6 years ago.

I don’t do a lot of these types of posts; however, if it’s something you’d like to see more of, let me know and I’ll consider adding more of this kind of content in the future.