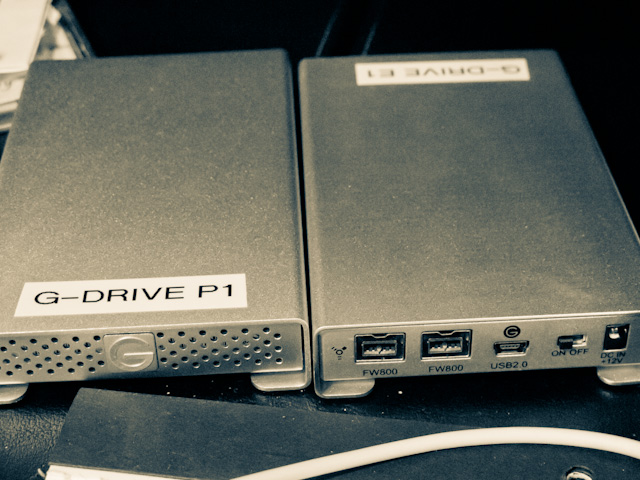 For the past six months or so, I’ve been using G-Tech’s portable G-Drive Minis for all of my on-the-go storage needs.  Based on the price and performance, I can’t recommend these things enough.

They contain fast 7200RPM 2.5″ drives, connect via FW800 and are bus-powered with the ability to daisy chain multiple drives (thanks to dual FW800 ports) while maintaining bus-power only.  The housing is robust and, I must say, pretty too.

I’ve been using a 500GB G-Drive Mini the longest; however, I recently added a 750GB G-Drive Mini to the mix as well.  Again, I have nothing but good things to say about these drives and I’ll likely add a third to mix soon.  I daisy chain these two everyday, and I’ve added a Ki Pro drive as a third link to the chain when importing footage to one of the G-Drives.  They have never missed a beat.

I use these drives in conjunction with a 15″ MacBook Pro Core i7 and a 8-Core Mac Pro – mostly the MacBook though.  I keep my photos that I edit in Lightroom or Photoshop on these drives.  All raw video footage is stored on these drives, from which I have edited with Premiere Pro CS5.5, Final Cut Pro X and After Effects.  Additionally, I’ve edited audio files from these drives with Adobe Audition.

In all cases, these drives have met my needs. Sure, there are times when an SSD drive, RAID 0, or faster interface would be advantageous. In terms of price vs. performance though, these G-Drive Minis are tough to beat.

G-Tech puts everything in the box that you need to get up and running instantly.  Even if you have an older FW400 interface, G-Tech gives you a FW800-to-FW400 conversion cable.  Each drive also includes a USB 2.0 and a FW800 cable.

As I write this, the 500GB Mini runs about $160 and the 750GB Mini runs about $190.  Given that there are few choices for 7200RPM drives in the bus-powered 2.5″ form-factor, I think these are pretty solid deals. Expect prices to come back down as the supply from Thailand’s hard drive production picks back up.  I bought the 500GB model for around $135 before the supply shortage hit last year.

Until the SSD drives come way down in price (the G-Drive Mini 256GB SSD is still over $1000), I’m going to stick with the spinning hard drives.  Although, I might be willing to spring for a Thunderbolt RAID for a desktop solution if those ever hit retailer shelves.

Speaking with Western Digital reps at CES 2012, I was told that the G-Tech brand would survive WD’s (then-pending) acquisition of Hitachi Global Storage Technologies (the makers of the G-Tech devices).  Western Digital’s purchase of Hitachi has closed and it is confirmed that WD will continue to operate the entire Hitachi GST company as a separate subsidiary.

I’m a big fan of WD drives and tech (I love the My Book Live, USB 3.0 drives, WD2go Apps, Live Hub, etc.); however, G-Tech has a power-user reputation that it delivers on.  Photographers and video editors have come to rely on G-Tech drives for their speed and reliability.  So, kudos to WD for not messing with a good thing.

Now, when are we going to get those G-RAID Thunderbolt drives?