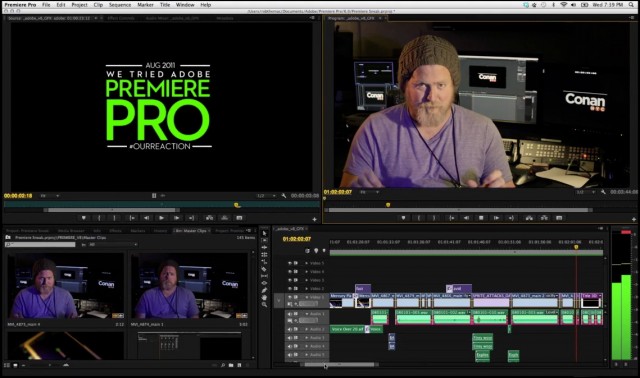 Conan O’Brien’s editing staff put together a fun little video (seen below) that talks about Adobe’s upcoming Premiere Pro CS6.  In it, they take some jabs at both Apple’s Final Cut Pro X, as well as a couple of digs at AVID.  Additionally, we get a little bit of a look at the new CS6 interface.

I didn’t really catch any groundbreaking new features from the above video.  What was new in there seems to be just skin deep.  That said, the fact that this teaser is out there now confirms that we’ll be getting to know more about the new Creative Suite (along with the Creative Cloud options) very soon.

On my wish list is more flexibility for dealing with nested sequence OMF exports, auto-syncing clips based on audio waveforms, better audio mixing tools that include more plug-ins and effects (what they showed in the above clip didn’t really reach the expanse of what I’m hoping for), and some simpler things like alt-drag for copying and more options in the title tool (full justified text, please?).  I’d also like the ability to open bins from other projects (like in AVID) without having to open a sequence via Dynamic Link (probably not going to happen, but a guy can dream, eh?).

If you don’t recall the last time Team Coco did a promo video, here’s the FCP X video for your enjoyment.