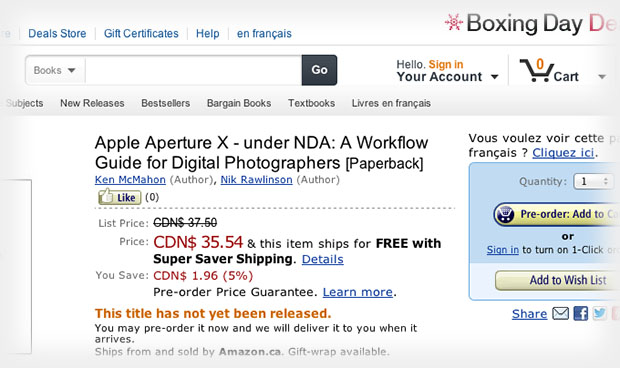 About the only comment I hear lately concerning Apple’s Aperture 3 is the lack of any meaningful update in recent memory. However, recent book listing on Amazon Canada may give a spark of hope to Aperture users dying for an update though.

The “Aperture X” name meshes with Apple’s naming scheme for its latest pro video editing software – Final Cut Pro X – which skipped versions 8 and 9 and jumped right to 10 (or, X).

Aperture 3 launched on February 9, 2010, which puts us very close to the 3-year anniversary of the pro-level image editing software – an eternity for software updates these days.

Any Aperture 3 users out there holding out for the next iteration? What features are must haves and what’s on your wish list?