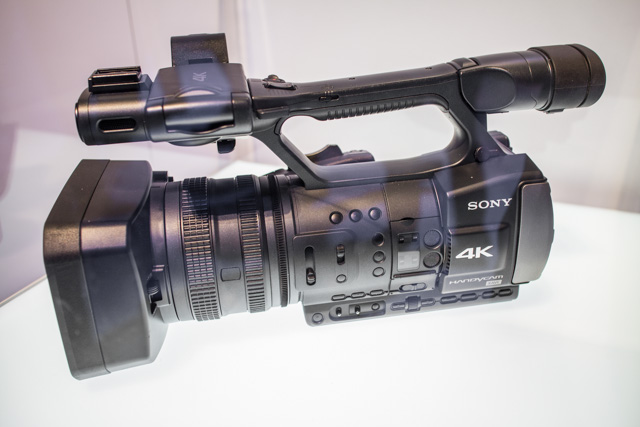 At it’s CES 2013 press conference on Monday, Sony unveiled a concept model of an upcoming 4K consumer camcorder. Sony had a mock-up of this 4K camcorder under glass in their booth at CES.

While Sony referred to this camera as a consumer model, it is clear from looking at it that the camera is at least a prosumer model in terms of available features – if not a low-end pro model. 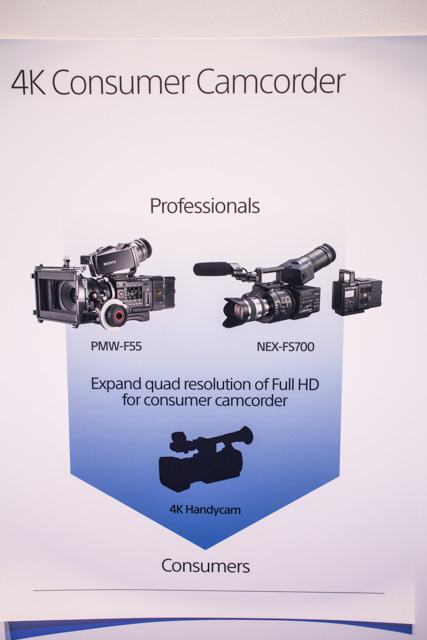 Sony gave us nothing about the final feature set of what you’ll find inside this camera other than a 4K sensor; however, there are plenty of features that you can assume based on the form factor and external controls of the mockup. 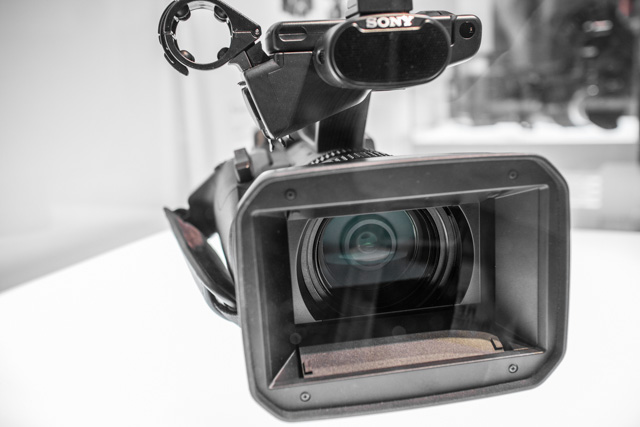 The 4K concept camera features an XAVC badge, which is Sony’s new codec introduced last year. As Sony puts it, “the primary objective in adopting the XAVC format is to develop a family of professional production tools that can economically handle High-Frame-Rate (HFR) HD and 4K imaging formats.” The maximum capability of the XAVC codec allows for 4K video at 60p and 4:4:4 12-bit at 960Mbps bit rate. Of course, it’s likely a consumer-grade 4K camera would be substantially lower than the max that XAVC can deliver. 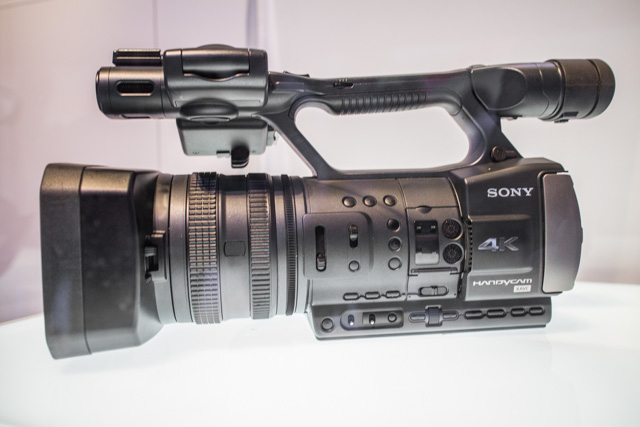 Your typical ND filter switch, dual XLR inputs and manual camcorder controls are all featured on this 4K mockup camera; however, the one thing I couldn’t get an answer on, nor could I figure out from looking at the camera, was the type recording media. There is no clear indication of where the removable media goes on this camera and Sony personnel on hand had no info on it either. 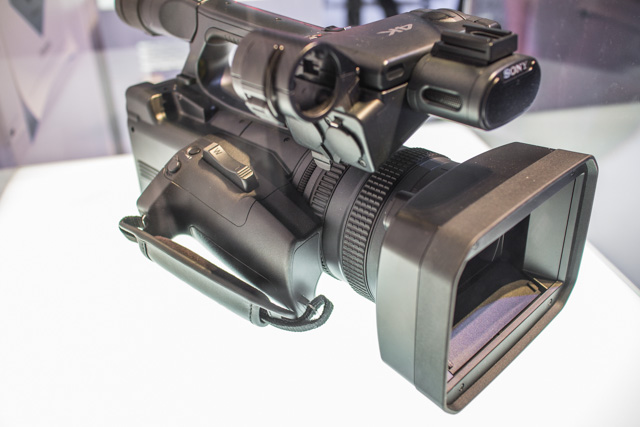 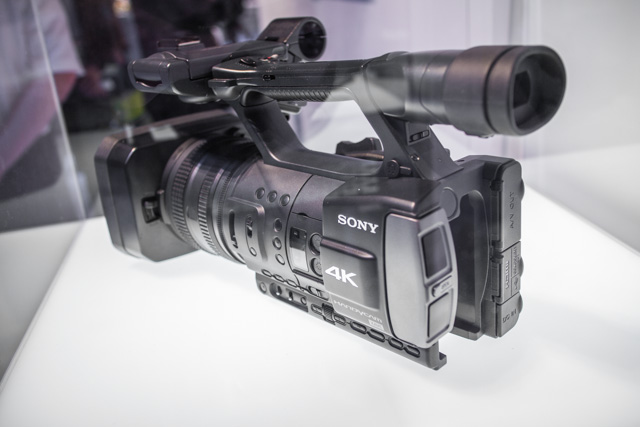 There were two bays on the rear of the camera that had to be the place where removable media is inserted; however, the bays were covered by doors. Looking along the side of the body, these bays were not big enough for SxS media, which was confirmed by a Sony rep who has seen what’s under the doors and told me that they don’t look like SxS slots. My best guess is that these are dual XQD card slots based on the size and speed requirements of XAVC 4K video capture. 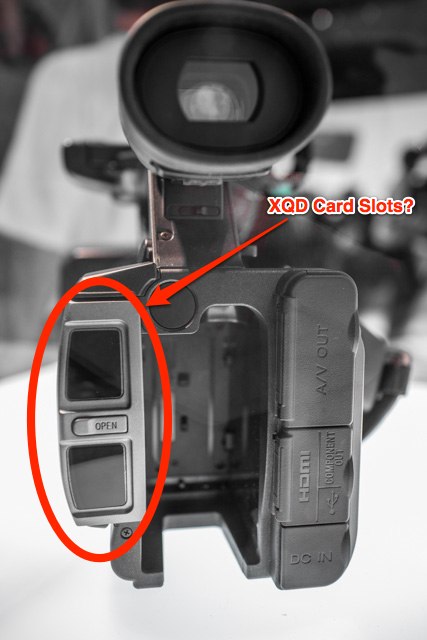 Currently, S-Series XQD cards from Sony offer up to 168MB/s read/write speeds, which are as fast or faster than most of the SxS cards from Sony. These XQD cards can easily handle the on-board XAVC 4K capture from the new Sony F55 – although Sony uses SxS slots on it. Again, this isn’t official from Sony, so take it with a grain of salt until we learn more about the camera. 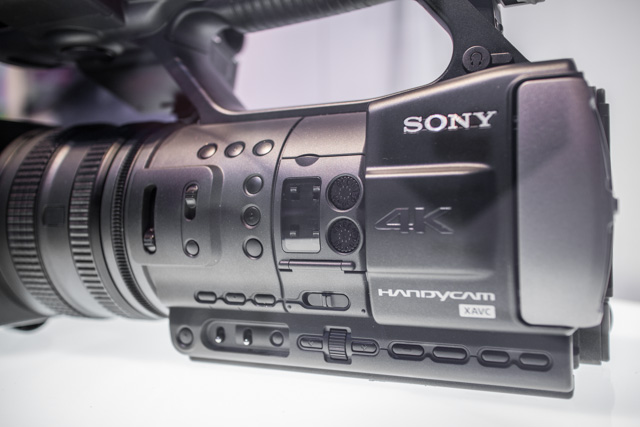 There’s really nothing left to say about the 4K consumer model. If something in the images jumps out at you, please drop a line in the comments below. 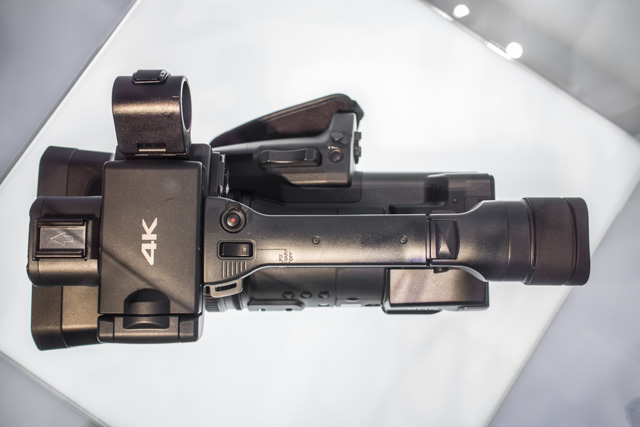 Hopefully, we’ll have more for you on Sony’s 4K offerings from NAB 2013 in April.