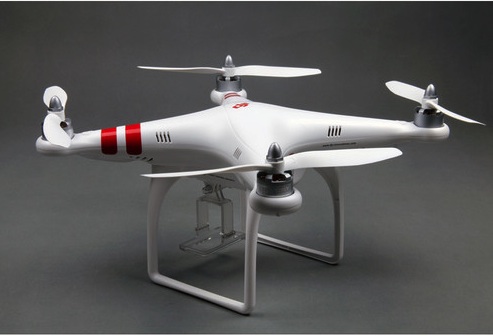 The DJI Phantom is a very cool device. It’s a quadcopter that can carry small GoPro cameras, which can result in some awesome shots. However, it’s not a great experience for all users.

The Phantom ships as a ready-to-fly kit that includes the quadcopter, remote control, battery and charger. It offers 10-15 minutes of flight time out of the box, and offers up to 300 meters of effective control distance.

We’ve also seen what the DJI Phantom can do in recent coverage of protest in Egypt, in which one was shot down by police.

The DJI Phantom is capable of delivering some stunning footage of locations that just can’t be reached by any other sub-$1000 device, like the below video from YouTube user questpact captured at Niagara Falls.

By most accounts, the DJI Phantom is incredibly easy to operate – even for novice users. The Phantom has several advanced features that act as safeguards to prevent users from “losing” their unit. For instance, “when the communication between the Main Controller and the transmitter is disconnected, the outputs of all command sticks from controller will go to the center position. If the GPS signal is good enough, the system will automatically trigger Return To Home and will land safely.”

When you enable the “Go Home” function on the remote, the Phantom is supposed to return home automatically without further control input. A proper “Go Home” operation can be seen in the below video.

Even with all of these safeguards, several experienced users have found out that the DJI Phantom can still flyaway on its own and completely fail to respond to control inputs. Photography Bay reader Darren Kelly recently sent me the below video describing the flyaway problem that resulted in the loss of one DJI Phantom and GoPro into a lake. He purchased a second DJI Phantom to replace the one he lost and experienced the same flyaway issue, although this time he steered clear of bodies of water during his trial run with the new unit.

I reached out to DJI regarding this issue and received the following troubleshooting response, which suggests that DJI believes there is no “flyaway problem.”

In Phantom loss control from the transmitter, you can close and reopen the transmitter, put A,E,R sticks at center and T at the lowest level, then switch into Atti. Mode to reconnect to the Phantom. If reconnect cannot succeed, the Phantom will return to the home position if no obstacles on its way back.

Clearly, this is not what Darren experienced in either of his two flyaway incidents. Several others have had similar experiences to Darren. A couple of enthusiast forum threads at PhantomPilots.com and RCGroups.com continue to document the issue and question the cause of these flyaways. Additionally, an attorney has posted an open letter concerning the flyaway problems. A search on Google for “DJI Phantom flyaways” reveals numerous other accounts of users with similar complaints.

Several users believe the problems are associated with the 2.4GHz frequency (the same as most WiFi routers), and that moving to a 5.8GHz frequency would be a safer bet due to the fewer number of devices operating at 5.8GHz.

Darren said he sent a plea to DJI for assistance on this problem; however, he has yet to hear a response. Speaking with a DJI dealer, however, he was told that their belief was the problem lies with the cheap transmitter and receiver units that fail to cancel out interference that can be anything from someone’s wireless router, to a microwave oven with a faulty door.

While the vast majority of users experience no issues with the DJI Phantoms, there does seem to be a trend among some users who experience flyaways that are not attributable to user error.

Have you experienced a flyaway with your Phantom or other quadcopter? Feel free to describe your experience below and if you have any thoughts on what the cause of the flyaway was.

[UPDATE 1/14/14: When asked about this post and user comments here on Photography Bay, DJI provides a response to flyaway issue. See more here.]