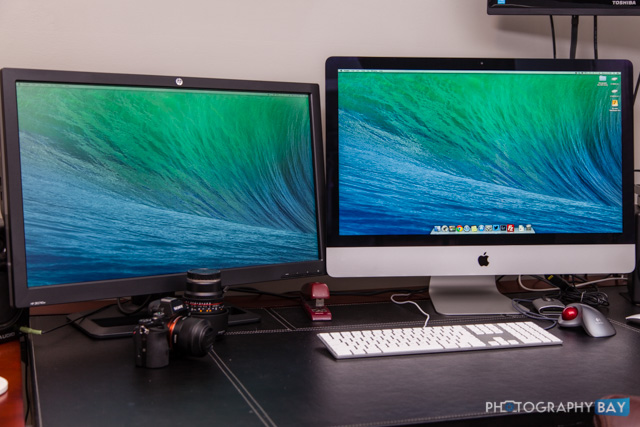 I picked up a new 27″ iMac a couple weeks ago when B&H dropped the price of the previous generation iMac by $300. Specifically, I bought the 3.2GHz Core i5 unit with a nVIDIA GeForce GTX 675MX 1GB GPU. I paired the iMac with a HP ZR2740w 27″ IPS display.

After using it for a couple weeks, I thought I would take a few minutes to share my thoughts on my new setup. I figured this would be an appropriate time since we have an active “Mac or PC” thread going on over on our Facebook page now.

I am generally not an early adopter. In fact, I often purchase a product near the end of its market life cycle (there are exceptions though – e.g., the 5D Mark II). This has worked well for me with Mac desktops and laptops over the years for a couple of reasons.

First, all of the early adopters are often times the equivalent of beta testers when there are bugs that need to be fleshed out. I’ve been there myself a time or two. So, the older I get, the less inclined I am to jump in from the word go.

Second, the price is usually much better when a product like a computer is a few months old. In this case, the iMac I bought was initially launched in November 2012 for $1899.95. I bought it 12 months later for $1599.95. I have found similar bargains with my past couple of MacBooks. Additionally, the updates to the iMac line were not all that huge in September 2013, which is when I started keeping my eyes open for the last-gen iMac deals.

For what I do, the machine I bought is plenty powerful enough to suit my needs. Good or bad, I’ll spend more time writing and communicating on this computer than I will doing heavy photo or video editing. I briefly considered the new Mac Pro; however, the practical side of me reminded me about the above considerations.

I simply don’t need a racehorse of a computer. My money is simply better spent on screen real estate and moderate computing power.

Make no mistake though, this iMac is no slouch. It certainly outshines my 2011 model MacBook Pro, which has been a workhorse for me nearly 3 years now. Additionally, I opted for 16GB of extra RAM ($140 for Crucial RAM vs. $200 to just upgrade to 16GB total if bought direct from Apple in the configurator at time of purchase), which brings the total RAM on my machine up to 24GB.

The choice to go with the HP ZR2740w 27″ monitor was made for similar reasons as the iMac purchase.

First of all, I was definitely going to get a second monitor. I’ve lived with dual monitors for years now – even with my MacBook Pro. It was important to me to match the screen resolution and physical size of the iMac, which was something that frustrated me with the 15″ MacBook and 24″ monitor I had previously used.

Again, I considered something fancy like the Apple Thunderbolt Display; however, there was no way that I was going to shell out $1000 for a monitor. I appreciate the reasons that people do so – and there are certainly some good considerations. The Thunderbolt connectivity with additional ports is a great feature that I do envy a bit, but I just couldn’t justify that decision for me.

I also briefly considered the Monoprice 27″ IPS display, which is said to use the same panel as the Apple Thunderbolt display. After researching it, however, the concerns over quality control led me away.

A little more research led me to the HP ZR2740w 27″ LED-backlit IPS display. It retails for $629; however, B&H had it on sale for $449, which is just $50 more than the Monoprice monitor I had looked at. The HP also comes with a 3-year parts and labor warranty. All the signs lined up for the HP unit, so I picked it to go with my new iMac.

I feel like I now have a pretty good color balance between the iMac and HP monitors. The HP is a little on the no-frills side for calibration, so you’ll need to use the built-in graphics card from the iMac to configure it. Once set though, the monitor matches up quite well with the iMac.

I haven’t done much photo and video editing other than a editing a few hundred images in Lightroom after I imported my catalog from my MacBook Pro. This iMac cruises through Lightroom with no problem, but I’m really looking forward to jumping into Premiere and Final Cut Pro for some video projects soon.

Overall, I couldn’t be much happier with the performance and functionality of this pair – as well as the price that I nabbed both of them at. (At the time of this post, both the iMac and HP monitor are still available at the price I paid.) I certainly have no problem recommending either unit to anyone.