Apple’s upcoming iOS 8 update adds plenty of new features for photographers and opens up doors for other applications to make an even greater impact on photography with an iPhone.

Apple is adding several features to the built-in camera, including a built-in timer with 3 second and 10 second exposure delay options. Additionally, the Camera app gets separate focus and exposure controls, which can be adjusted on screen and toggled via taps. 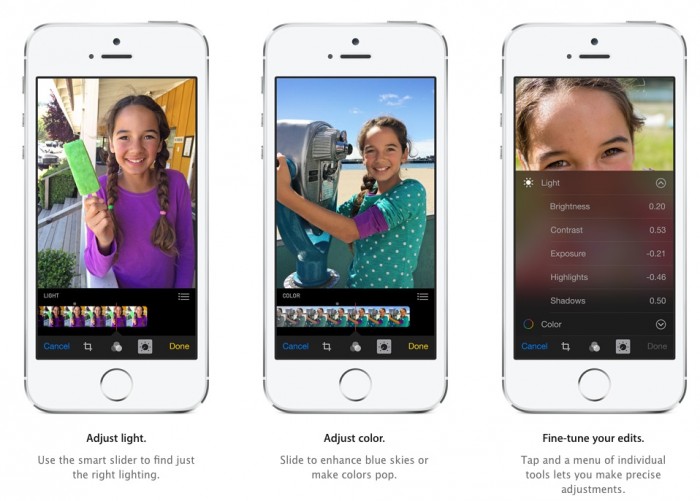 Editing also gets a more robust bump in features with more intuitive and more powerful controls.

iOS 8 also introduces time-lapse recording via the Camera app and will play back the images as an animation after the time-lapse is complete.

Perhaps what is happening on the developer side in iOS 8 will be even more exciting once the unlocked features start trickling out through third-party apps.

The biggest news for iPhone photographers is that Apple has finally unlocked manual exposure in the camera controls for developers. Camera apps, although apparently not the built-in Camera app, will now have the ability to shoot in full manual mode with access to ISO, shutter speed and aperture settings. Of course, developers will need to build this mode into their app . . . and I bet plenty of the popular camera app developers are already hard at working on making this awesome.

Another cool feature in iOS 8 for developers is PhotoKit, which allows developers to access photos directly from the Camera Roll, which means that you’ll no longer have multiple copies of images for processing in various apps.  Additionally, you can use app extensions to make certain processes inside of the standard Photos app without needing to open up a separate app.

Apple is also pushing all photo storage to iCloud and combines a library across all your devices. The first 5GB is free and pricing has dropped on other tiers.

With the full resolution photos stored in iCloud, iOS will optimize photos viewed on your device so you aren’t using up so much storage. (Think like Smart Previews from Lightroom 5.)