We previously heard some solid rumors in late 2013 that Canon was testing a 75MP+ pro-level DSLR. Now, a new round of hype is circulating around the rumor sites over the mention of a “high megapixel” EOS camera in an interview with a couple of Canon executives.

The interview largely covered the new EF-S 10-18mm lens and the EF 16-35mm f/4L IS lenses. The relevant quote being passed around is:

I to higher pixel unnecessarily is the opposite, but there is also a feeling if there is a high-performance lens that matches the number of pixels (pixel pitch), to want to take a look at the descriptive power of the true. By super-wide-angle zoom image quality is good came out to the periphery, and we look forward to the advent of high-resolution model of the EOS.

While I still believe such a camera is coming and has been field tested, the hype appears to be a little off the mark. Reading the rough machine-translated text on the actual site suggests that the comment was actually made by the interviewer as they were discussing the trade-offs in making the highest quality lens versus the cost, weight and size considerations.

Check out the screen grab of the translated interview below. 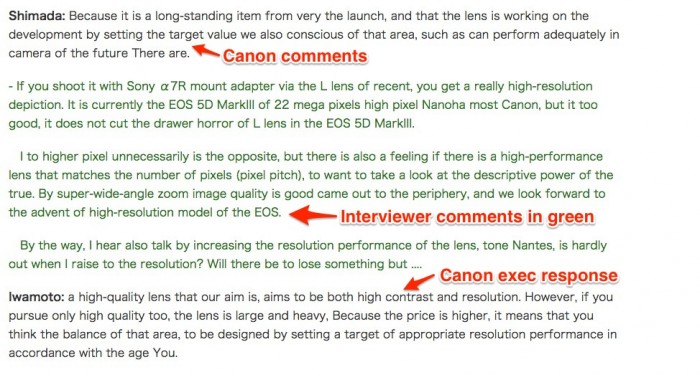 While I’m looking forward to seeing Canon’s next pro-level DSLR, this isn’t quite the smoking gun just yet.