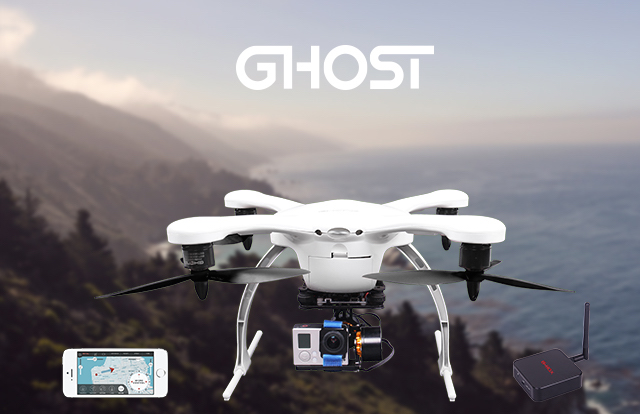 It looks a lot like the DJI Phantom in size, shape and load capacity. Instead of a complicated dual stick controller, however, the Ghost Drone is controlled completely by a smartphone app.

A small G-Box communicates between the smartphone and the drone in order to get past the range limitations of Bluetooth.

You can use the smartphone app to mark waypoints for the Ghost to automatically fly to and from. Or, you can take full control of the Ghost with an on-screen joystick. 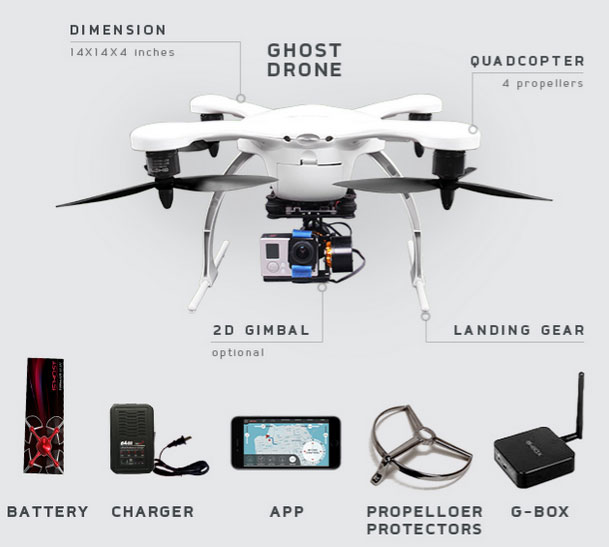 There are some very cool features like auto-follow mode that allows you to program the Ghost Drone to follow the controlling smartphone automatically. You can see a short test clip below.

You can also control the drone by tilting your phone in the direction you want it to go. Check out the demo video below showing off tilt control.

They are even working on a LiDar unit that lets the Ghost Drone see obstructions like trees, buildings and rock walls (remember that DJI F550 that crashed into a rock wall?).

It is available with an integrated gimbal for mounting a GoPro, the angle of which can also be adjusted by vertical and horizontal tilt controls in the app.

Prices for the Ghost Drone start at $375 without the gimbal. It can even be had with a GoPro HERO4 for under $1000. While the campaign is full fund by almost 400% at the time of this post, they are trying to push the pre-orders higher in order to drive manufacturing costs down. Hopefully, that will mean lower retail prices when it hits the market.

In the interest of full disclosure, Ghost is sending me the $375 basic Ghost Drone kit in January so I can test it, which they offered me in their news pitch. I would have written the same post here if they had just asked me to pass the news along, but I’m not going to turn down a free Ghost Drone if they are offering.

I think there are some very cool features in the Ghost Drone that really thinks outside the box and I’m looking forward to getting my hands on it soon. If you want to learn more about it, the IndieGoGo project for the Ghost Drone is only open for a couple more weeks through Dec. 10, 2014.