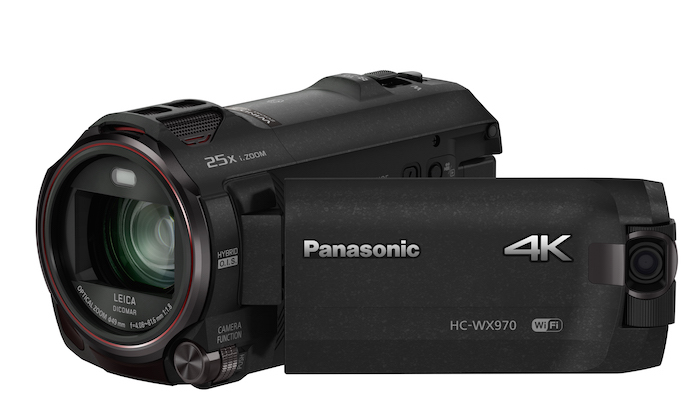 Just down the hall from Canon’s meager new camcorders announced at CES 2015 today, Panasonic revealed a pair of new camcorders, the HC-WX970 and HC-VX870, which capture 4K video for $999 and $899, respectively. 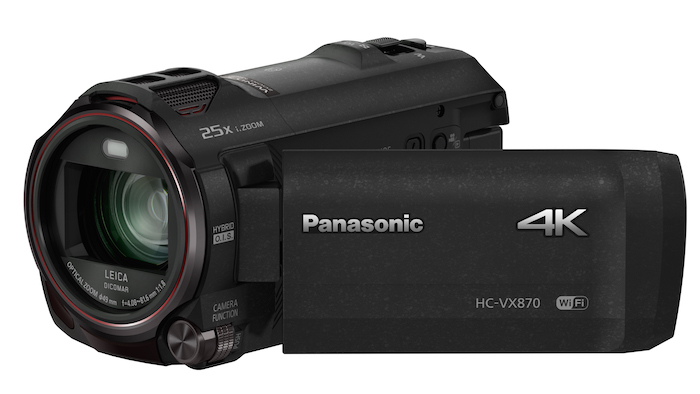 The WX970 model includes a second camera for capturing a second angle for picture-in-picture. A backup function enables the main camera image and the picture-in-picture video to be recorded as separate scenes so that each can be played back on their own as well.

These look like fantastic consumer camcorders and a solid price point to bring 4K to the masses. Next up is to see what Sony does later today in the 4K realm.

In the mean time, check out the full press release from Panasonic below.

Professional results, high-class clarity – wherever you are

The HC-WX970 and HC-VX870 models are both equipped with 4K Video Recording and 4K Photo mode which delivers four times the resolution of Full HD, contained within a beautifully designed and compact body. Combining the premium Leica Dicomar Lens, an 8.29M back-illuminated sensor (BSI), and a Crystal Engine 4K processor, you are now able to capture your world with stunning cinematic image quality.

Panasonic’s HC-WX970, HC-VX870 and HC-V770 models include High Dynamic Range (HDR) Movie functionality which is a world’s first for Full HD consumer camcorders. HDR recording combines the best elements of two images taken with different exposures to create crisper, clearer videos. The result is a reduction in overexposure and underexposure enabling you to record beautiful videos with a more dynamic range of contrast between dark and light areas when played back.

Featuring a 4-Drive Lens System, the HC-WX970 and HC-VX870 models enable 20x optical zoom in 4K resolution; while the models’ high-speed, high precision Auto Focus (AF) technology means you can capture the action perfectly, even when a scene suddenly changes.

With a new Advanced Twin Camera function, the HC-WX970 allows you to shoot in different angles at the same time – meaning you could also film your own reaction to your momentous occasions as you film them. A sub camera placed on the edge of the LCD monitor captures the second feed in a picture-in-picture format, while also featuring ±20° tilt function and a 2x zoom.

To further boost the Advanced Twin Camera functionality, the HC-WX970 includes Narration Mode and a backup function.  The Narration Mode emphasises the camera user’s voice so that a commentary can be added to the movie. The backup function enables the main camera image and the picture-in-picture video to be recorded as separate scenes so that each can be played back on their own, if required.

All models also feature the Wireless Twin Camera function, allowing you to use a Wi-Fi connected smartphone or tablet as a sub camera. This gives you the ability to remotely record from two angles at exactly the same time, providing a wide variety of ‘Picture-in-Picture’ videos.

Perfectly balanced, all the time

Panasonic’s original Level Shot function, which automatically detects tilting and levels the image, is available in all these models. The setting can be adjusted to one of three levels (OFF, Normal, Strong) depending on the shooting conditions. The HYBRID O.I.S.+ (Optical Image Stabilizer) uses five-axis correction to thoroughly suppress blurring, whether you’re shooting wide-angle or powerful zoom shots, making it possible to capture crisp, clear images in almost every shooting situation.

The HC-WX970, HC-VX870 and HC-V770 camcorders also include a Baby Monitor feature, which enables you to check on a sleeping baby in another room with the camcorder connected to your home network with a smartphone. You can speak to the baby using your smartphone, or have notifications sent to your device when your baby’s crying voice, or other sound, is detected. You can also provide live streaming of video over the internet using USTREAM.

To learn more about Panasonic’s line of LUMIX Digital Cameras and other consumer electronic products please visit panasonic.com and www.lumixlounge.com.  You can also follow Panasonic on Twitter (@PanasonicUSA) and Facebook.