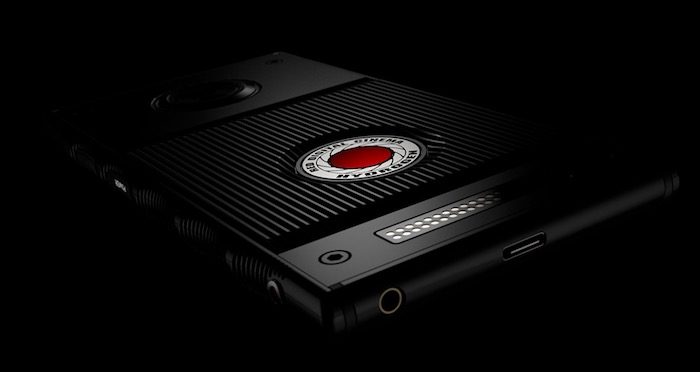 RED has announced the Hydrogen One smartphone, touting it as “the world’s first holographic media machine.”

The Hydrogen One is a smartphone running Android OS with the key feature being a 5.7″ professional hydrogen holographic display. RED says the display “features nanotechnology that seamlessly switches between traditional 2D content, holographic multi-view content, 3D content, and interactive games.”

RED also claims improved audio thanks to a “proprietary H30 algorithm tha tconverts stereo sound into expansive multi-dimensional audio.” The Hydrogen One includes a new high-speed data bus that will allow modular components to attach to the phone.

The Hydrogen One will also integrate into RED’s professional cameras (Scarlet, EPIC and Weapon) as a user interface and monitor. RED is apparently working on a new channel to find all 4-view holographic content. There, you’ll be able to create .h4v (or convert 3D to .h4v) content and upload it. You can also download or stream content, including movies, documentaries, games, shopping and other apps.

As I read this news today, I thought it was eerily similar in the overall feel to the DSMC hype from 2008. RED has done a lot in the imaging realm. Despite the hype, however, RED has yet to produce a viable consumer-ish product.

We were tossed and teased for months about a DSLR-killer from RED as Jim Jannard continually updated specs and promises about what the EPIC, Scarlet and other cameras would be. In the end, RED cameras became somewhat more affordable than they were with the RED One; however, you still have to sink $20,000 or so into a base-model camera to have a fully functional product. Not quite the DSLR-killer we were promised.

I suspect RED has some pretty cool tech put together for its new Hydrogen One smartphone. However, I remain plenty skeptical what this device looks like if and when it comes to market.