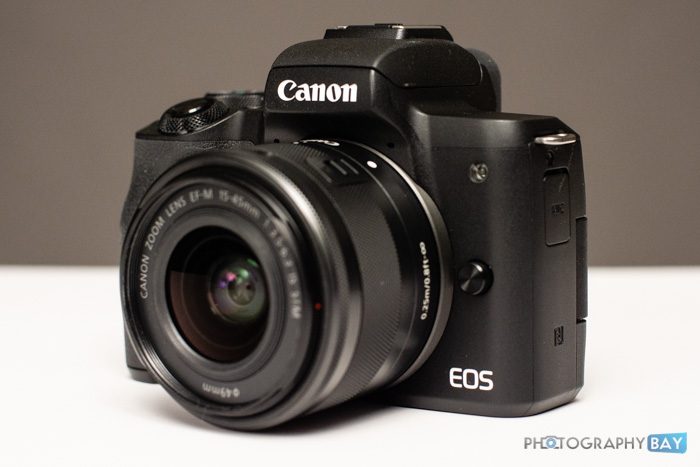 The Canon EOS M50 is the first Canon mirrorless camera that I’ve really felt comfortable using. Everything works as expected and you get a great image from its 24.1MP image sensor. It’s also the first “affordable” camera in Canon’s DSLR and mirrorless lines that captures 4K video.

The Canon EOS M50 follows a number of mediocre mirrorless cameras in the EOS M line. The EOS M was promising but the autofocus was atrocious. The EOS M10 was much improved but still not up to snuff with Sony’s cameras. With the M50, I think Canon’s finally got something to legitimately compete with Sony’s entry- to mid-level mirrorless. However, Canon still has a long way to go to give the Sony A7 series a run for its money. 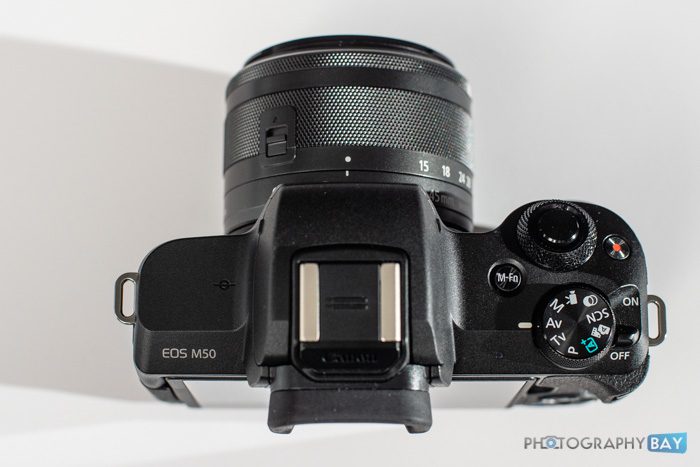 The design, grip and button layout are all very much Canon-ish. For the most part, I’ve always loved Canon’s ergonomics and the M50 is no different – even if it’s a little small for those of us accustomed to larger DSLRs. The menus are intuitive and work well with Canon’s excellent touchscreen – and I still don’t think anyone does a camera touchscreen better than Canon. If you’re coming to the M50 from a Canon DSLR, I think you will feel mostly at home with the M50. 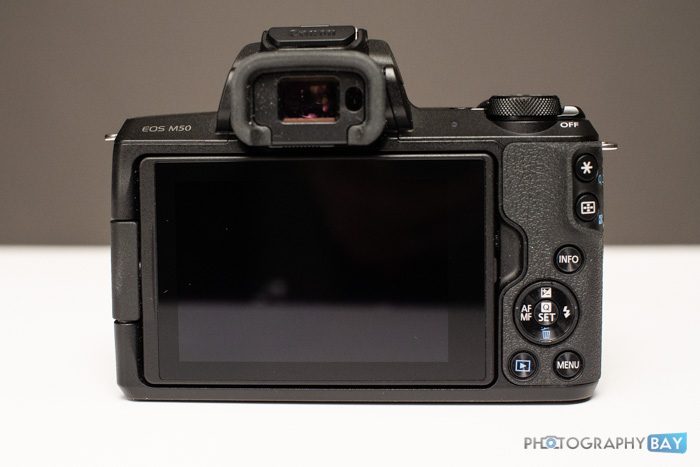 Autofocus is snappy and accurate in casual use. I’ve not tested any serious AF tracking with sports or wildlife but I’m thinking more as a Canon Rebel expectation coming to the M50 than a 7D Mark II equivalent. Overall though, I’ve got zero complaints about the AF performance of the M50 for still images. In video, the Dual Pixel AF continues to be a hallmark of Canon cameras and performs well on the M50. However, it is unavailable when capturing 4K video, relying instead on the old contrast detection AF system.

While we’re talking about the 4K video, it’s nice but it’s not perfect. The fact that Canon offers 4K/24p capture on the budget-friendly M50 is a big deal – perhaps signaling for the rest of Canon’s camera line that 4K is no longer an exclusive “premium” feature (like most of the camera market has already acknowledged). The downside, however, is that the M50’s 4K capture is only available in a 1.7x crop, which is a bit of a problem since we’re already dealing with a 1.6x crop on the APS-C format sensor.

In practical use, this means that the 50mm lens, which already feels like an 80mm lens thanks to the 1.6x crop factor of the sensor, now feels like a 136mm lens when shooting 4K video thanks to the additional 1.7x crop. Accordingly, the 4K video capture is much less useful than the key spec highlights might suggest. 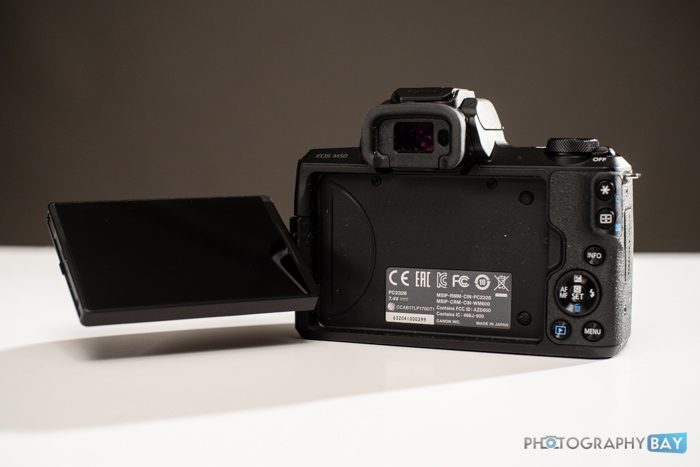 The M50’s still image quality is solid for an entry-level camera. The colors are accurate and vibrant out of the camera. Current Canon shooters will be happy with the results the M50 produces. While the M50 has few native lenses to choose from, you can make use of the EF-M Lens Adapter to mount your existing EF and EF-S lenses on the camera. It adds a bit of bulk to the compact mirrorless form factor of the M50 but you don’t really lose much functionality as most Canon lenses I’ve used perform admirably on the M50. 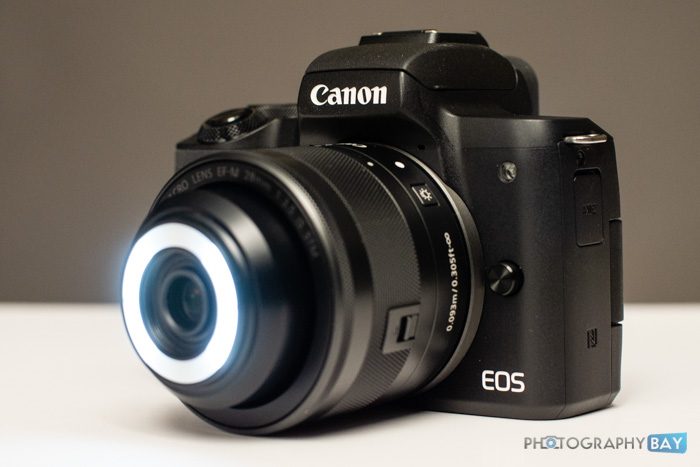 In addition to the EF-M 15-45mm f/3.5-6.3 IS STM lens that ships in a kit with the M50, I also tried out the very interesting EF-M 28mm f/3.5 Macro IS STM lens on the M50. The 28mm Macro has a unique built-in LED ring light that is powered from the camera body. You turn the light on and off by pressing a button on the lens barrel, which also cycles the output from high to low. This light is powerful enough for macro subjects only. You’re not going to throw light several feet to light a portrait with it. 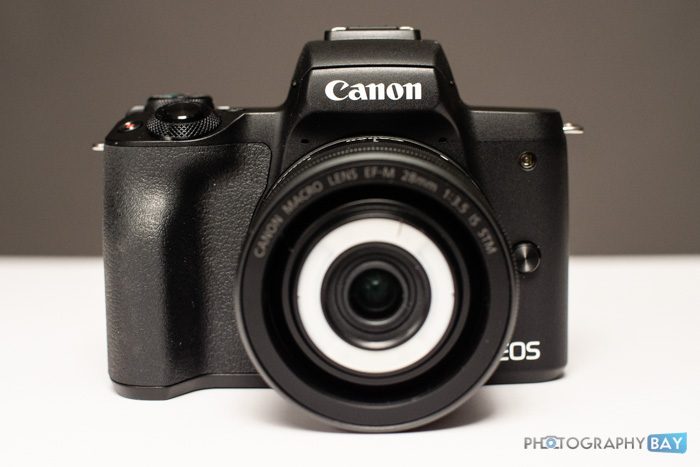 The 28mm Macro has a supermacro setting that gets you 1.2x magnification from 3.7″ away, which is really where the ring light comes in handy. At that close of a distance, your camera’s presence is likely going to affect your lighting. On a DSLR, you would typically use an externally-mounted ring light or macro strobe. In keeping with the compact theme of mirrorless camera design, having a light built into your lens makes perfect sense. This is a fun, sharp and affordable lens that is a great addition to the EF-M lense lineup. 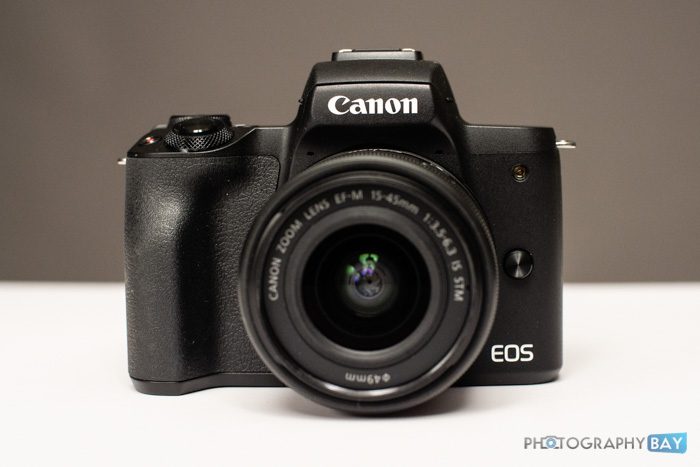 While the M50 is a solid little camera for the price, Canon has effectively set the bar for future DSLR and mirrorless camera offerings. Going forward, Canon can no longer justify the release of a DSLR or mirrorless camera without 4K video capture. For the price and features, the Canon EOS M50 offers a good value as a still image shooter. As long as Canon keeps adding to the lens and accessories in the EOS M product line, the M50 will be a good camera to grow with.