Photo Review has posted its review of the Pentax K200D.

Pictures from the test camera had a superficial resemblance to our test shots from the K20D, particularly with respect to the extended dynamic range provided by both cameras. However, the K200D showed less inclination to bias exposures slightly in favour of recording highlight details and the yellow-brown cast we found in test shots taken with the K20D shots was much less evident.

Pentax has announced a Student Photography Program, which essentially is a rebate program through June 30 for qualified students and teachers.  If you think you might qualify, check out the details in the press release below.  You could get $100 back on a K20D, among other savings on lenses and bodies. END_OF_DOCUMENT_TOKEN_TO_BE_REPLACED

Forum members at www.pentaxforums.com plan to shoot locally on that day and submit images to a central website. Named “PENTAX WORLD DAY,” the global shoot is not intended as a competition (there are no prizes), and it is organized just for the satisfaction of shooting and sharing images with other forum members.

Images must be captured on PENTAX Day (April 5, 2008) between midnight and midnight. Photographers may submit up to three photos. Photos must be taken with a PENTAX camera and should be between 800 and 850 pixels wide or tall, depending on orientation. Photos may be no larger than one megabyte in size. Please leave all EXIF information intact. Images may be submitted from 4/5/2008 to 4/19/2008. After this period, only viewing will be allowed for this category.

Here’s the new ad for the Pentax K20D and K200D, which features their weather resistant qualities.  Ned Bunnell, President of Pentax Imaging (USA), announced this new ad yesterday on his blog. You can get the full size .PDF from this post.

The Pentax K20D is in stock and now shipping (as of 8:00 a.m. ET) from Amazon, B&H Photo and Adorama. The K20D is priced at $1299 at all three vendors; however, you can get free shipping with Amazon. These are the only vendors that I shop at online. If you have a preferred place to order from, then it’s probably in stock there as well. However, I can personally recommend the buying experience from each of these trusted vendors.

To learn more about the K20D, check out Photography Bay’s Pentax K20D page. 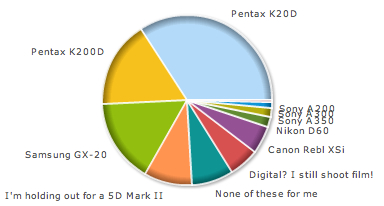 Last week, Photography Bay asked which new DSLR you’re buying.  After over 1800 responses, it appears that the new offerings from Pentax/Samsung are the most popular among Photography Bay readers, capturing about 66% of the total votes.  Additionally, 8% of responders don’t intend to purchase on of these new-fangled cameras and 6% still shoot film.

Take a look at all the numbers on the original post.  (Click “view results” at the bottom of the poll)

PopPhoto has posted a full review of the Pentax K20D.

Impressive specs? Yes, but the K20D produced impressive results in the Pop Photo Lab, especially in resolution and detail at most ISOs. At 2350 lines of resolution at ISO 100-400, the K20D delivers slightly higher resolution than the Nikon D300.

Get the latest news and reviews on the Pentax K20D Review page.

All in all, the Pentax K20D is a decent camera with enough features to keep top-end enthusiasts, travel photographers and possibly even some pros happy. It’s not the 14.6megapixel sensor that makes this the camera what it is, that almost doesn’t matter – it’s the combination of intuitive layout, functions and relative ease of use.

Pentax’s 14MP K20D is a great choice for a midlevel SLR and offers a lot of bang for the buck.

It really does capture a great deal of detail and unlike Sony’s 14 Megapixel sensor and processing engine, this detail remains at higher sensitivities.

If you have a collection of Pentax lenses, you’ll love the new AF Adjustment custom function, which allows you to precisely calibrate each one to the K20D, and the Dust Alert feature shows you exactly where the dust is on the sensor. Studio photographers can now seriously consider the K20D because of the welcome addition of an X-sync socket, and the camera still offers dust and water-resistance and effective anti-shake and dust-removal systems.

With the launch of the K20D Pentax is taking on the top players in the semi-pro DSLR market. It has a class-leading specification, with build quality, handling and performance to match, and has exactly the sort of features that will appeal to advanced amateurs and semi-professionals.

The bottom line is that the K20D has one of the most complete feature set of any DSLR. It brings some unique features and exposure modes into a very thoughtful and ergonomic design. Plus, since image quality and performance are great, there is no doubt the K20D is a worthy digital SLR.

Resolution remained high at all ISO settings up to (and including) ISO 1600 but declined sharply thereafter. . . .  Image noise became visible at ISO 1600 when shots were enlarged to 100% but was increasingly obvious as sensitivity was increased.

Impressive specs? Yes, but the K20D produced impressive results in the Pop Photo Lab, especially in resolution and detail at most ISOs. At 2350 lines of resolution at ISO 100-400, the K20D delivers slightly higher resolution than the Nikon D300.

We’ve just begun our full lab test with an early production Pentax K20D and out initial findings show that the Pentax K20D is very class competitive (particularly at ISOs 100-1600) against other cameras in this category including the Canon EOS 40D, Sony Alpha 700, and the Nikon D300.

Some of the upgrades and additions are good and will be useful, but there are some that seem to be hardly worth the effort. Would it have been too difficult to fit a 3in screen? Then they could have given it a better pixel count than 230,000 keeping it in line with the newer DSLRs from other manufacturers.

Pentax has been kind enough to let us soend a little time with an early sample of its latest DLSR, the K20D. It’ll be familiar to anyone who’s held a K10D but has a number of added features to keep it competitive in its increasingly crowded market segment.

The Pentax K200D is a capable digital SLR, a very good choice for consumers who are starting to chafe against the limitations of a point-and-shoot digital camera and want to work with a more advanced camera.

With its agreeable mix of automatic and customizable features and its top-shelf image quality, the Pentax K200D is an excellent camera for DSLR newcomers and more sophisticated lensslingers who want robust performance in a compact interchangeable lens format.

While there are a number of aspects to weigh-up, the choice between the K200D and rival DSLRs really boils down to how much you value build quality and Live View. If you want a tough, weatherproof DSLR at a low price, then buy the K200D. If however you’d prefer a smaller, lighter DSLR with Live View capabilities, then go for one of its rivals.

The Pentax K200D is a great digital SLR for beginner, amateur or casual photographers. It’s a very well built camera that reaches out to the beginner crowd. But there are also plenty of “pro” level features that a photographer can grow into.

Just like the Pentax K100D Super, the K200D ticks very nearly all of the boxes for those wanting an easy to use DSLR that delivers images you’ll want to keep straight out of the camera, and with the minimum of user input and effort to boot.

Pentax’s K200D entry-level SLR gives a lot of bang for the buck and has better performance than last year’s model. Despite low noise and pleasingly detailed images, technically inaccurate colors keep it from capturing the gold medal for image quality.

The handling of the K200D is very simple yet it maintains a reassuring, more professional build quality. Images are sure to please even the most critical photographer, with few serious problems bar slight underexposure on rare occaisions.

Pictures from the test camera had a superficial resemblance to our test shots from the K20D, particularly with respect to the extended dynamic range provided by both cameras. However, the K200D showed less inclination to bias exposures slightly in favour of recording highlight details and the yellow-brown cast we found in test shots taken with the K20D shots was much less evident.