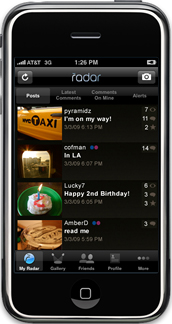 “We have a long-standing affinity with the Flickr team and the massive photo community they’ve built, and we’re very excited to be able to offer the Radar mobile experience to Flickr users as well,” said John Poisson (http://radar.net/people/fugu), Founder and CEO of Tiny Pictures. END_OF_DOCUMENT_TOKEN_TO_BE_REPLACED