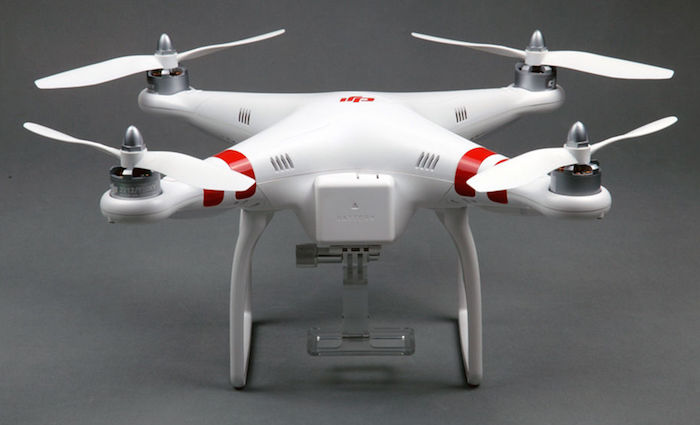 The DJI Phantom can be a blast to fly and you can get some great aerial photos and footage. However, setup and configuration can be intimidating for those new to radio controlled systems.

One problem I recently encountered with a DJI Phantom ver. 1.1.1 was the repeated flashing yellow lights on a brand new unit. Supposedly, these ship from the factory with the transmitter and onboard receiver already bound together and you should be able to pull it out of the box, go through rest of the setup processes and start flying.

In this case, it wasn’t so easy. Since someone brought the Phantom to me and explained their frustration with the problem, I went back to the beginning and began to work from scratch. In doing so, I found a very nuanced problem that does not appear anywhere in DJI’s official documentation for the Phantom.

In troubleshooting the problem, you will find that the Phantom’s Advanced Manual describes how to link the transmitter if, for some reason, they become unlinked. See the following screenshot. 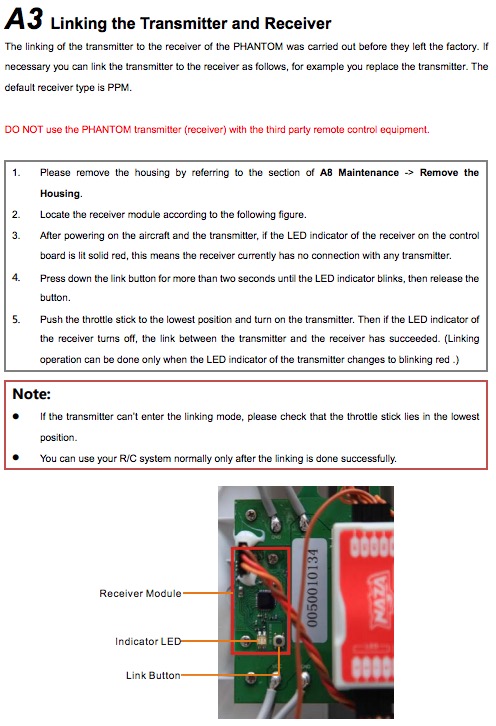 But wait a second.

Earlier Phantom’s required you to remove the entire housing to access the link button as you see in the Advanced Manual excerpt above.

More recently manufactured models, however, allow you to access the button by opening the battery door. The link button is mounted on the bottom of the circuit board shown in the instructions above. You can easily reach this button without disassembling the Phantom’s housing. 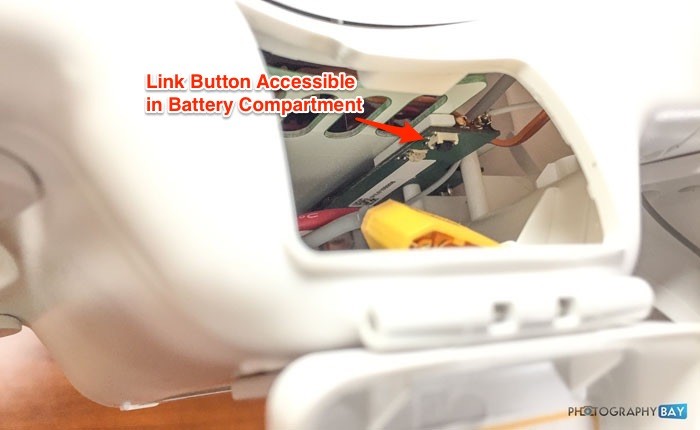 Look in the Battery Compartment First

Of course, if you don’t see a button in the battery compartment, you will have to take the Phantom’s housing apart to access this button on the other side of the board.

If linking the transmitter and receiver using this method solves your problem, then great. Enjoy flying.

However, if you are sure you followed these instructions and you still see the flashing yellow lights, you may have the same problem I encountered.

Plug in your Phantom to your computer via USB and open the latest version of the Naza-M Assistant Software. If you don’t have it installed, you can find it here on DJI’s website.

Go to the Basic tab, then the RC tab. Now, in the Receiver Type box select D-Bus instead of PPM. See the screenshot below. 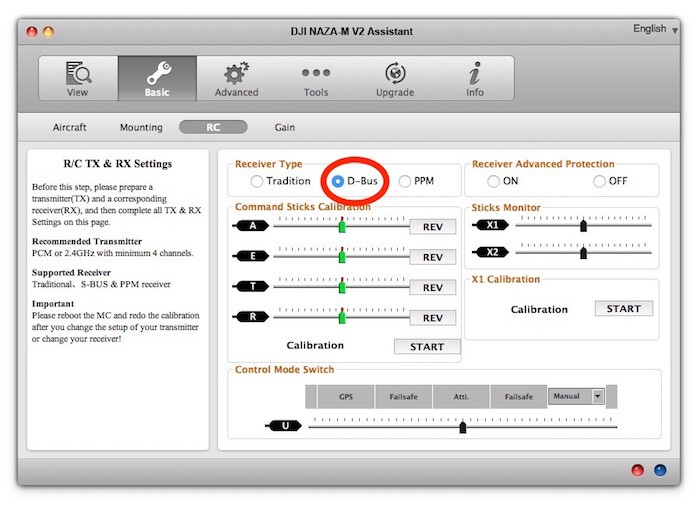 I have not been able to verify the details; however, it appears that older versions of the first generation Phantom used a PPM receiver and the new version 1.1.1 uses a D-Bus receiver, which creates the problem for the transmitter failing to bind with the Phantom. Additionally, I am not sure why this ships from the factory this way. Perhaps the firmware update was applied near the end of the packaging process.

PPM appears to be an older analog system using a single antenna with the Phantom, while the D-Bus type is a digital system using dual receiver antennas. Accordingly, there is physically different hardware being used on different versions of the first generation Phantom.

I have read other peoples accounts of this problem in various forums. Some people figured it out and some simply returned their Phantom to the retailer. I wanted to share this experience to help anyone experiencing this problem since it is not really documented in DJI’s own materials.