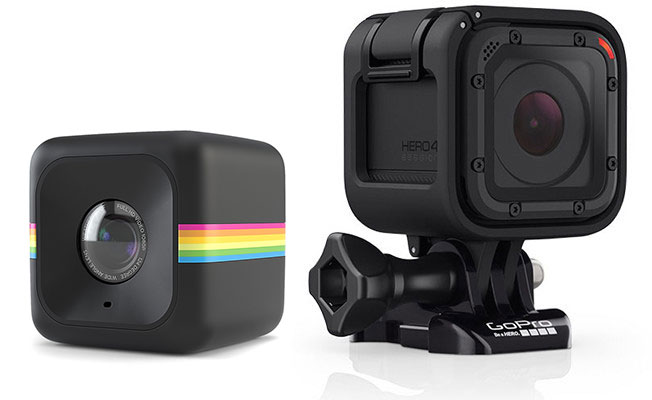 I said as much in my coverage of the HERO4 Session announcement coverage:

It is a small 1.5? cube camera that bears a striking resemblance to the Polaroid Cube. Consequently, Polaroid launched its next generation Cube+ camera today as well – although I don’t think it will be getting the same attention as GoPro’s new camera… [See original post]

For its part, GoPro says that it had plans for the HERO4 Session well before C&A ever introduced the Polaroid Cube to the public.

GoPro’s stock has taken a major hit this year as the HERO4 product line failed to deliver the expected sales numbers. It was down over 2% after the news of this latest lawsuit broke.

Another market force that may have affected GoPro’s dwindling numbers is the integration of cameras on drones by first-party manufacturers. DJI and Yuneec, among others, both have high quality 4K cameras integrated into their flagship drones with other lower-end models offering more modest HD cameras built-in.

With drone customers no longer needing to purchase a GoPro camera to record aerial video, an entire market has dried up for the action camera maker. Those worries may soon lessen though as GoPro is planning to release its own line of consumer drones equipped with GoPro cameras in the first half of 2016. Last month, GoPro teased footage from a prototype model that proves promising.

While the Polaroid Cube was first to market with a cube-shaped action camera, I think its safe to assume that it pales in comparison to the reach of the GoPro HERO4 Session. Now, C&A wants to shut down sales of the Session and receive all of GoPro’s profits for the camera to date.