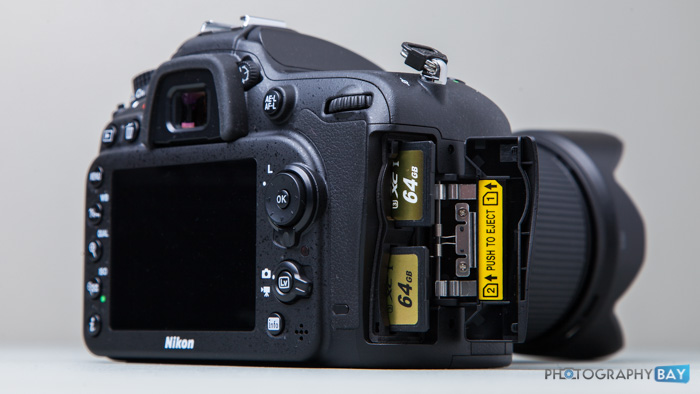 The Nikon D7200 accepts most modern SD cards, including SDHC and SDXC cards, and takes advantage the speed boost from UHS-I (Ultra-High Speed Type I bus) cards. For a broader explanation of SD card types and designations, see my prior article Demystifying SD Cards.

Below, I have tested a few different memory cards in the Nikon D7200 to demonstrate the positive effects of buying a more capable memory card and to highlight some specifications of particular cards that might make them a better fit for the D7200 and similar cameras.

The performance chart below should be pretty self-explanatory but let me detail it out a little further for the sake of clarity. We have the product labeling to identify it as accurately as possible. SD cards are a mess with their symbols and abbreviations, which is why I wrote the Demystifying SD cards article mentioned above. In addition, I provide a link to a reputable online vendor for the specific card in the first column and further specify the bus-type and class ratings for the card, as well as the capacity.

With each card, I performed three tests in camera and one test on the computer to help verify the numbers and performance we see in camera. The initial burst is often cited as the biggest spec feature and I have it listed, along with the frame rate provided. Additionally, I spell out what happens after the initial burst in terms of continuous frame rates after things slow down. The final numbers show the actual sustained read and write speed to read and transfer a 1GB file using the Lexar Professional Workflow HR2 Hub with the UHS-II Card Reader connected via Thunderbolt to my iMac. File sizes average at roughly 26MB for .NEF raw file and about 13MB for .JPG files.

For the money, the Transcend 64GB UHS-I Speed Class 3 card (with the 85MB/s write speed label) is one of the best cards you can get now for UHS-I devices.

Of course, the place where you will see a serious advantage with the Lexar UHS-II card is during import. If you are using the included UHS-II card reader or the Lexar Professional Workflow HR2 Hub with the UHS-II Card Reader, then your transfer speeds are going to be blazing fast and save you time managing media. Lexar’s UHS-II card really isn’t that much more than the fast UHS-I cards out there, so the post-production benefit may be well worth the additional cost.