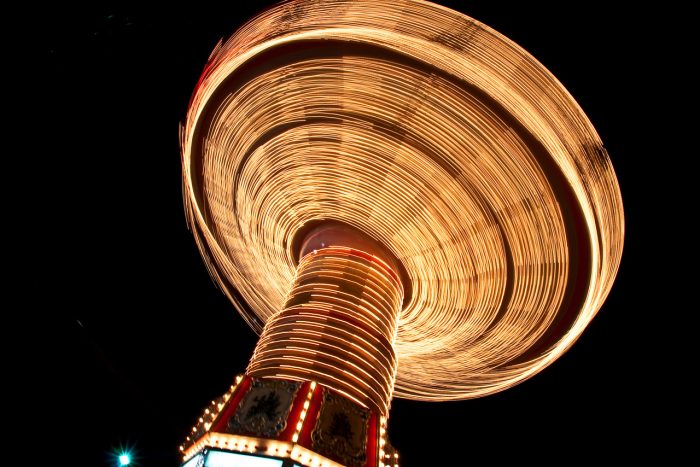 In our last Photography Basics article, we took a look into the basic principles of aperture and lens speed.  We learned that the aperture of a lens is a critical component to a properly exposed photograph and powerful composition tool.  In this article we are going to examine the fundamentals of shutter speed and how it will affect your images.

Hopefully, we will also be able to answer that frequently asked question . . . why are my photos so blurry? Frequently, the culprit is our shutter speed.

This rule of thumb applies for handheld use of your camera only.  There are may other ways to use a slower shutter speed than the reciprocal of your focal length and still get acceptably sharp images.

You can put your camera on a tripod for the ultimate stability for even extremely long exposures.  A monopod can also provide a stabilization platform, which also allows you to perform fast action panning (discussed below).  Finally, several lenses and cameras are available with electronic image stabilization systems that compensate for camera shake and allow for the use of slower shutter speeds, even when using the camera handheld. 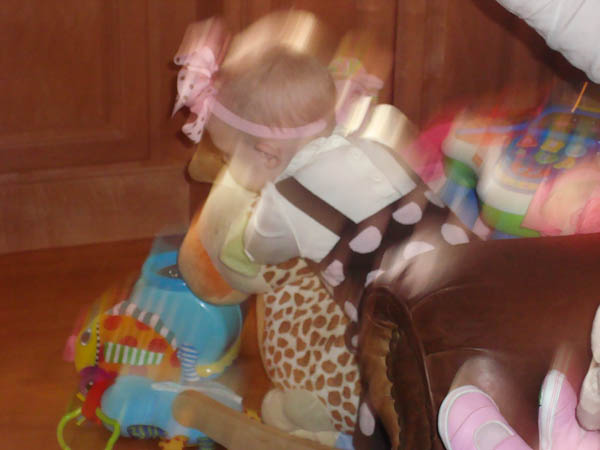 The above image is blurry because of camera shake.  How can we tell?  Because the static subjects are blurry to the point of suggesting motion.  See how the toys have light streaks?  That is a result of camera movement, and not the movement of the toys.

A word about “crop factor” and camera shake:

If you have an entry-level DSLR, then it is likely that your sensor is an APS-C format, which means it’s smaller than a 35mm frame.  What this means is that your lens focal length is magnified (or cropped) by roughly 1.5x. As a result, a 100mm lens looks like a 150mm lens.

Because of this “crop factor,” the rule of thumb mentioned above should also be modified (or magnified by 1.5x).  So, the 60mm lens example above would mean that your minimum shutter speed would be 1/90 of a second on an APS-C camera.  That’s a lot of math though…

Want to know what I do to avoid all the math when I’m trying to take hand held photos?  I just double that focal length number.  That’s right.  Instead of trying to multiply the focal length by 1.5, I just double it.  With a 60mm lens, I know that my shot is good with a 1/120 shutter speed or better (it will actually be a 1/125 setting in the camera).

You can get a blurry subject if your shutter speed is too slow.  While it can be an artistic decision to use motion blur, it is often an undesired result.  Common examples of motion blur arise from children playing indoors or trying to freeze subjects in sports. 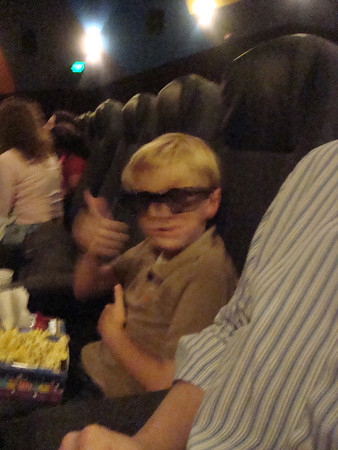 The above image was captured with a point and shoot camera at a shutter speed of 1/4 of second at an equivalent focal length of roughly 30mm.  While you can see the static portions of the image (theater chairs, people in the background, my arm in the foreground, etc.) remain relatively sharp (thanks to image stabilization), the main subject, my son, was moving his head and giving an enthusiastic thumbs up as we waited for a 3D movie to start.  He is the definition of motion blur (even when a camera isn’t aimed at him).

To freeze the subject, you need to use a shutter speed that is fast enough to stop the action.  In order to freeze kids, you need to choose your shutter speed wisely.  The number can change depending on what the kids are doing and how close you are to them.  I would suggest starting at 1/125 of a second and move up and down from that point based on your on situation with the kids (or whatever subject) in order to eliminate unintended motion blur.  Obviously, sports shots will require a higher shutter speed, while snapshots of the kids eating breakfast can be much slower.

Again, it is part of the photographer’s artistic expression to decide how “frozen” that a subject should appear.  You can create some really cool images with motion blur when you grasp the concept of what is going on inside the camera.

Here’s an example of one of my favorite uses of motion blur. 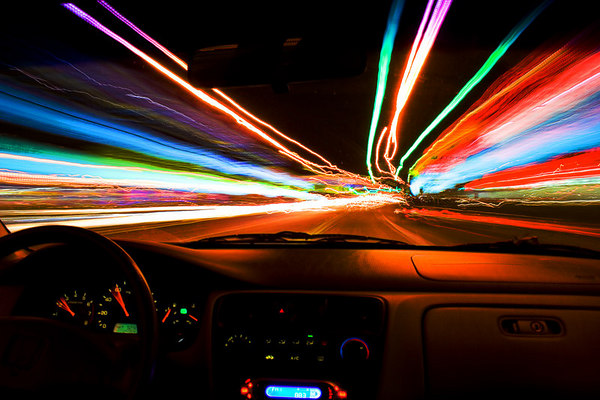 I shot the above image from the inside of my car with the camera mounted on a tripod in the back seat.  I used a remote to trigger the shutter so that I could keep my eyes on the road.  The exposure was 10 seconds long at an aperture value of  f/16.

Other good uses of motion blur that come to mind include fireworks shots at night, which are often shot from a tripod at longer shutter speeds of 2-4 seconds long. 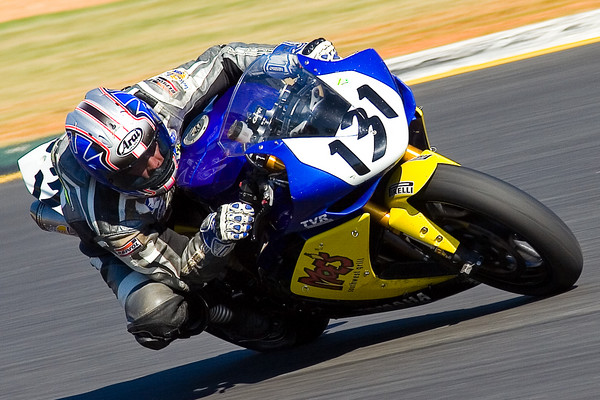 One way to make creative use of motion blur is to pan your camera along with a moving subject.  If your panning technique is sound and you use a slow enough shutter speed while doing so, the subject of your image will remain sufficiently sharp while the background is blurred from the movement of the camera and lens.  This is one way to create a sense of motion with your shutter speed. 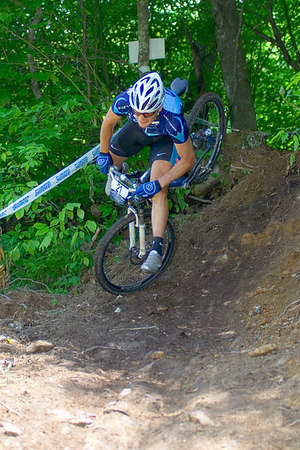 Another way to create a sense of motion with your shutter speed is to use a fast shutter speed to “freeze” the subject in action. Creating a sense of anticipation is a great way to get the most out of your fast shutter speed. This does not work with every situation and, quite frankly, can produce very peculiar results with some subjects and types of actions.

Contrast the image of the Aston Martin DB9 at the Petit LeMans below with the mountain biker above. You know what is coming with the mountain biker – he’s about to eat some dirt. And, somehow, the fact that he is about to face plant into the ground may even be more compelling than when he actually impacts the ground. I think this is all about the anticipation of the moment – the unknown.

Now look below. Even though the Aston Martin is racing into turn 9 at Road Atlanta, my shutter speed of 1/1000s was far too fast to convey any sense of motion here. In my view, this is a circumstance where a fast shutter speed is unwarranted and, actually, makes the subject less attractive. There is no sense of speed, and the car might as well have been parked. 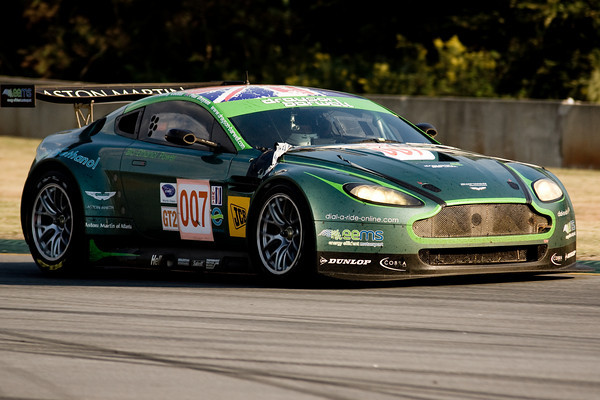 When you freeze a subject, you still need to convey the action and you do not want to make the subject static or awkward. The motion of the subject still needs to be clearly conveyed so that it does not look like they are simply hanging in mid-air when they are performing a wild jump, or they are leaning awkwardly when, in fact, they are in an all-out sprint.

Think about some of the great sports moments you have seen in photographers.  Here are a few that come to mind:

The football receiver stretching out for a catch as the ball is contacting or about to contact his hands.

The baseball player striking the ball with his bat.

The swimmer with his head just above water taking a deep breath in between strokes (… think Michael Phelps in the Olympics).

The soccer goalie diving for a save.

How to Set Shutter Speed on Your Camera 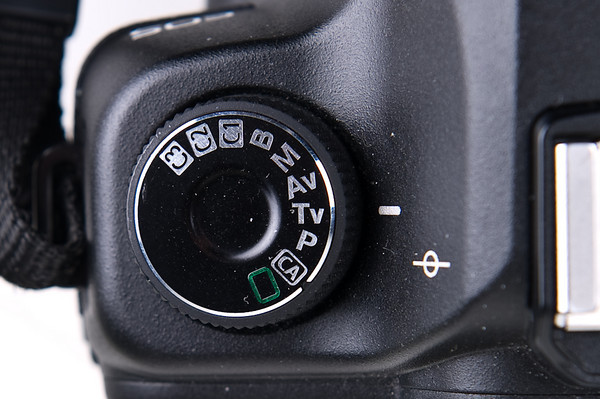 In many of the modes on your camera, the shutter speed value is set automatically.  On DSLRs and many point and shoot cameras there is a mode called Shutter Speed-priority mode that is typically marked with an “S” or “Tv” on the mode dial.

By turning your mode dial to Shutter Speed-priority, you take control of the shutter speed setting and let the camera choose the appropriate aperture value in order to obtain a proper exposure.  When in Shutter Speed-priority mode, you can adjust the shutter speed value throughout the entire range that the camera can shoot.  These values generally range from 30 seconds to as fast as 1/8000 of a second on some cameras.

Additionally, many cameras will permit you to shoot on a Bulb setting, which allows you to open the shutter for an arbitrary amount of time.  The shutter speed is based solely on how long you hold down the shutter button.  Due to the obvious concerns of camera shake, shooting in bulb mode is usually done with the aid of a tripod and a remote shutter release.

If you’ve struggled with the concept of shutter speed, I hope this helps you understand what we mean when we talk about different aspects of camera shake, motion blur and exposure settings.  Now, go pick up your camera and enjoy Shutter Speed-priority mode.

Additionally, if you have not read it yet, consider reading: