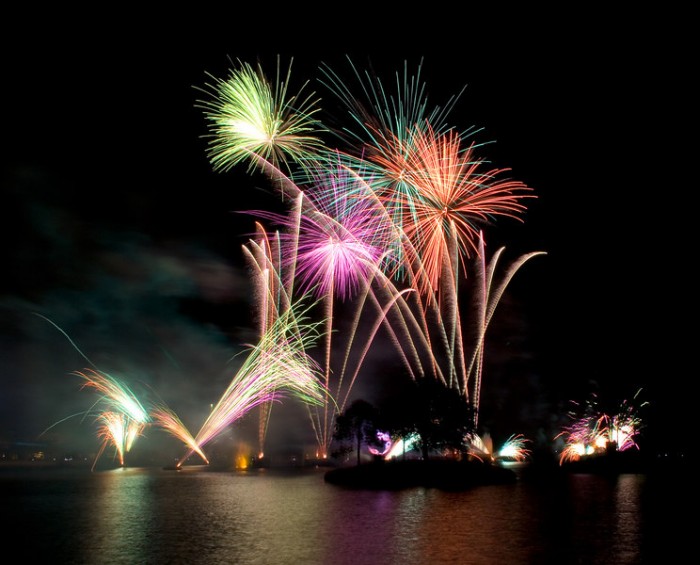 With the Fourth of July coming up next week, a lot of folks are looking to get some great shots of some of the awesome fireworks shows around the country.  With that in mind, here are a few fundamental tips and settings to help you get it right – even if you don’t have a tripod with you during the fireworks show.

1. Use a Long Shutter Speed 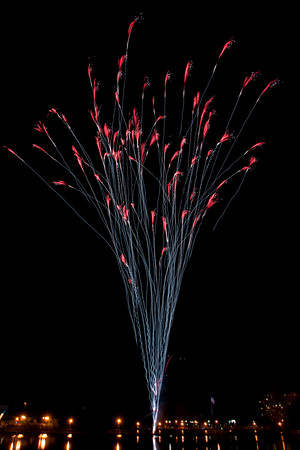 Long shutter speeds give you the light trails that make fireworks shots look so spectacular. You are also more likely to capture multiple fireworks popping in a single frame.

Note that the top image was a 4 second exposure, which allowed me to get several fireworks bursts with the complete light trails.  Going beyond 4 seconds is a little risky when shooting handheld (see tip # 7) because of natural movements (like breathing and such) that are hard to suppress for much longer.

If you’re on a tripod, you can try a longer shutter speed and capture even more fireworks bursts in a single frame.  Cover the lens with a dark cloth or t-shirt when fireworks aren’t popping during very long exposures to reduce noise and overexposure of ambient light sources – just don’t move the camera.

Learn more about how to use shutter speed in this article – Photography Basics: Shutter Speed.

2. Use a Small Aperture

Using a small aperture (like between f/8 and f/16) means that less light gets in through the lens.  As a result, the colors in the pyrotechnic displays are preserved in the exposure.

If you use a bigger aperture, it’s going to affect your exposure by taking the color out of those beautiful light trails and making them white, as well as overexposing ambient light sources like street lights on the ground.

Learn more about how to use aperture in this article – Photography Basics: Lens Speed and Aperture.

By shooting at a lower ISO, you not only keep the exposure in the range that you are looking for with both the aperture and shutter, but you are also keeping nasty noise out of your low-light images.

This is the exposure combination that I’ve found works best for me to get the most keepers and the most satisfying images from a fireworks show.  Feel free to mix it up as you see fit, but if you start losing color or you aren’t getting enough of a light stream in your fireworks, come back to ISO 100, f/16 and 4 seconds for a good starting point.

Almost all of the nice fireworks shots that I’ve taken or that I’ve seen elsewhere have been wide angle shots.  It’s nice to have the light trail from the ground to the full burst in the sky. Another advantage for handheld shots is that a slight camera movement affects a wide angle shot less so than it will a telephoto shot (where camera shake is magnified).

So, when you are looking for a good vantage point, think about what will be within the view of your wide angle setting on your lens.  If the crowds are starting to arrive, you may need to grab your spot early to make sure that your wide angle lens will have an unobstructed view of the scene once the fireworks start firing.

Of course, if you have a tripod, you can try zooming in and capturing some of the bursts up close for a different effect.  You exposure settings should remain pretty much the same, and you may walk away with something unique and abstract from the fireworks show.

5. Focus on the Ground, Shoot in the Sky 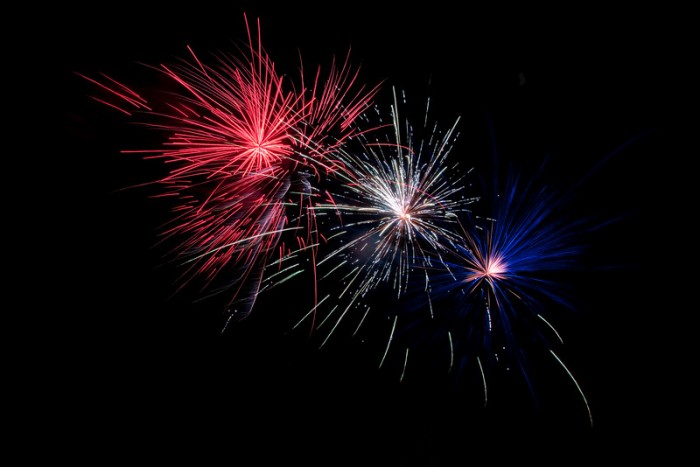 Every time I’ve done been to a fireworks show, there has been enough light around the ground crew before the show starts to use the camera’s autofocus.  Focus once, and then flip the switch on your lens or in your camera to manual focus. That way, you won’t have to worry about the camera autofocusing (or missing focus) during the show.

In the alternative, or if your camera won’t let you do the above suggestion, you can simply focus manually once and be done with it.  Chances are, you are going to be a good distance away from the show, so focus at infinity or use the hyperfocal distance if there is something in the foreground that you want to capture too. 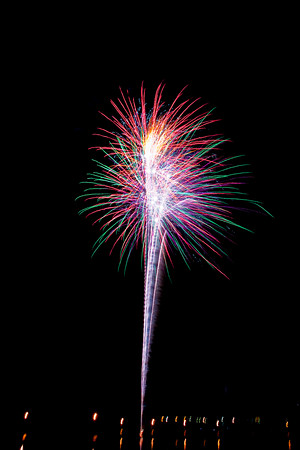 Because you are using a long exposure, it is critical that your camera stays steady during the full 4 seconds or so that the image is being captured.  If your camera moves during that long exposure, those crisps lines of light are blurred and the shot becomes a bit of a mess.

While the easiest way to do this is to use a tripod, I’ll let you in on a little secret . . . .  None of the sample images in this post were captured with the aid of a tripod – all were handheld.

Now, even though you can handhold a camera doesn’t mean you can do it without bracing against something.  And that’s the key…

In each of these photos, I was on a family outing that I didn’t feel like carrying a tripod along.  Normally, I would have a Gorillapod with me, but I was even without one of those on these outings.  So, I found a sturdy railing or post when the fireworks were ready to start and then braced myself and camera against the post or railing.

You need to find something that is sturdy and won’t be easily moved if someone bumps into it a few feet away from you.  As a result, some railings are better than others.

You’ll still get some blurry shots, but you should also be able to get a few keepers.  And, really, one great shot is all you are looking for.

Learn more about keeping camera shake to a minimum in this article – 4 Principles of Photography Marksmanship.

8. Remote Shutter Release with a Tripod

If you do have a tripod at your disposal, try using a remote shutter release.  A remote allows you to trigger the shutter without actually touching the camera.  As a result, you can frame the scene, nail your focus and not touch the camera again until the show is over.  You’ll have no worries about camera shake here.

9. Shoot a Ton of Photos 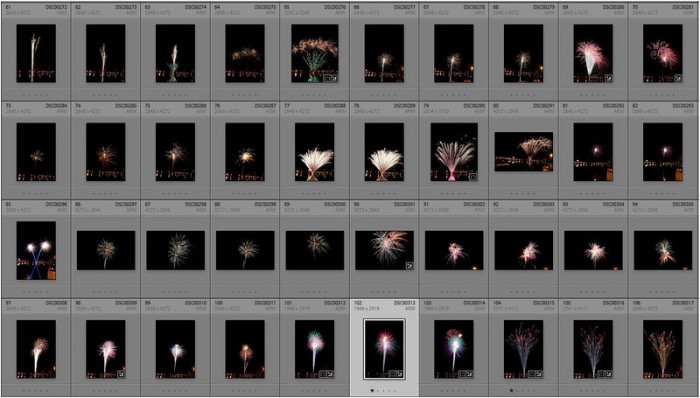 While timing plays a role in your shots, you’ll get the hang of how the fireworks pop after a few go off.  From then on, you need to be firing frames constantly.

You’ve got your settings down, and you are doing the best you can do to keep it steady without a tripod.  Now, you just have to capture that one series of bursts on a single frame that makes it worth your effort of breaking your camera out.

Got a fireworks photography tip to add? Drop it in the comments below.