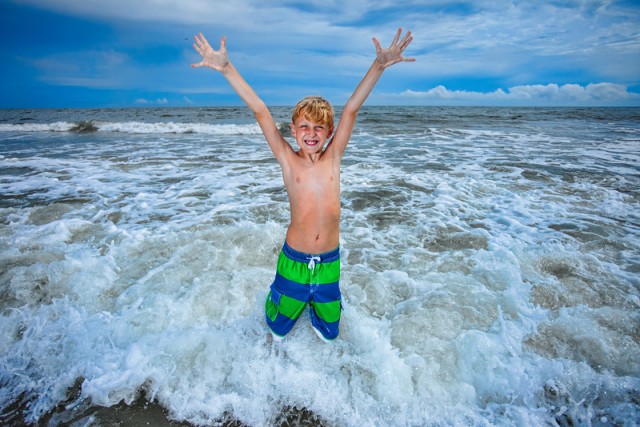 One of the challenges of shooting outdoor photos in the middle of the afternoon is dealing with harsh shadows and overexposing the sky if your subject is not directly lit by the sun.  While it would be nice to wait for the right light later in the evening, there are a lot of times when your subject won’t be waiting around with you – particularly when you’re dealing with kids.

On the day the above image was captured, I was running around on the beach with my 5D Mark II, 17-40mm f/4L and old 420EX tethered to the camera with a off-camera TTL cable.  I set my camera to aperture-priority at f/4 (and dialed down to -1 EV exposure compensation) and the set the ISO to ISO 320 in order to keep my shutter speed teetering on the edge of 1/8000s, which is the fastest shutter speed available on the 5D Mark II.

The biggest advantage of using a TTL system flash instead of a manual flash is the increased sync speed.  With a TTL flash, I can use Canon’s high-speed sync to get shutter speeds up to 1/8000s.  With a manual flash, I’m stuck at 1/250s or less.

So why does shutter speed matter?  Because these little speedlights cannot over power the Sun.  However, a fast shutter speed lets you cheat by limiting the amount of time that the Sun can deliver light to the sensor and affect your exposure.  At 1/8000s, the sun burns in an exponentially smaller amount of light than it does at 1/250s.  As a result, if you have a flash and camera that can deliver the same amount of light at 1/250s vs. 1/8000s, you can weight the exposure in favor of the flash with a lot less power at 1/8000s.

The faster the shutter speed, the more level the playing field for these little speedlights to compete with the Sun.

This brings me to the point of using the f/4 aperture.  The largest aperture I had available on the 17-40mm lens was f/4 – so that’s what I used.  Unless there is a creative reason for more depth of field, I generally shoot TTL flash shots at the largest available aperture because it means that the flash has to work a lot less.  At f/8, the flash would have to pump out more light in order to deliver the same exposure level.  This is why you hear the saying, “aperture controls your flash exposure and shutter speed controls your ambient.”

So that’s the nuts and bolts of the exposure.  I just held the camera in my right hand and flash in my left.  I told my son to play in the waves and snapped a few frames.  The fast shutter speed has the additional effect of stopping the motion of the waves, which I think works well for this image.  The only editing was applying the vibrance preset in Topaz Adjust, and then tweaking the default settings to my liking, and then a rotation crop in Lightroom before uploading the final image to SmugMug. 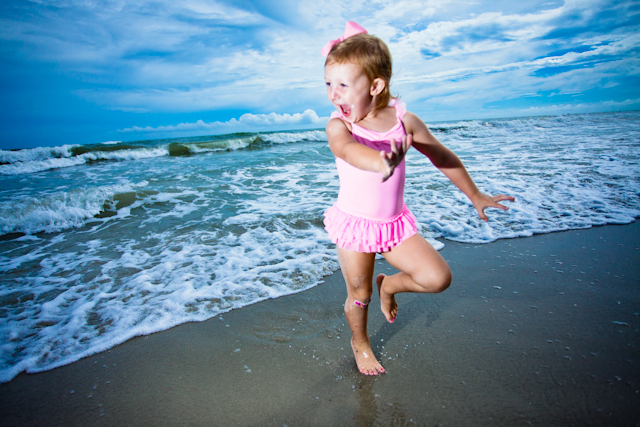 If you are interested in learning more about using TTL off-camera flash, I highly recommend a Joe McNally’s Hotshoe Diaries and Syl Arena’s Speedliter’s Handbook.  Joe uses Nikon gear and he talks about those specific settings in the book.  Syl uses Canon gear and the book is branded as more of a book for Canon shooters.  The principles are the same, however, and once you understand the basic theory of working with TTL flash, you’ll be able to pick it up with any system.