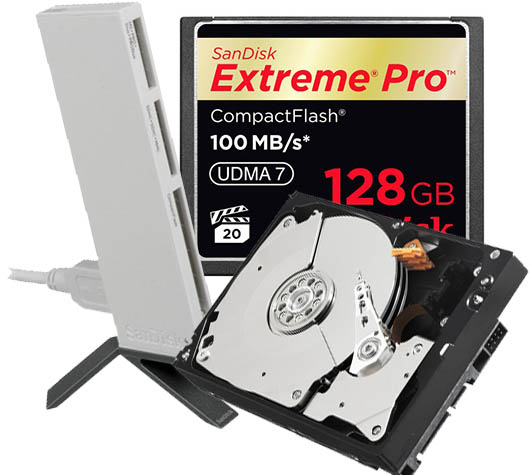 A common problem for many photographers is understanding memory card speeds, hard drive speeds and data transfer rates. It seems we’ve got all kinds of numbers, specs and measurements to look at when it comes to sizing up the speed of our memory cards and computer peripherals.

I recently received a question from a reader about a slow import process from his memory cards into Adobe Lightroom. He was using a USB 2 card reader and wondered whether that could be the culprit. And, if so, would upgrading to a new iMac with USB 3.0 and a Thunderbolt fix the problem if he had a USB 3 or Thunderbolt card reader? (To my knowledge, there are no Thunderbolt CF or SD card readers shipping at the time of this article. There is a Thunderbolt SxS card reader for the pro video market; however, it is currently listed as discontinued.)

Now, onto the specifics of his questions and to breakdown the technical jargon so we can make sense of how to get the fastest memory card transfers for our ever-growing file sizes…

USB 2 can definitely be a bottleneck; however, a slow card can also be a problem. Tracing the source of the bottleneck involves looking at which point has the slowest data transfer rate or read/write speed.

Data transfer (e.g., over cabling) is most commonly measure in Mb/s (or, megabits per second), while read/write speeds of memory cards and hard drives are discussed in MB/s (or, megabytes per second). One MB/s is equivalent to the transfer speed of eight Mb/s.

So, right off the bat we are looking at two different standards by which the speed of our peripherals is measured. This can make matching up camera and memory card speeds alongside transfer devices (USB 2 vs. USB 3 or Firewire) rather difficult.

USB 2 offers data transfer rates at a max of 480 Mb/s, which is equivalent to 60 MB/s. Accordingly, the fastest cards are faster than the best that USB 2 can give us. In those cases, USB 2 would be bottlenecking some speed. Additionally, that throughput number is a max number and not a sustained speed that you can expect. Effective sustained throughput for USB 2.0 is more like 280 Mb/s or 35MB/s.

USB 3 offers sustained data transfer rates of 5Gb/s, which is equivalent to 625MB/s. Currently, CF cards max out at around 125MB/s. The fastest cards available are XQD cards from Sony’s S-Series that peak at 168MB/s, which is still well below the USB 3 limit.

In many cases, our hard drives can also be a limiting factor. Run-of-the-mill spinning hard drives in laptops and desktops deliver anywhere from 60MB/s to 120MB/s read/write speeds in my experience. RAID 0 arrays and SSDs offer much faster options; however, these are not typical for most folks (note that SSDs are becoming more prevalent and will continue to do so). External Firewire 800 drives range from about 65MB/s to 85MB/s for most of the drives that I’ve tested. The latest bus-powered USB 3 drive that I tested offers about 115MB/s read/write speeds.

You can download a free app called “Blackmagic Disk Speed Test” to test your hard drive’s speed. Mac users can find it here on the Mac App Store. I don’t think it is available for PC; however, Windows users can use the Device Manager to drill down to the hard drive controllers, select Port and click on the Test button. If there is no “Test” option available for your drive, you can try the free Roadkil.net Disk Speed Test.

While we may see some Thunderbolt card readers in the near future, I think it will be quite a while before our memory cards catch up with the max read/write speed that would be necessary to see a practical benefit over USB 3.

In short, I’d say go for a USB 3 card reader and some fast cards. If you picked up a new iMac with an SSD, you should be able to eat the fastest of fast CF cards for a long time. Or, look at an external Thunderbolt hard drive in RAID 0 from Western Digital instead of an SSD and keep your image library off your main drive. (I got over 230MB/s read and write speeds in my tests with a single Thunderbolt Duo drive. And the new WD units with VelociRaptor drives claim up to 400MB/s read speeds.) That could get pricey, but fast is pricey sometimes.

I hope this clears up some of your bottlenecks in your memory cards, card reader and hard drive set ups.