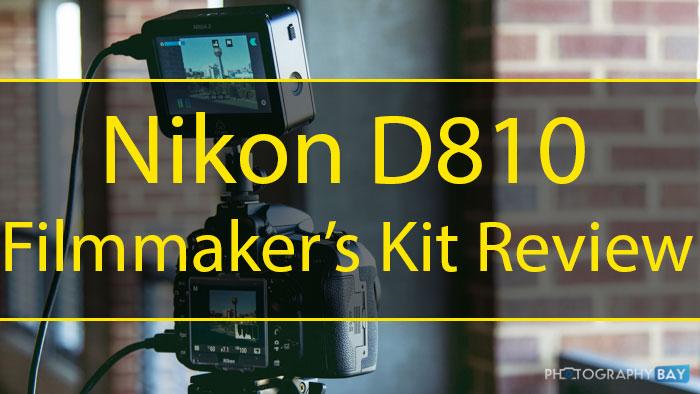 Nikon thinks the D810 is such a great HDSLR for cinematographers that it makes the camera available in what is called the Nikon D810 DSLR Filmmaker’s Kit, which is the focal point of this review.

While I will touch on plenty of things about how the camera performs as both a still image camera and a video camera, the goal of this review is to discuss whether the Nikon D810 Filmmaker’s kit is worth the asking price.

First, let’s look at all of the parts and pieces that make up the D810 Filmmaker’s kit. 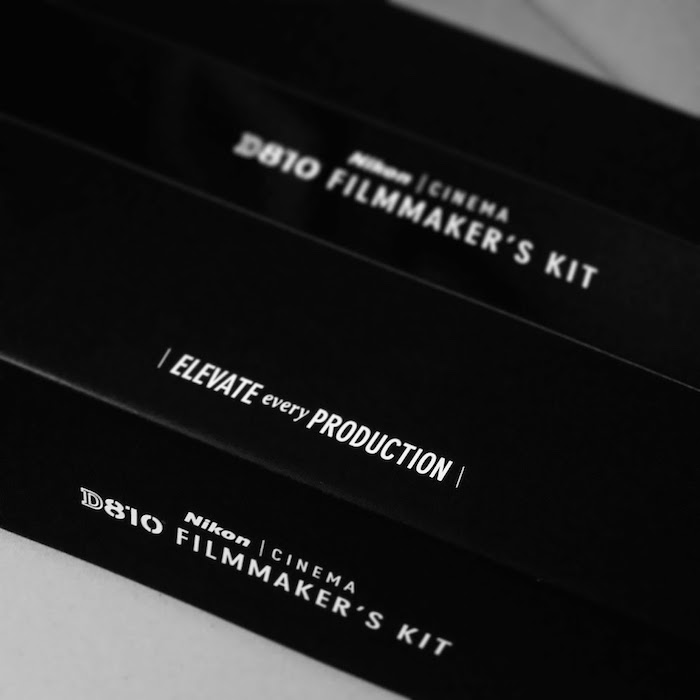 The presentation of the kit is nice. It comes in a large box that is fill with foam cutouts for the different pieces of gear. It looks great when you open the box. 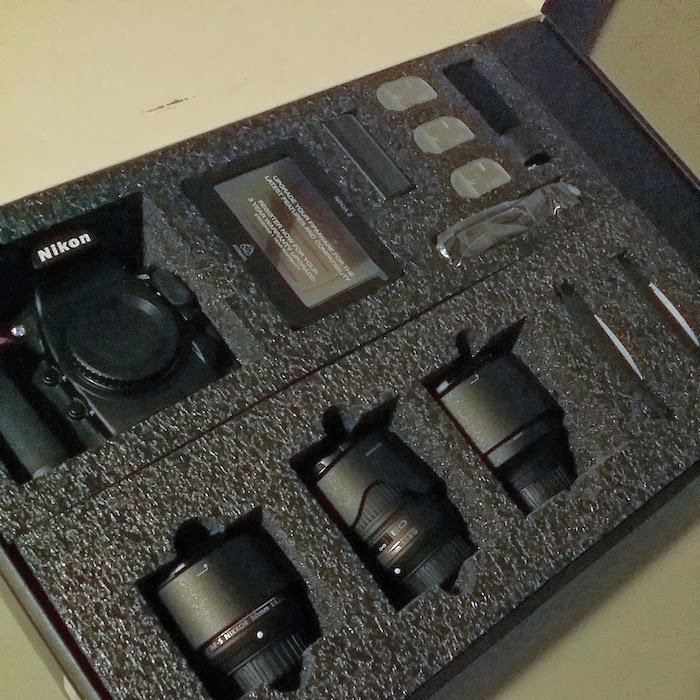 The downside is that the box and the great presentation are just for show. Because you are dealing with a cardboard box, it isn’t really usable. It’s just a pretty piece of trash. 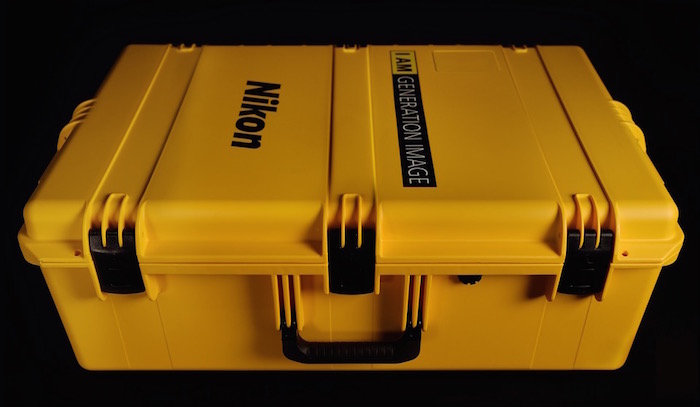 How the D810 FIlmmaker’s Kit should have shipped.

What Nikon should have done is to ship this kit out in a Pelican case (or some other hard shell case) that makes it practical to reuse. I love the presentation of the Nikon gear in the case that shipped to participants of Nikon’s new I AM Generation Image marketing campaign. That’s exactly how Nikon should have packaged the D810 Filmmaker’s Kit. 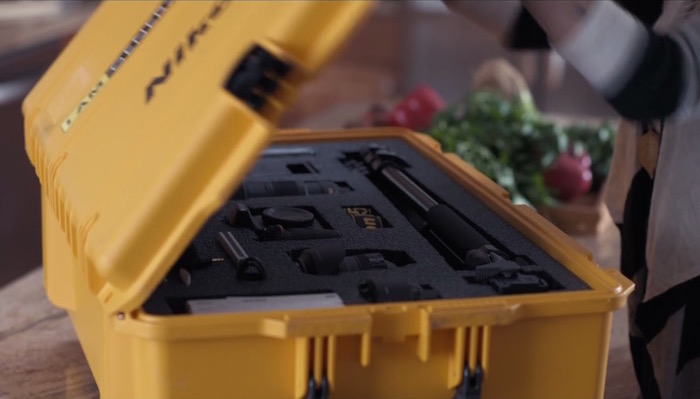 Having used each of the lenses and accessories in conjunction with the D810, they all have their place if you are using the D810 as a double duty camera. The 35mm, 50mm and 85mm lenses are fantastic for still photography. When shooting video, however, they have their limitations.

The biggest problem you will encounter with these lenses (and nearly all stills lenses) in video work is the short throw of the focus ring. When you are trying to fine tune manual focus on your subject with lenses created for still imagery – and in particular, these lenses – you need a longer throw on your focus ring. I was continually frustrated by the short throw of the 35mm lens especially when zoomed in on the live view as I tried to nail focus on a static subject. If you are shooting a moving subject, you can forget about it with these lenses.

However, if you are going to rely on autofocus for the most part with still imagery and you are going to be working with static subjects (say in an interview environment), then these lenses will be serviceable for the video portions of your work. 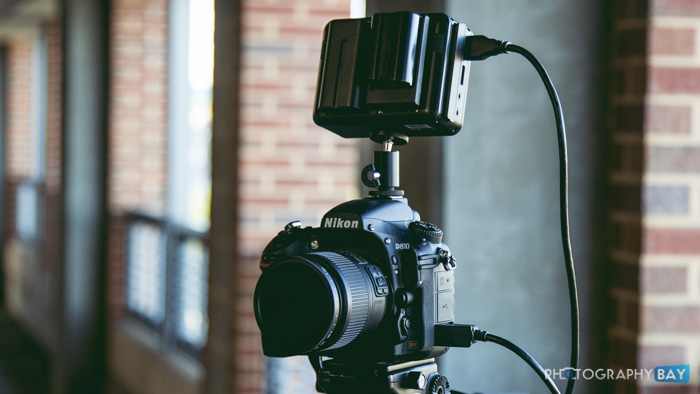 The Atomos Ninja 2 is a fantastic device that really helps pull the best possible quality out of the D810’s video recording. If you are not familiar with what the Ninja 2 does, it is an external recorder that records captures much higher quality video from the Nikon D810’s HDMI port.

The Atomos Ninja 2 captures 4:2:2 10-bit video with ProRes or DNxHD encoding to a 2.5″ hard drive that you insert in a dedicated drive sled, which then plugs into the unit. I plugged in a spare Hitachi spinning hard drive that I had laying around and was up and running in a few minutes. The Ninja 2 supports WD, Hitachi Samsung and Toshiba hard drives, as well as Intel, OCZ and Cruise SSD drives.

This type of storage is cheap compared to memory cards. You can find a 500GB HGST (formerly Hitachi) drive for the Ninja 2 for a little over $50 now.

The Ninja 2 doubles as an external display and offers touch screen controls for digging into the menu settings, beginning and ending recording or reviewing files. It also offers pass-through HDMI so that you can send the D810’s HDMI signal onto another monitor if needed. 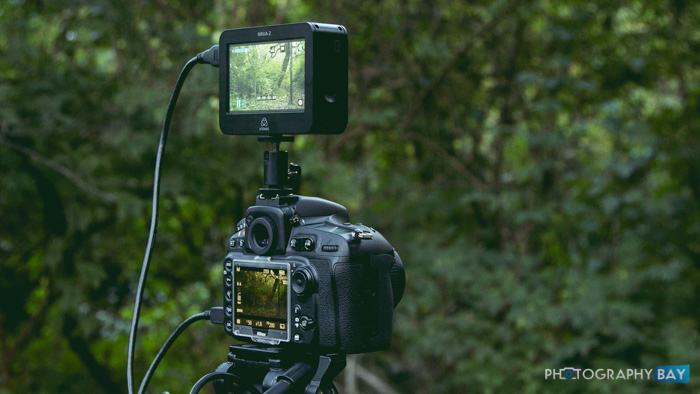 While the Ninja 2 feels and functions like a solid product through and through, the one complaint that I have about the unit is that some of the accessories (e.g., the drive caddies and battery adapters) feel like cheap plastic Chinese products. Everything functions perfectly fine; however, I feel like the build quality just isn’t up to snuff on some of these accessories.

That said, I think the Ninja 2 is well worth its retail price of $700 and is probably the easiest part of the D810 Filmmaker’s Kit to convince me should be included.

The Tiffen variable ND filters are solid filters. There is little color shift when using these filters compared to some other variable ND filters on the market. I definitely recommend having one of these in the kit; however, I would opt for a step-up adapter and a larger filter rather than a pair of vari-ND filters. I actually would probably go with a Tiffen 77mm Variable ND filter and a full step-up ring kit to ensure compatibility with most lenses in most kits. 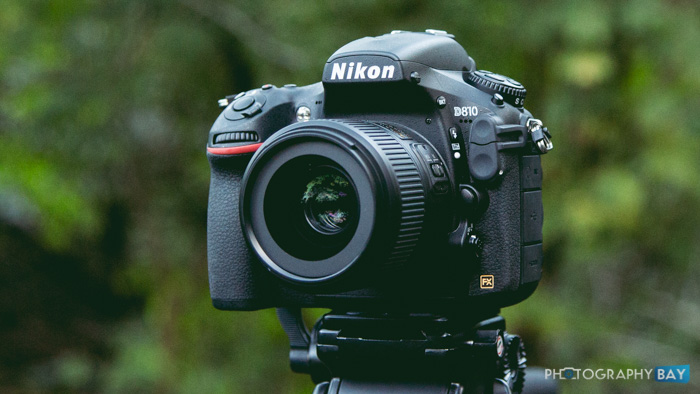 From a still image shooting perspective, the D810 is a no-brainer for every Nikon shooter out there if you have the budget to swing it. It is the best DSLR Nikon has ever made.

Autofocus is top notch and image quality is ridiculously great. I would shoot ISO 12,800 with no hesitation in almost any situation. And, frequently, I find the ISO 25,600 is plenty acceptable. Above that though, chroma noise really starts to get out of hand.

While the D810 is somewhat of a mild upgrade to the Nikon D800, there are still several features to get excited about in the D810. For the breakdown of what’s new and exciting in the D810, I am going to direct you to the following video from the guys at The Camera Store TV. In the video, they break down 10 changes from the D800 and D810.

One of the bigger new video features for the D810 is the ability to record full 1080p video at 60 frames per second. For some reason, Nikon and Canon are a little behind the curve with this commonplace specification (don’t get me started on 4K), but Nikon touts the inclusion of the EXPEED 4 image processor what allows the D810 to make the frame rate bump. 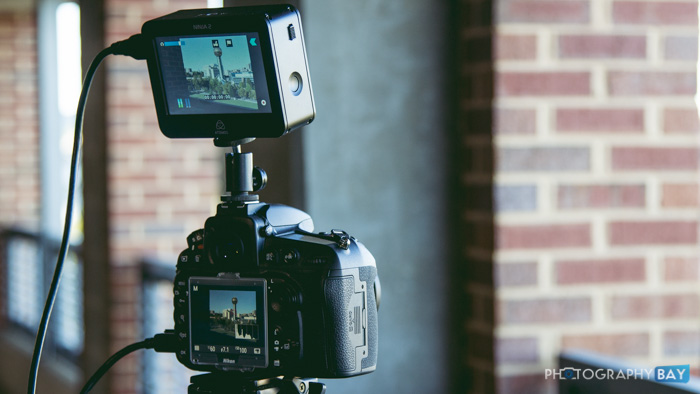 The included Ninja 2 makes a ton of difference in image quality and flexibility in post production. The D810 records internally a heavily compressed H.264 format and 4:2:0 color space. As a result, the final image you get out of the D810 is pretty much baked in. Sure, you can tweak a push things a little bit, but you are limited in how much color correction and grading you can do in post production.

The 4:2:2 ProRes files captured by the Ninja 2 via the HDMI output of the D810 provides a night and day difference to what you can do with it in post production. Take a look at the below sample frame grabs from two video files.

I applied several effects in Premiere Pro stacked on top of each other.

The first was recorded on the D810 internally to a CF card. 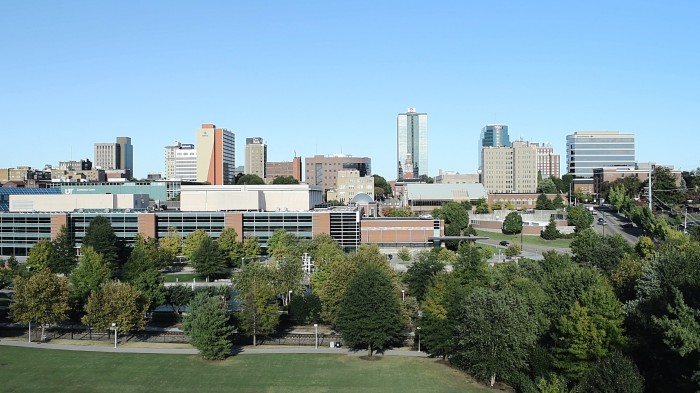 The next image is a frame from a ProRes file with the same effects applied as the above CF card frame grab. 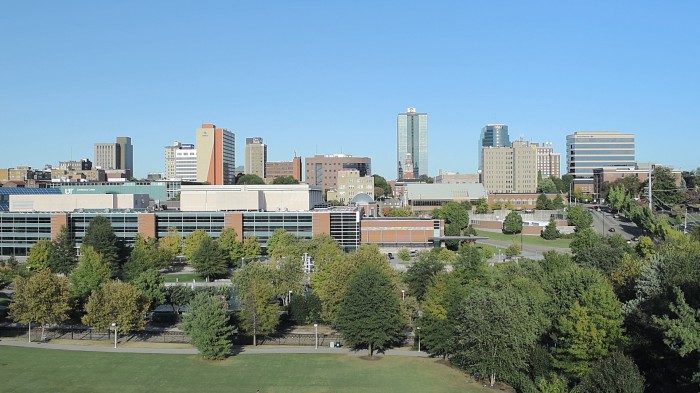 Look a the differences in the shadows, highlights and overall color information. 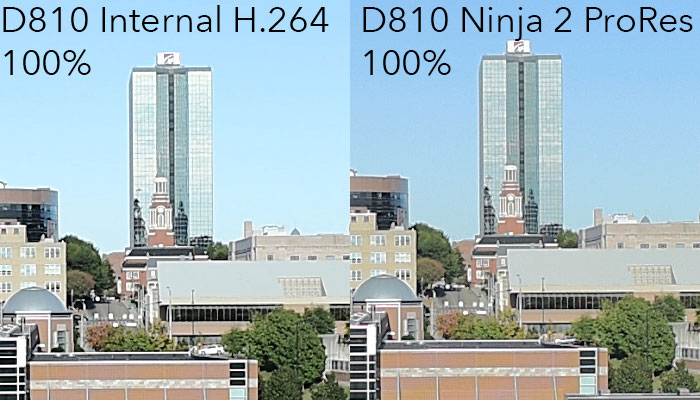 Of course, the price you pay for using the Ninja 2 and its ProRes codec is file size. The above two files are each close to 50 seconds long. The internal H.264 file is about 135MB, while the ProRes 422 file is 1.09GB. If you are going to shoot with the D810 and Ninja 2 combo, then you need to invest in about 10x more storage than you do for the video captured to the internal CF cards.

The Nikon D810 is a great camera. It is so, so good. Stills and video are solid. And on the video side, the included Ninja 2 recorder gets the most out of the camera. Aside from a few personal complaints regarding the controls of the Nikon D810, which is probably only because I am a Canon shooter, I have no real gripes with the D810. I highly recommend the D810 camera and the Ninja 2 recorder all day long. 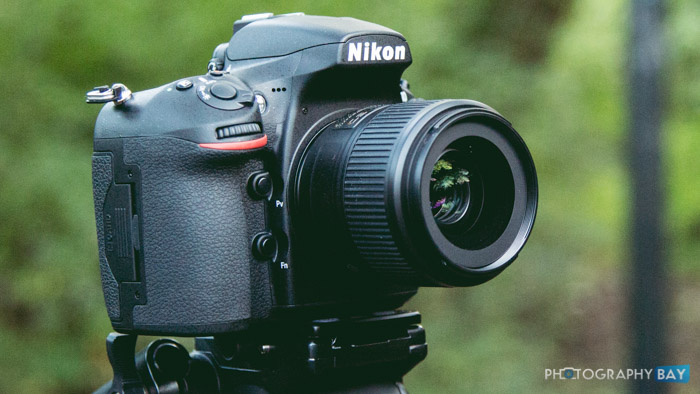 As a pure filmmaker’s kit though, I think Nikon’s big bundle here misses the mark and I can’t really recommend the sum of the parts as much as certain pieces of the kit. While you are going to save money purchasing the filmmaker’s kit compared to each of the items individually, it’s not a kit that many would ever put together.

I think there is room for this kit for certain individuals who shoot both stills and video; however, even then, I think a better kit could be assembled for the individual shooter. The Achilles heel of the kit is the inclusion of still photo lenses instead of true cinema lenses. The focus throw on these lenses is just too short for most video shooters’ needs. Nikon should have either (1) developed its own Nikon cinema lenses, which would have been much more expensive, or (2) partnered with a cinema lens manufacturer for this kit.

As it stands, the Nikon D810 Filmmaker’s Kit comes across as more marketing showmanship than true value for the video shooter. Individual components alone excel in their regard, but the overall kit comes up short.

The Nikon D810 Filmmaker’s Kit and individual components of the kit are available from Photography Bay’s trusted retail partner, B&H Photo, at the following links:

By making your photography and video purchases at B&H Photo through these links, you are helping Photography Bay to continue bring quality camera tests, news and reviews. Thanks for your continued support.