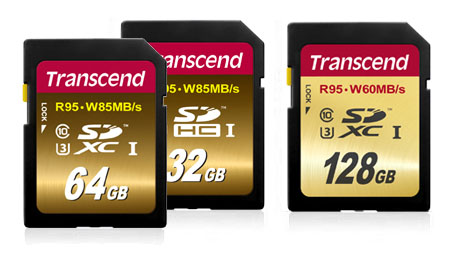 The Transcend Ultimate 64GB UHS-I SDXC Speed Class 3 85MB/s write speed card is one of the better “fast” cards available today. Note the W85MB/s speed rating. That refers to the data write speed, which is what matters when using it in your camera.

The UHS-I designation means that it uses the new Ultra High Speed bus, type I, which is compatible with newer DSLRs, mirrorless and video cameras. The U-3 rating is a Speed Class 3 rating, which means it is capable of a minimum write speed of 30MB/s – an important spec for 4K video capture on cameras like the GH4 and some of the newer camcorders that shoot 4K and support UHS-I Speed Class 3 SD cards.

I tested this card with Transcend’s other 64GB SDXC U3 card (rated at 60MB/s write speed) in the new Nikon D5500. This card performed noticeably better. Shooting RAW + JPEG, it delivered 5fps for 5 frames, then dropped off to 1.75fps. Using the Transcend 60MB/s card, I got 4.8fps for 5 frames, then it choked up to 2 frames at 0.75fps and then continued to chug along at 1.5fps.

Finally, testing true read and write speeds, this card delivered 65MB/s write speed and 87MB/s read speed through the card reader in my iMac. Those are admirable sustained speeds for an SDXC card.

While the card is rated as 95MB/s read speed and 85MB/s write speed, those are the maximum speeds for this card. Sustained speeds are always going to be lower. But, as noted above, this card delivers some solid performance.

You can see the full set of data comparing this Transcend SDXC card to other cards in my Nikon D5500 memory card speed test.

The Transcend 60MB/s card is clearly good enough for 4K video capture on the GH4 and other 4K cameras using SD cards. It is also about half the price and available here at B&H Photo.