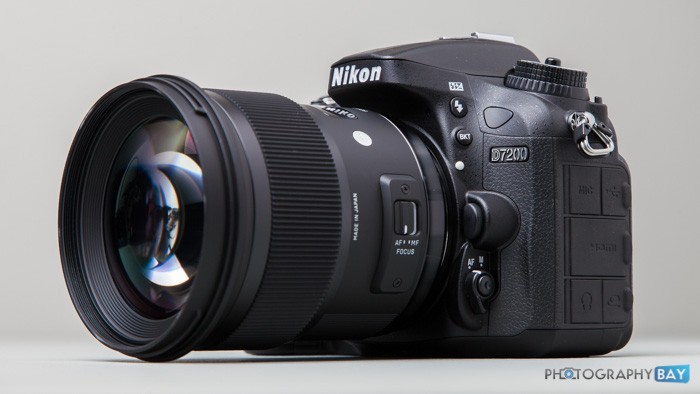 The Nikon D7200 is the current king of the DX-format hill. It serves as an update to the D7100, which was a great camera. In short, you’ve got more of the same here with the D7200.

The D7200 keeps a good thing going with a 24.2MP APS-C format sensor and full HD video capture at up to 1080/60p (using a 1.3x crop). Like the Nikon D7100, the D7200 does not have an optical low-pass filter, which aids in producing higher resolution images but objectively risks the addition of moiré into images. 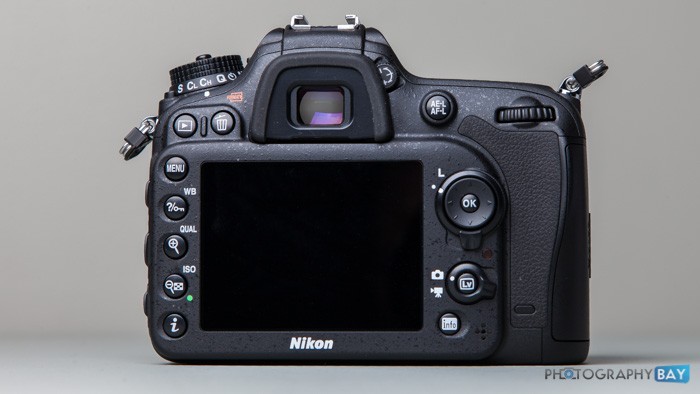 The biggest improvement that is noticeable on the D7200 is the increased buffer size thanks to the EXPEED 4 image processor (compared to the EXPEED 3 on the D7100). Additionally, the D7200 adds built-in WiFi, which required a separate $40 adapter that you plugged into the side of the D7100. The D7200 also adds a time-lapse movie mode, a full-size HDMI port and a larger and improved top-LCD.

Shooting with the Nikon D7200 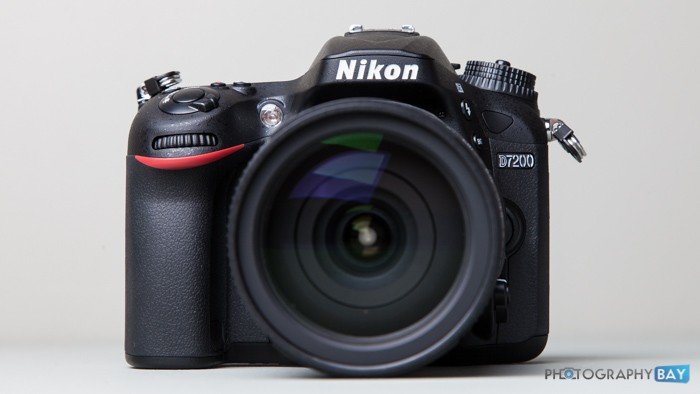 As you can probably see, the D7200 is more of an evolution of the product line, as opposed to a major update from the D7100. This sense carries over into shooting with the D7200. There just isn’t a whole to change on an already-fantastic camera. 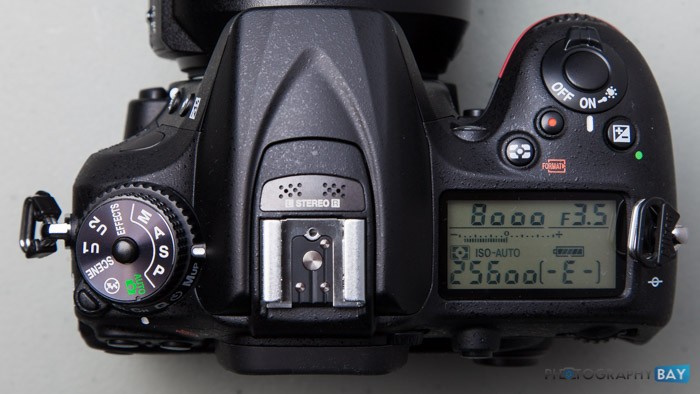 Nikon makes a great camera body and the D7200 external controls are thoughtfully laid out and abundant on the camera. Because the camera has a built-in focus motor, that means you can use it will all Nikon F-mount AF lenses and get full AF. This is one big reason to consider the D7200 as a step-up from the D5500 and lower-end models. There are tons of great, older Nikkor lenses available at reasonable prices on the second-hand market – and some solid, affordable lenses that are still available at retail. 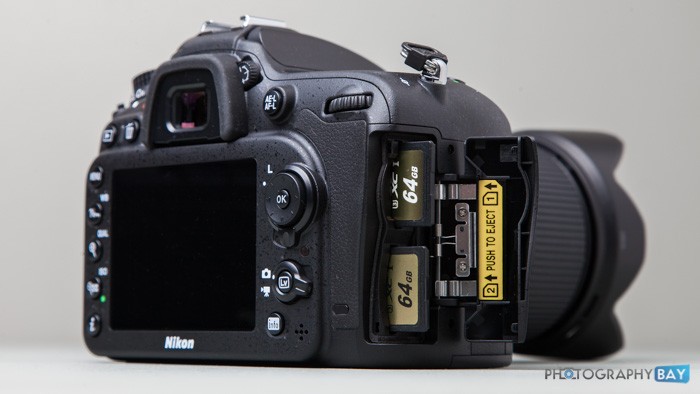 Since the D7200 has an improved buffer over the D7100, the memory cards you insert in your camera are going to make a difference in both frame rate and buffer performance. In my tests, file sizes average at roughly 26MB for .NEF raw file and about 13MB for .JPG files.

The best I saw before a frame rate slowdown when shooting .NEF raw images was 19 frames, while I managed to capture nearly a full speed burst of 75 frames of large .JPG files before experiencing a buffer slowdown. For the money, the Transcend 64GB UHS-I Speed Class 3 card (with the 85MB/s write speed label) is one of the best cards you can get now for UHS-I devices like the D7200.

Autofocus was fantastic with the D7200. For a mid-range DSLR, the D7200 performed as good or better than any competitor I’ve used. Even in low light situations, the D7200’s 51 AF points can lock onto most subjects.

As noted above, WiFi is a new built-in feature for the D7200. I found it acceptable to use but still a bit clunky. I did find myself using it more than other cameras I’ve reviewed recently. It was pretty easy to connect and transfer images to my phone. However, the WiFi range was quite limited. I noticed an extreme slowdown in transfer speed (or failure altogether) if I put the D7200 in my camera bag and allowed it to swing down by my hip.

We still have some work to do before WiFi connectivity becomes a smooth and friendly process. It works well enough to get some photos on Instagram or Facebook now but it is not a bed of roses. Kudos for including the feature, but keep working on it Nikon. 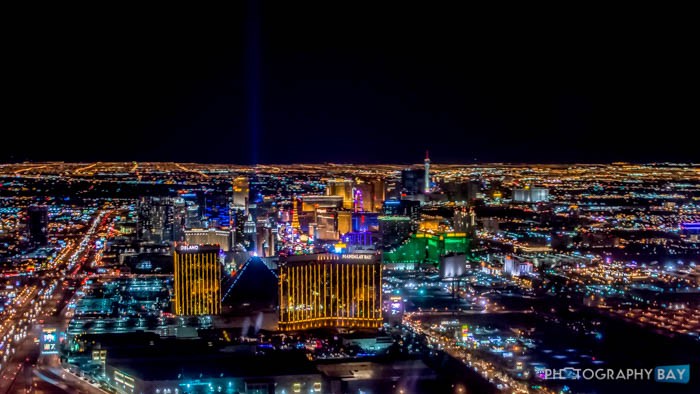 The image quality is superb and the low light performance just keeps getting better. One thing that I think this leads to is that all-purpose lenses have, in fact, actually become lenses we can use in just about every situation. 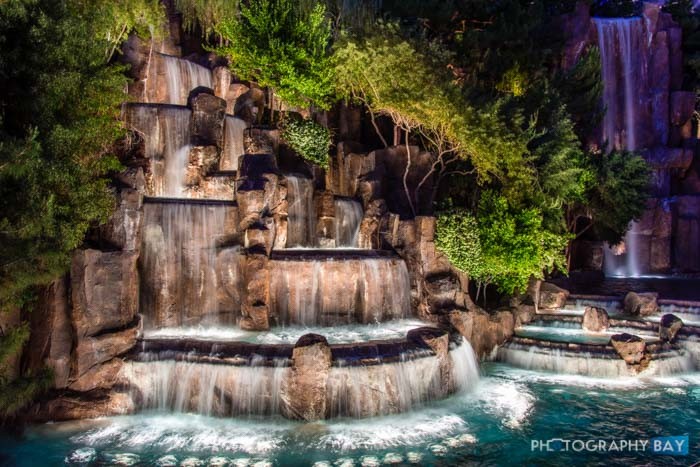 I used the excellent Tamron 16-300mm f/3.5-6.3 Di II VC PZD Macro lens quite a bit on the Nikon D7200. It offers an incredible range of 24-450mm equivalent zoom on DX format sensors, as is found in the Nikon D7200. Just a few years ago, the insane noise you would get shooting in lower light levels with such a slow lens (especially at the long end) would have been unacceptable – that is, if you could focus.

Now, the D7200’s autofocus and high ISO quality is so good, you don’t have to take the superzoom lens off when you go indoors or when the light dips below full daylight. You can keep shooting and easily live with the higher ISO settings on the D7200. It’s okay if you shoot a snapshot indoors using a smaller aperture and higher ISO setting. 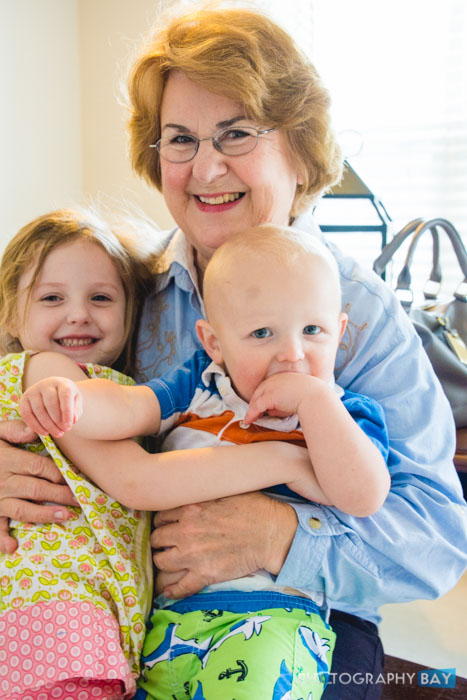 Advances in the D7200’s tech simply makes some of these slower superzoom lenses more user-friendly and less frustrating for new users to operate.

Speaking of the Tamron 16-300mm lens, check out this incredible zoom range with it on the D7200. 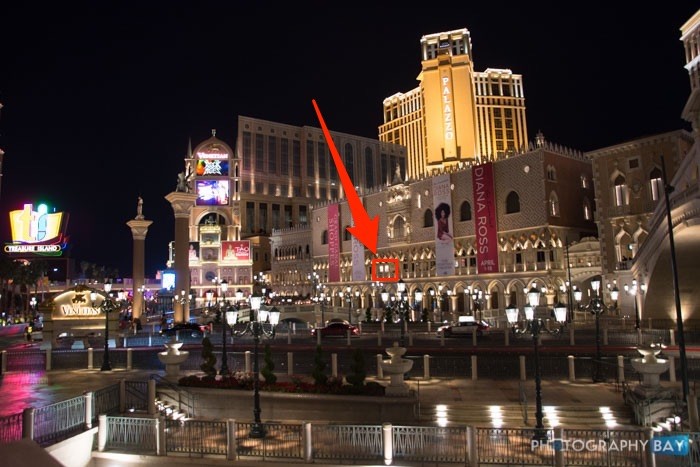 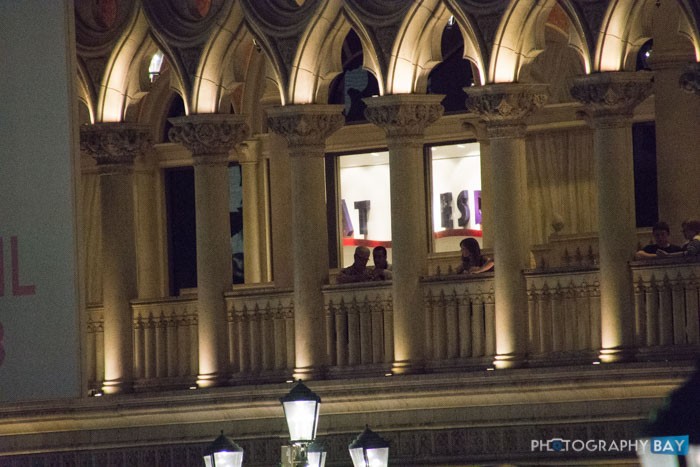 I really enjoyed shooting with this superzoom lens thanks to the solid high ISO performance on the D7200. 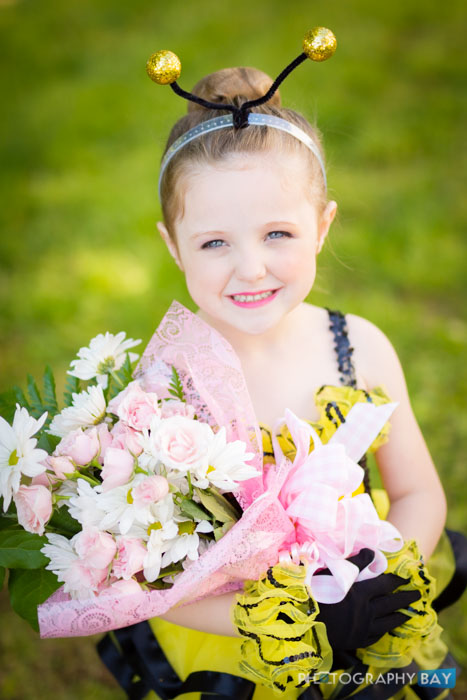 Of course, outside of the extreme ISO samples, the D7200’s image quality performance is excellent. Shooting it with the new Sigma 50mm f/1.4 DG HSM Art lens is just a blast. (See above photo.) Again, AF performance and image quality is outstanding with this lens.

Here’s the before and after of the above image from Lightroom. 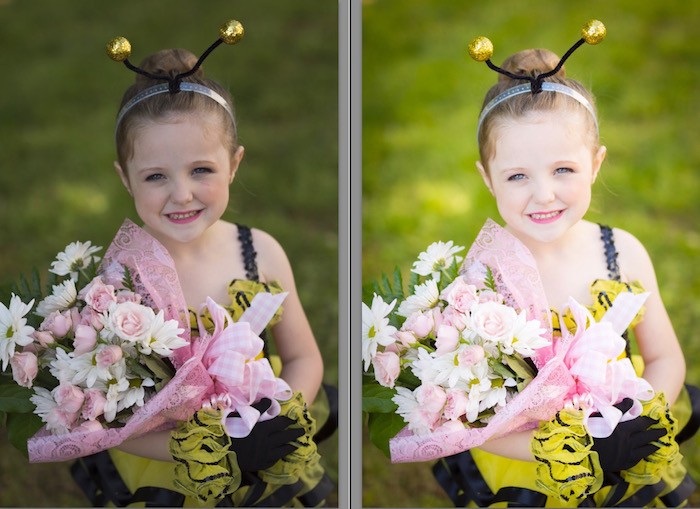 And here’s a 100% close-up of her eye after a significant bump in exposure in Lightroom. 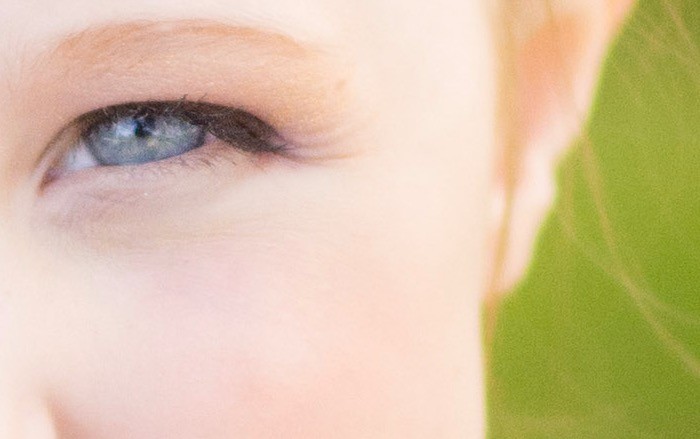 We have seen a built-in HDR mode in many cameras lately. The D7200 offers this as well. In some instances it works quite well by combining multiple exposures for a single high dynamic range image. 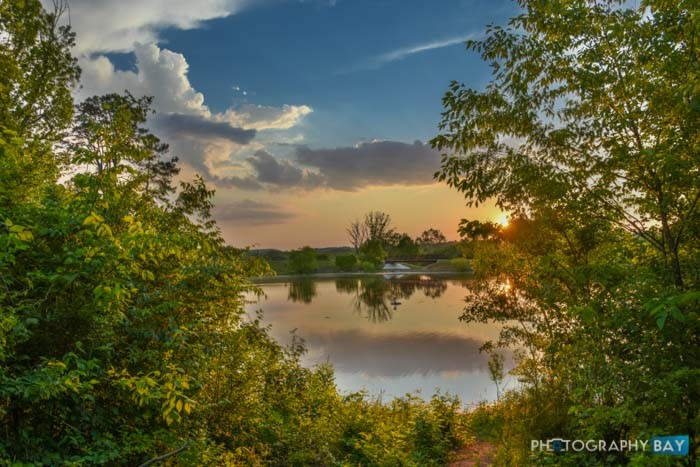 Where it doesn’t work well, however, is when it comes to ghosting across the exposures. Take the above image for example. The camera did a pretty good job of blending the exposures for a balanced reproduction of highlights and shadows. It would have work pretty well but a closer inspection reveals significant ghosting in the leaves. See below. 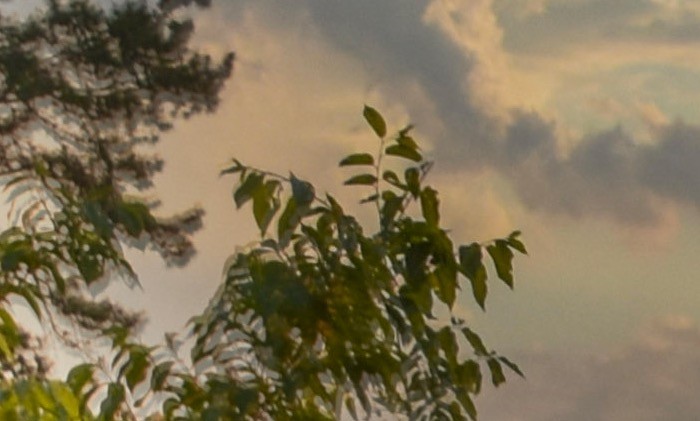 When it comes to shooting HDR images, I still prefer to shoot separate RAW files and process them after the fact. I printed this shot as a 13″ x 19″ print on the Epson P600 and it looks fantastic. 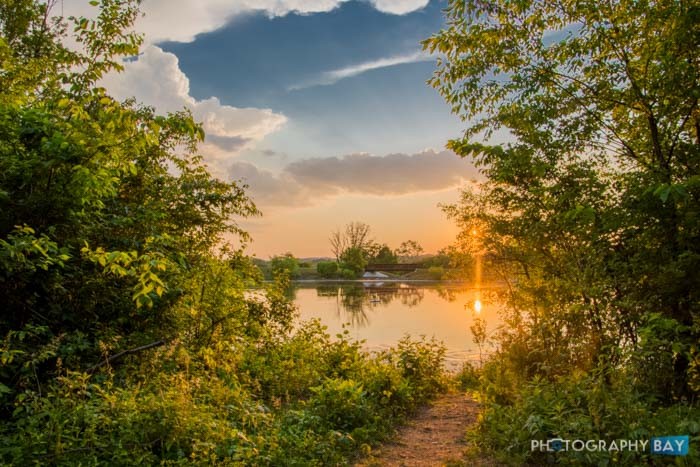 While it’s not perfect, it’s hard to notice the presence of ghosting in this shot at normal viewing distance taken from three images and processed in Lightroom. When you look closer, however, there is some obvious chromatic aberration and some strange artifacts leftover from the software’s deghosting efforts. The chromatic aberration is intensified by combining the images as a single HDR. This is somewhat correctable in post.

The odd ghosting artifacts can be seen below. I believe these are the result of the amount of motion in the shot and the software’s inability to distinguish the actual solid objects. 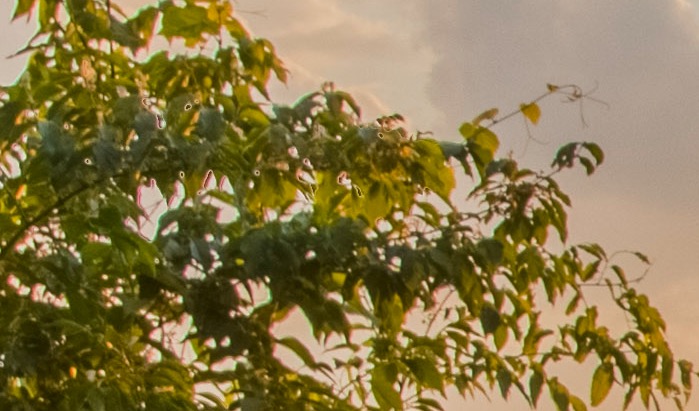 There was a decent breeze the day I took these shots, so I’m going to have a tough time removing all of the artifacts. However, it’s pretty clear to me that you should stick with manually processing your HDR images because the internal processing the D7200 is not up to snuff when dealing with ghosting.

For a still life subject that you consider a snapshot, the internal HDR is probably good enough. It’s probably a worthwhile feature to have in the camera – especially for new users. For anything you take seriously though or if you are dealing with any motion in your shot that you want the ability to remove, I would still recommend bracketing RAW images.

As a Canon shooter, I really like what Canon did with the recent 7D Mark II; however, I have to give the edge to Nikon in overall image quality for the APS-C format line and the highest regards to the Nikon D7200. 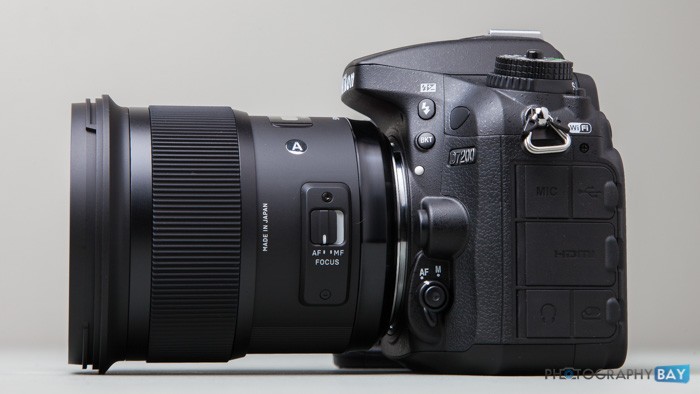 The D7200 captures more than acceptable quality video. The fact that you have clean HDMI output with a full size HDMI port is a bonus. Of course, you’ll still need adapter cables for many of the external recorders that use mini and micro HDMI ports. It also offers both mic and headphone ports, which is great to have on a camera in this price/feature range.

Full time autofocus is still pretty painful on the D7200. If you want a camera that has good autofocus for video, I still recommend staying away from Nikon DSLRs. Nikon just doesn’t have it down yet. There is still enough pumping and hunting for the camera’s functions to be distracting from the video content. That isn’t the case with the Canon Rebel T6s/T6i, 70D or 7D Mark II.

One more achilles heel for the D7200’s video capability is the inability to change aperture in video mode. This is a critical feature that we have been complaining about for several generations in Nikon DSLRs but the D7200 still won’t let you change the aperture when live viewing the image in video mode. This makes the camera so much more frustrating to use as a video camera.

While the image quality when shooting video is solid, there are just too many annoyances to consider this an attractive feature of the camera – especially when you consider what the competition offers. 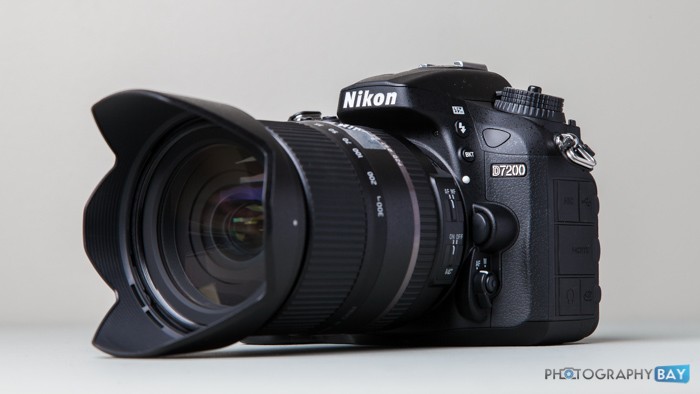 Transcend 64GB UHS-I Speed Class 3 card – I already mentioned this above. There are probably other cards that perform as good as this card. Based on what I tested though, you’ll get the most out of your D7200 using this card. Because of the large file sizes produced by the D7200, I recommend picking up the 64GB card.

Nikon EN-EL15 Battery – The Nikon D7200 comes with one of these rechargeable lithium-ion batteries; however, if you’re going to be away from power for an extended period, you can pick up spares.

Nikon MB-D15 Battery Grip -If you are looking for more power or just more control in the portrait orientation, the MB-D15 is the grip to fit the Nikon D7200.  It comes with two battery trays – one for the EN-EL15 and one for 6 AA batteries.  Just make sure you grab an extra EN-EL15 battery to go with MB-D15 as it does not include the battery itself.

Nikon SB-700 Speedlight -The SB-700 is hot shoe Speedlight and it currently occupies the “enthusiast” segment for Nikon Speedlights.  Since the D7200 can be operated in commander mode with the built-in pop-up flash, adding a SB-700 Speedlight is a great tool to get the flash off the camera.

Tamron 16-300mm f/3.5-6.3 Di II VC PZD Macro lens – A great all-in-one lens that gives you an incredible range from wide to telephoto. As I mentioned above, its use is greatly expanded thanks to the solid low light performance of the D7200, which allows you to use this lens at a much slower aperture in situations where you may have previously balked at the idea. A great fit for the D7200. 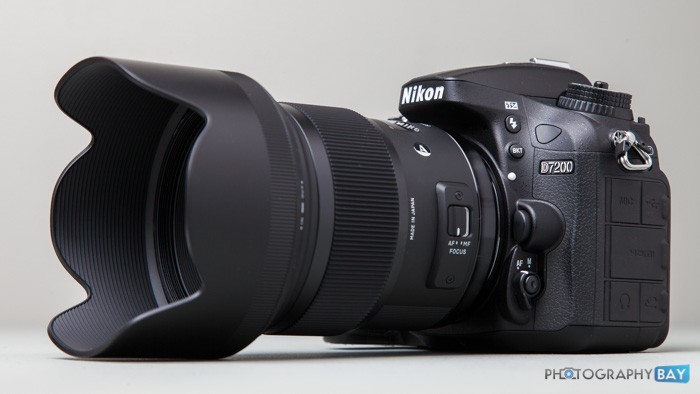 In case you somehow missed it (or if you skipped ahead), the Nikon D7200 is an excellent camera. It produces still images that compete with or are better than any other APS-C camera on the market. The low light performance of this camera is top notch and rivals cameras that cost quite a bit more. If video is your thing, look toward competing models from Canon or Sony. At the very least, be prepared to deal with some of the inexplicable nuances of the D7200’s video mode.

Overall, the D7200 is easy to give a high recommendation. It offers plenty of performance that will be hard to outgrow.