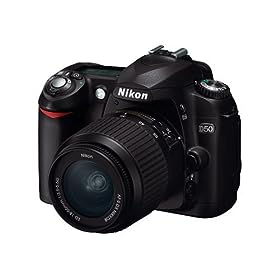 The nicest thing about the D50 however is that it just feels right, build wise it’s a step above the Canon EOS 350D and Pentax *ist DS, it’s also not too small, I’m all for making cameras lighter but there’s a limit as to how small you can make an SLR before the hand grip feels cramped and controls begin to get in the way. The D50 feels as responsive as any film camera and is a pleasure to shoot with. The only change I would make would probably be a larger viewfinder view (like that of the Pentax *ist DS).

Back in 2006, the Nikon D50 was a great camera for basic photographers, non-photographers or backup. Image quality is identical to the D70 and D70s, which means brilliant 12 x 18″ prints that many people confuse with prints from a medium format film camera.

Camera performance is superb: just flip the power switch and the D50 is ready to go. The camera focuses quickly and takes pictures without any noticeable shutter lag. Autofocus speeds were impressive, even in low light. While battery life isn’t as good as the D70s, it’s still excellent (and you can buy a higher capacity battery if you need to). Transferring photos is actually faster on the “cheap model” because it supports USB 2.0 High Speed, unlike the D70s.

If you are serious about expanding your hobby though but are in doubt about which one to go for, take a good look at which functions you would really need, as the differences between the D50 and D70s are fairly minimal. The D50 may be lighter and more compact but some more advanced functions are less accessible. The D70s is definitely more bulky but feels more professional, while offering instant access to functions like metering or bracketing. It has white balance and ISO fine-tuning, a top shutter speed of 1/8000, DOF preview and the option for wireless flash control. If you feel that you would never use these functions anyway, go for the D50 and you will live happily ever after.

The D50’s image quality was excellent. Its exposure and autofocus system complemented each other, producing sharp, well-exposed images. The 5-point AF system is fast and accurate, and its predictive focus tracking is able to keep up with moving subjects. Image noise was not an issue with the D50. At ISO 200 and 400 noise was essentially absent. Shadow noise is detectable in images captured at ISO 800, and noticeable at ISO 1600, but highlight noise is remarkably low even at ISO 1600.

The drawbacks are all minor compared to the pluses. The D50 takes beautiful photos when used well, and can give almost any low-cost digital SLR on the market a run for the money in image quality. In short, expect to produce darn good results out of this camera.

The latest result of this process is the new Nikon D50 digital SLR, delivering most of the features that made the D70 such an exceptional product, but at a lower price point and with the camera’s size and user interface retooled somewhat to better match the needs of the “family photographer.” – Or anyone else who wants a feature-rich, easy-to-use, compact (but not too much so) digital SLR for a bargain price. What was most surprising to me about the D50 though, was that its image sensor and some aspects of its image quality (notably noise levels) are actually superior to those of the higher-priced D70S.

All in all the Nikon D50 is an excellent digital SLR camera. Ideal for those who have outgrown their compact camera or for those who want to take their first steps into digital photography. The Nikon D50 may be a so-called entry level model; nevertheless it offers the user almost everything.

This is a great little camera and a fine choice for a new photographer. It has a very agreeable personality that makes photography a pleasure. More advanced photographers might want to step up to the Nikon D70s for some of the additional features and greater media compatibility that camera offers, but many might be satisfied with the Nikon D50.

First off, consider going to your local camera store (and I don’t necessarily mean Wolf Camera at the mall). By going to your local camera store, you’re supporting your community and you just might build a lasting relationship with people you can rely on when you need some help or answers. If you’re buying online, I recommend sticking with Amazon, B&H Photo or Adorama. These three vendors are reliable, trustworthy and generally have the best (legitimate) prices. Additionally, purchasing your camera through these links helps support this site.
[tags]nikon, d50, review, dslr, digital, camera[/tags]