You’re a photographer, you hate seeing the same or similar photos over and over again even more than others do. That said, you also need to keep in mind that your photos need to stand out. Making them do that isn’t hard to do as long as you remove personal boundaries and think outside of the box.  To start, the elements of photojournalism (the unusual, the newsworthy, the emotional and the intimate) may really help aid you in the your street photography. Here are some tips to help you do so. 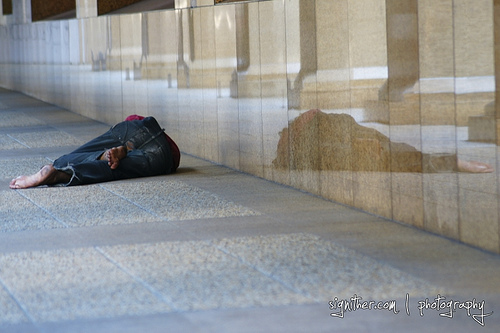 When people look at your photos, they want to see different angles instead of what we may usually see from our height level. That being said, why not do a “Hail Mary” shot by raising the camera above your head and firing a shot without looking through the viewfinder. If it helps, you can use your Live View screen to aid in composition. Similarly, do what Signither did above and get down nice and low to get a different perspective.

Look For the Familiar, But Different The best way that this can be explained is through photos. You know that famous photo of a marine kissing a nurse in Times Square? This one. That’s been mimicked and duplicated time and time again. The reason why is because it’s an iconic shot of the times and of the century once you know the story behind it. You can look for things like that all over the streets.

Dressed as little Red Riding Hood during the Halloween parade, this beauty in the photo above had to hold her skirt down as the wind was blowing it up. That made it look like the famous photo of Marilyn Monroe. The light on her mid section is another man’s red beam from his camera. This image was snapped as soon as his beam fired.

I love this image because it’s so candid and shows us what really happens sometimes on the streets. Street photography and photojournalism requires you to not disturb your subject so that everything happens as is. You’re supposed to be an observer, not a participant. You can possibly do this by shooting with a rangefinder, micro four thirds camera or premium compact.

If you’ve got a strong presence the way I do, you may want to not use something like a 50mm lens. That isn’t to say they’re not useful. I still use my 50mm, but I use it in different situations like the one above where I was able to step off to the side and not get in the way of anyone. If you disturb your subject, you may ruin your chance of getting a shot that no one else has.

Otherwise, try using a telephoto zoom of some sort with a nice wide aperture.

For Speed, Shoot in Aperture Priority You’re taught as a street photographer to disarm angry people with just your smile. While you really should do this, there are sometimes where you need to take the shot and keep moving, such as with crowds of people moving in a stream to get out of Penn Station.

In that case, shoot in aperture mode because of the fact that you don’t have a lot of time to sit there and manually focus and adjust your shutter speed and f stop. To be fair, if you’ve mastered your camera then go ahead and do that. For everyone else, Aperture Priority will ensure that your subjects are separated from your background and foreground.

A split second is all it takes to get that moment.

Use the Hyperfocal Distance

For those of you that don’t know what this is, here is a detailed explanation of the concept. In a nutshell it is  simply a fancy term that means the distance setting at any aperture that produces the  greatest depth of field. On the focusing mechanism of your lens, it will tell you how far away you are focusing. You should be able to use that combined with your aperture of get your subjects in focus. This works best with a prime lens and is possibly the most used method of shooting with one. Basically, the smaller your aperture, the greater your hyperfocal distance can be considering your focusing.

This can allow you to keep your distance or fire from the camera without looking into the viewfinder so you don’t alarm anyone.

As an extra pointer your sensor size may also factor into it as smaller sensors have greater depth of fields (also known as less shallow depth of field.) In this case, a Micro Four Thirds camera, Canon S90 or even the Leica X1 may be good for this application. For those of us that prefer viewfinders, an entry level DSLR will suit you just fine.

What tips can you add?