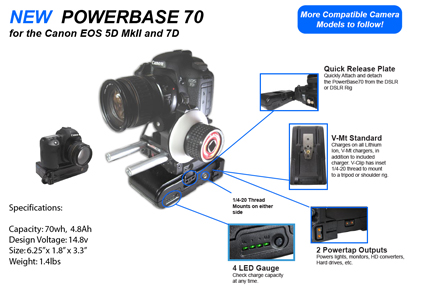 Switronix, maker of a variety of video accessories for HDDSLRs, has introduced the Powerbase 70, which will be on display at NAB 2010.  The Powerbase 70 is a dedicated accessory for the Canon 5D Mark II and 7D and provides up to 6x runtime thanks to its 14.8v battery pack.

Rockville Centre – NY: Switronix Inc has just released their newest addition to their DSLR power solutions. Preparing to solve the need for HDSLR higher power Switronix introduces The PowerBase 70. On Display at this years NAB show, The PowerBase 70 is a 70wh 14.8v Lithium Ion Battery pack providing up to 6x the runtime of OEM batteries for the Canon 5D MkII and 7D. The PowerBase 70 mounts under the camera doubling as a grip or attach to a HDSLR support via its 1/4-20 release plate or V-mount.

Wired as a 14.8v battery pack it can provide extended power to up to two additional 12vdc devices, as well as other devices requiring lower voltage through an additional XP power regulation cable. The pack is also furnished with a 1/4-20 on either side to mount accessories.

Switronix has confirmed that More Compatible Camera Models are to follow. See it on Display with Switronix at the Zacuto Booth at NAB #C5041

For more information on this and other DLSR products, Visit: www.switronix.com