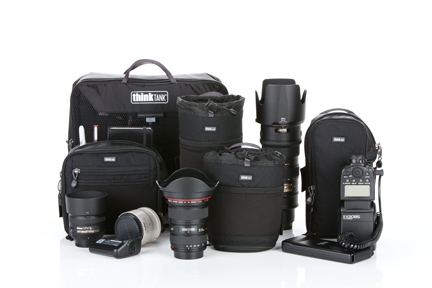 The new versions of these modular systems feature a number of improvements, several of which are highlighted in the overview video above with Think Tank Photo Co-Founder Deanne Fitzmaurice.

An excerpt of the press release notes the following improvements to the system:

The new Modular Component Set V2.0 includes the Lens Changer 50 V2.0, LC 75 Pop Down V2.0, Strobe Stuff, Speed Changer V2.0. All can be transported in the breathable Large Travel Pouch. All of the elements can be carried as a set or as individual items on Think Tank Photo’s Pro Speed Belt V2.0, Steroid Speed Belt V2.0, or Skin Belt V2.0. The new Keep It Up™ Shoulder Strap provides vertical support to any Think Tank Photo belt and includes a memory card holder.

The Lens Cases’ new features are:

The Gear Pouches include the same new features as the Lens Cases, as well as:

Both the Lens Cases and Gear Pouches come with Think Tank Photo’s unique Rotate and Lock design feature so that components slide along the belt or fasten in a specific position on the belt.