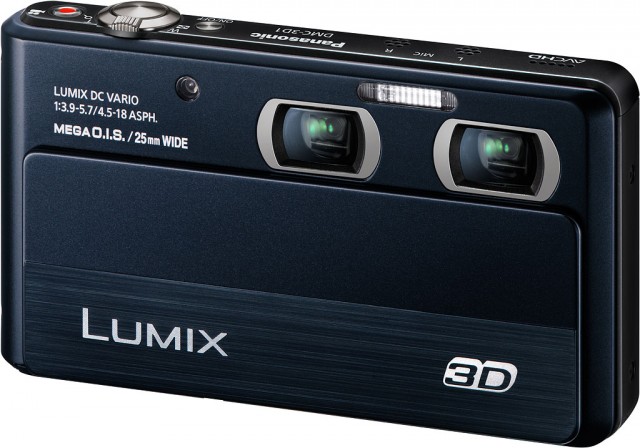 The 3D1 should be available in December 2011 at an initial retail price of $499.99. Check availability on Amazon.com.

or to Shoot Video and Still Photos Simultaneously

Featuring a unique shooting option, the new twin-lens system allows the LUMIX 3D1 to capture 2D images and video simultaneously. The LUMIX 3D1 can shoot 12-megapixel 2D photos and record 1920x1080i full HD 2D videos.  In conventional standard digital compact cameras, users must shoot in either photo or video mode and when photo mode is selected, video recording is interrupted.  The twin-lens design of the LUMIX 3D1 breaks through these conventional barriers with two separate mechanisms for image capturing, allowing for dual shooting capabilities.  Additionally, the two-lens design allows users to record photo or video in different angles of view simultaneously.  For example, users can record an entire party scene with one lens while zooming in on and capturing the photo of a specific person with another lens. Users can easily switch between 2D and 3D mode with the dedicated 2D/3D switch conveniently located on the back of the camera.

“Panasonic continues to lead the industry in 3D entertainment, giving consumers the opportunity to create their own content and then view it within their homes, and the new LUMIX 3D1 is an innovative digital camera that excels with its 3D imaging technologies, but also offers outstanding 2D photo capture options,” said Darin Pepple, Senior Product Manager, Imaging, Panasonic Consumer Electronics Company. “With its twin-lens design, the LUMIX 3D1 can even shoot HD video through one lens and 2D photos from the other – thus getting still and moving content simultaneously, a unique shooting feature which Panasonic provides so users can stretch their creativity.”

The 12-megapixel High Sensitivity MOS sensor and the Venus Engine allow the LUMIX 3D1 to achieve high-quality images and easily process image sensitivity and speed. Multi-process Noise Reduction applies optimal noise reduction according to the brightness of different areas of an image, thus creating crisp and beautiful photos and videos. Both high frequency noise that occurs in the dark area, and low frequency noise in the light are of a photo are suppressed even though occurring simultaneously in a photo. As a result, images recorded in low-light situations are dramatically clear, even when recorded at a high ISO setting.

The LUMIX 3D1 boasts extremely fast consecutive shots at 8 fps (without auto focusing) and 4 fps (with auto focusing) in full resolution.  Utilizing quad-CPUs the Venus Engine processes large amounts of 1920x1080i Full-HD data at high speeds in either AVCHD or MP4 formats.  Although using two sets of lens units and sensors, energy consumption of Venus Engine stays minimized to maintain the camera’s battery life for as long as that of a single lens compact digital camera.

The Panasonic LUMIX DMC-3D1 will be available in December 2011 for a suggested retail price of $499.99. For more information, please visit www.panasonic.com/lumix.