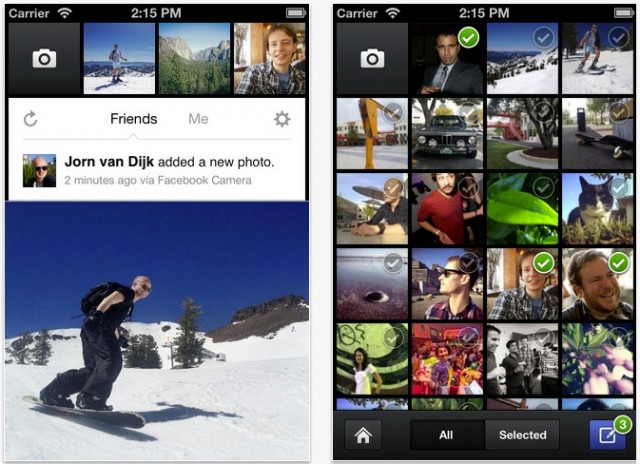 A wee bit over a month since Facebook announced its plans to acquire Instagram for a cool billion, Facebook has launched its own camera app for the iPhone.  The new camera is aptly called Facebook Camera.

On the plus side, it seems rather quick and offers access to Facebook photo feeds if you are interested in only checking out the latest images from your friends.  It also includes a set of filters that will remind you of Instagram filter effects.

Sharing images, however, is limited exclusively to Facebook, which is the real kicker for me.  While Facebook certainly has an interested in keeping there product locked down, it seems rather silly to me to ignore the way people use their mobile devices.

Sometimes, we want to take a photo and share it via text to a single person, or any other number of ways we share photos from our phones.  This is an instant handicap with Facebook Camera.  As a result, something like Camera+, Camera Awesome or Instagram will continue to be the camera of choice for many mobile users.

Additionally, the current version of Facebook Camera won’t let you access your iPhone’s Camera Roll unless location services are turned on for the app, which would tag photos with your GPS coordinates. Not cool.

No word on an Android version yet.  Not that it surprises me though…

Facebook Camera is available for free in the iTunes App Store.