Pentax is heavily teasing a full frame DSLR and leaks/rumors are continuing trickle out as Pentax still tries to plug the holes before the camera is finally announced. 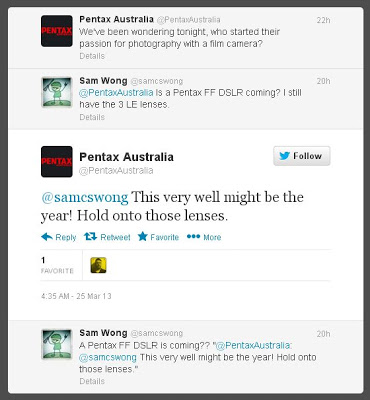 In the latest tease, Pentax Australia responded to a customer on Twitter who inquired about using his old Pentax lenses with a full frame DSLR. Pentax Australia suggested that he “Hold onto those lenses” and that “This might very well be the year!”

At the same time, Pentax enthusiast Rice High received a tip that Pentax is prepping for the release of this full frame DSLR possibly next month. He’s even put together a handy counter that is counting down to the rumored April 17 release date.

In the past, Pentax has poured on some teasing leading up to announcements of new DSLRs (e.g., prior to the K-7 unveiling in 2009), so we could see some more official teases very soon if the camera will, in fact, be announced in April.