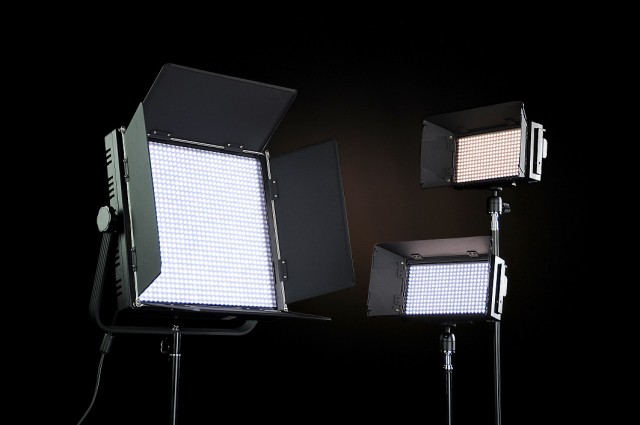 The LEDs are upgrades to its past best sellers, and come complete with all-metal barn doors that lock on and stay in place no matter how it’s mounted, to shape and control lighting.

The LED-312D is a daylight balanced light  at 5600K with a CRI of 92 with variable intensity, while the LED-312DS is a variable temperature light.

Check out the overview video for the LED-312D and 312DS lights below.

Next Generation Upgrades to Best-Selling LED Lighting Panels Offer More Portability, Control, and Ease of Use for Amateur and Professional Photographers

Fotodiox, the leading manufacturer and distributor of high-quality photography and videography accessories, has announced the availability of its next generation LED light panels; the Fotodiox LED-312D, LED-312DS, and LED-1024AL. The new LED lights are compact and powerful, while remaining lightweight – perfect for both studio and location shooting. Fotodiox’s LED panels generate little heat, use little power, and now the reduced bulk of these newest lights maximize portability and mounting possibilities to capture the perfect shot.

The three new LED panels feature all-metal barn doors to shape and control the light, while a locking system keeps the barn doors in place, no matter how the light is mounted. The lights feature a backlit LCD panel that displays the percentage of light intensity and remaining battery life, to avoid shutdown during the most important photo shoots.

“The new added features, especially the barn doors, make the new equipment ideal for photographers and videographers who want more control, while remaining compact and lightweight to carry on location,” said Kelvin Luo, CEO of Fotodiox. “Our original LED lights were a big hit with both amateur and professional photographers and videographers, and we’re proud to be releasing the next generation of these high-intensity lighting solutions.”

The Fotodiox LED-312D is a versatile professional grade LED light that comes equipped with 312 ultra-bright 5600k LEDs. The powerful daylight balanced LEDs offer a full spectrum of soft light, with full control over the light level from 10-100%. The light is equipped for fully cordless operation with the included lithium-ion battery packs and charger. A rear-mounted backlit LED status display shows both the remaining battery level and the light’s brightness level.
Control and shape the light with the new, all-metal barn doors. Two included diffusion panels securely lock into place – one panel softens the light even more, and the second panel is for matching the 312-D’s light’s color temperature to match tungsten light sources.

The Fotodiox LED-312DS is an equally powerful and professional LED light panel that shares the form factor of the 312D. Additionally, the 312-DS features a dedicated control to change the light’s color temperature from 5600K daylight to 3200K tungsten color temperature, or any level in between.

The light level is fully dimmable from 10-100%, as indicated by the rear-mounted backlit LCD status display. In addition to the real-time battery level monitor, you can also see the current color temperature output for maximum control of lighting settings.

The Fotodiox Pro LED-1024AL comes with over 1,000 powerful LEDs in a compact (12” x 12”) form. The 5600K daylight LED panel is lightweight, making it the ideal versatile and powerful lighting solution whether in the studio or on location. The complete kit includes the 1024AL light, all-metal mounting yoke, locking diffusion panel, AC adapter, and a custom-fitted soft shell case with handle.

All three of the new Fotodiox LED upgrades are available for immediate sale, and each light kit comes with a 24 month manufacturer warranty.