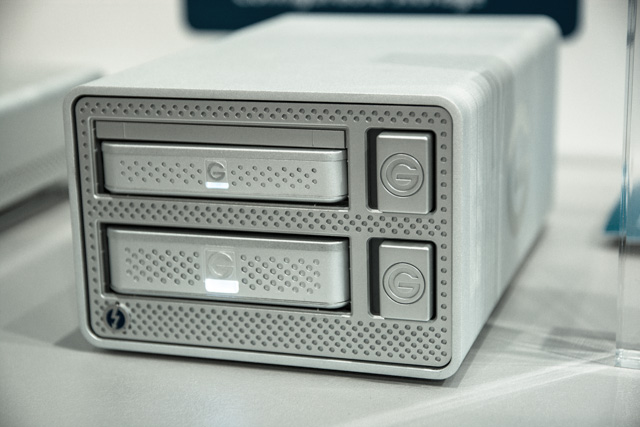 The G-Technology G-Dock ev is a new hard drive dock that is something we could really only dream about (if that) before the arrival of Thunderbolt. The G-Dock features two drive bays that accepts G-Technology G-Drive ev and G-Drive ev PLUS that, once inserted, mount on your system over the G-Dock’s Thunderbolt connection.

The novel feature of the G-Dock is that the G-Drives can be ejected and taken with you for use on the go via a USB 3.0 connection on the “portable” G-Drive ev units. However, the G-Drives connect into the dock via a SATA connection instead of the USB 3.0 used for when the drive is portable. A very slick set-up indeed.

The G-Dock standard configuration ships with the G-Dock drive bay and two G-Drive ev hard drives. These drives offer a 136MB/s data rate, which is in the range of what I saw in testing. G-Tech also offers a G-Drive ev PLUS drive that delivers 250MB/s data rate from a single drive. 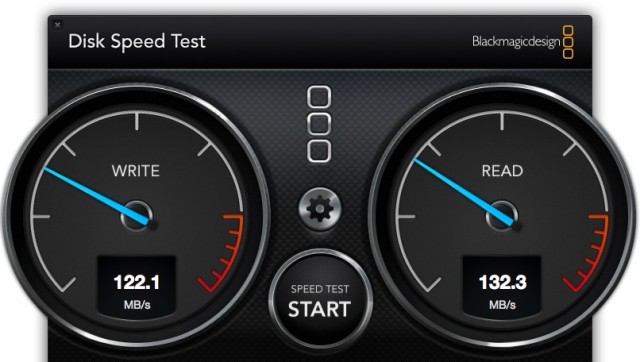 The G-Dock ships with drives configured as a JBOD (“just a bunch of disks”); however, they can be configured as RAID 0 or 1. Of course, if you RAID your drives, they will no longer be dual purpose drives that you can use standalone in the filed and will be tied to the RAID pair.

Out of the box, the drives are formatted as Mac OS X Extended (Journaled). The G-Dock is only compatible with Mac OS X 10.7+; however, the G-Drive ev units can be reformatted for use in Mac and PC as FAT32 or ExFAT.

G-Tech claims that the G-Drive ev drives deliver up to 250MB/s when paired as a RAID 0. I haven’t tested that configuration; however, I have seen others’ results that are in that ballpark, if not faster. And, it’s no surprise when you consider the fast data rates you get out of a single drive at 130+MB/s.

The peppy individual drives in JBOD configuration also carry over that speed when using them as standalone drives in the field connected via USB 3.0. They maintain that same 130+MB/s data transfer rates when plugged in directly to your USB 3.0 port. When it comes to connecting a single drive to a computer over USB 3.0 or Thunderbolt, you really aren’t going to notice a difference thanks to the faster data rates of both connections. 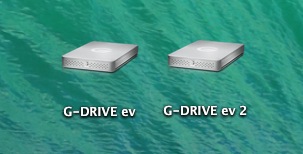 When inserted into the G-Dock, the individual drives show up on the desktop just as any other drive would. You can access them just the same as you would any external drive. Prior to physically ejecting the drives from the G-Dock (using the eject button on the G-Dock), you will first need to unmount them from your Mac. And, unmounting them from your computer works just the same as any other drive – with the exception that you now have the ability to unmount from G-Tech’s “Assistant” software if you installed it when you set up your drives. 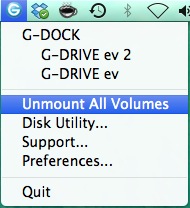 The G-Tech Assistant software shows up in your Mac menu bar as a little ‘G’ icon and provides info on mounted drives. Additionally, it will provide feedback on drive health and when drives can be physically ejected based on the color of LED lights on the front of the G-Dock. You can also unmount all drives (presumably even across multiple G-Dock units) with a single click from the menu bar.

The utility of the G-Dock can likely be seen more by the media professional who spends time away from their desk and/or needs multiple copies of media going to different places simultaneously. Thanks to Thunderbolt, you can daisy chain up to six of the G-Dock units for a total of 12 drives connected through one Thunderbolt port.

While RAID 0 is probably not the ideal use for most G-Dock users, the ability to have multiple pairs of RAID 0 drives on hand could be attractive instead of purchasing several standalone RAID 0 Thunderbolt drives. And, of course, you can still have other G-Drive ev units that are standalone in the JBOD configuration and available for field use.

G-Tech includes a Thunderbolt cable with the G-Dock, which is nice since early Thunderbolt drives didn’t include a cable and purchasing one from Apple would set you back $50. The standard configuration with two drives included retails for $749; however, B&H is offering a kit at the time of this review that includes a pair of extra G-Drive ev units (that’s 4 total drives in the kit) for the same price. Additional 1TB G-Drive ev units retail for $199; however, they can often be found for less. I haven’t found any of the G-Drive ev Plus units for sale yet, but is supposed to retail for $349.

You can read more about the G-Dock ev here on G-Tech’s website. If you have technical questions beyond what I’ve talked about here, I would recommend hitting up the user manual and/or the support page link on the G-Tech’s site.