Macs aren’t always the easiest to deal with for upgrading internal components. The new iMacs are locked down to only RAM upgrades and the Macbook Pro Retina models have zero internal upgradeable parts. So, when Apple announced its trashcan-looking Mac Pro, most of us figured that would be the end of upgrading components inside the Mac Pro as well. As it turns out, it’s not as bad as we feared.

While the graphics cards aren’t upgradeable, the RAM is easily replaceable by the user with PC3-14900 DDR3 ECC 1866MHz 240 Pin RAM sticks. These RAM kits are already starting to become available from the likes of OWC and Crucial at significant savings over Apple’s OEM prices. 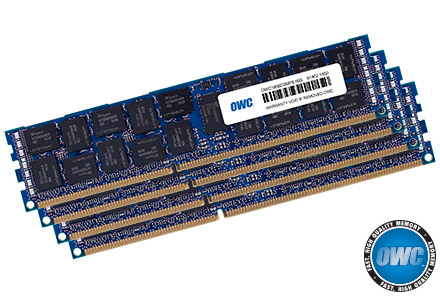 Bumping the Mac Pro’s RAM to 64GB direct from Apple adds $1200 to the purchase price. Buying 64GB of OWC or Crucial RAM mentioned above currently runs $850 and $738, respectively. You could then even sell your 16GB RAM that came with the Mac Pro to further recoup some of that cost.

Additionally, there are several CPU upgrades that are confirmed to work and offer some solid increases in performance. It’s still the early days of processor testing in the new Mac Pro, but expect real upgrade options to be available soon. 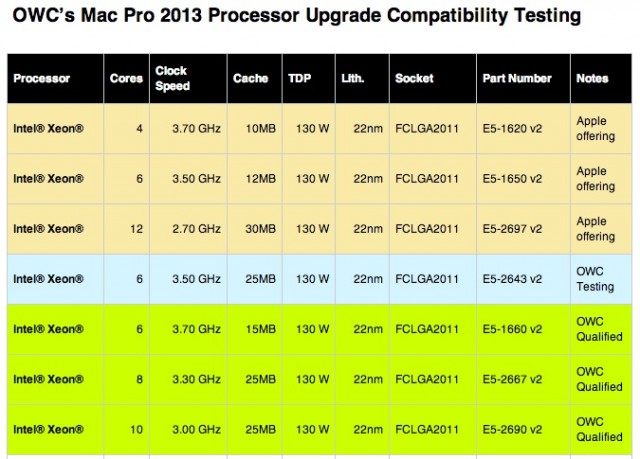 Of course, the ability to easily drop in a 3.5″ hard drive into one of the four bays found in the previous Mac Pro is long gone. Now, if you want to expand storage space, you’re left with USB 3.0 and Thunderbolt options, which, frankly, are pretty good options given the price drops we’ve seen over the past year. Even RAID 0 drives are getting cheaper to buy and are smoking fast thanks to both Thunderbolt and USB 3.0.