Coremelt TrackX is a plugin for Final Cut Pro X that allows you to track objects in your footage while inside FCP X using Mocha and without needing to take footage to an outside program like After Effects or Motion. The trackers are added to your footage and you can replace screens, add tracking text or blur logos and such directly from your FCP X project.

The workflow is rather straightforward. Although it is not an entry-level task, it is still fairly simple to follow the tutorials and start tracking with TrackX. My jaw dropped the first time I saw this working in my FCP X project. 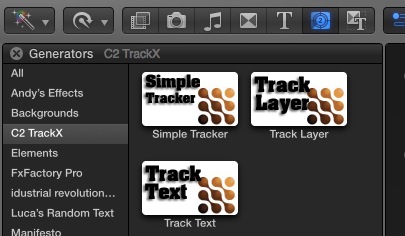 There are three tools to use for tracking in TrackX: Simple Tracker, Track Layer and Track Text. You will find all of them in the Generators tab after installing TrackX.

Check out the video below that shows you how to use the Simple Tracker in TrackX.

Now take a look at the following video to see how you can do screen replacements and signs with Track Layer.

And, finally, here are some more advanced techniques for dealing with manual keyframing when tracking goes bad because your tracking object is obstructed or it moves out of frame.

TrackX is pretty amazing for what it is. It can be a real time saver for simple tracks where you would normally have to bounce footage out to After Effects or Motion.

I encountered a couple of issues along the way, but nothing that didn’t have a work around. 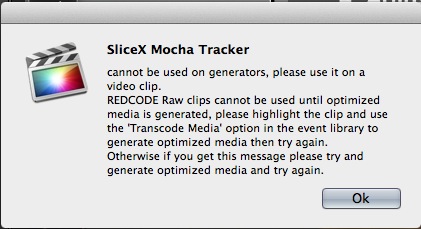 A problem that was undocumented when I first started testing TrackX arose when attempting to track with (at least some) AVCHD footage. When using AVCHD media, the error message reads:

SliceX Mocha Tracker cannot be used on generators, please use it on a video clip.

Taking a hint from the REDCODE Raw warning in the message, I optimized the clips I wanted to track and TrackX started working fine.

After I sent this issue to the techs at Coremelt, they noted the problem and released an update that more specifically addresses AVCHD clips. While you still can’t track using non-optimized AVCHD footage, the error messages are more clear now.

The issue relates to how TrackX analyzes footage. The mocha tracker in TrackX uses Apple’s Quicktime to read video files. And since Quicktime can’t read AVCHD .mts files, neither can TrackX. Accordingly, we have to optimize all AVCHD clips that we will be using for tracking.

A second issue I encountered was actually more of an issue with the way FCP X is built rather than Track X. You cannot use Track X on connected clips. It has to be a primary storyline clip. I think this is the case because the tracker generator has to be attached as a connected clip in order to track the footage beneath it.

The workaround is create a compound clip out of the connected clip and then build your tracking and animation inside the compound clip. Then you can come back to the main storyline to see the edited results. So, you’re basically treating the compound clip as a pre-comp.

This issue is just another knock against #$!&%@ connected clips in FCP X. It was a neat idea and can work in some edits; however, it goes against so many mainstays of NLE workflows that I want to scream sometimes. Again, that is most likely an FCP X thing, not a Coremelt thing. Still it’s a quirk that you need to be aware of. If Apple would just give us normal video tracks… ugh.

Again, you can see the advantages that TrackX brings to the table for quick screen replacements, blurs and text tracking. The ability to stay inside of FCP X is the big hit here. TrackX is only $99, so it’s hard to argue against the value that it delivers if you are doing much of these rather simple tracking and replacements. The downside is that it is only available for FCP X. If that’s your NLE, it’s really a no-brainer at that price though.

If you’re an FCP X user and you want to give it a try, Coremelt also offers a free 15 day trial. So, you don’t really have a reason to miss at least testing it out. More details here on Coremelt’s website.