Even though Apple only officially supports (and offers for sale) up to 64GB RAM in the new Mac Pro, it hasn’t stopped third parties from developing, testing and certifying new RAM kits up to 128GB for it.

Both OWC and Transcend have recently released new 128GB RAM kits for the new Mac Pro. The full amount of RAM is available for use by the machine and increases the overall performance with these 32GB RAM modules. However, OWC notes a caveat in the technological limits of the 32GB RAM modules as follows:

While current DRAM device technology limit 32GB modules to a 1066MHz memory clock in the Apple Mac Pro 2013, due to enhanced CAS Performance of OWC MaxRAM 32GB Modules, actual real-world performance is insignificant in low memory need scenarios while offering incredibly significant performance gains in all cases where application use benefits from greater than 64GB of total memory installed.

Upgrading to the full enchilada of 128GB RAM will set you back $2130 right now. The Transcend 128GB kits retail for $2480 at launch. Expect that price to go down in time though, which is common for virtually all RAM modules for Macs. 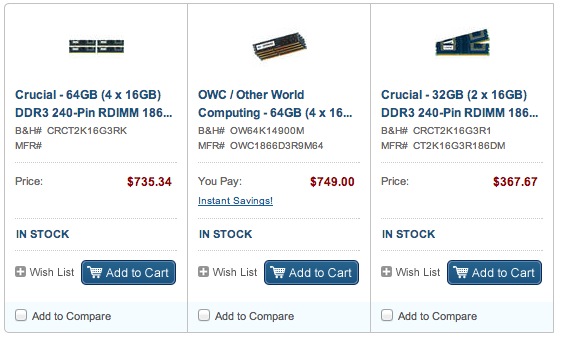 Of course, this practice isn’t new or even uncommon. Companies like OWC and Crucial have supported RAM capacities beyond Apple’s official specs of Macs for years. My 2011 MacBook Pro has been using 16GB of Crucial RAM since shortly after I purchased it – even though Apple only offers a max 8GB RAM for it. The boost in performance was noticeable from the moment I installed it.

Expect this trend to continue for as long as Apple delivers computers with user-replaceable OEM parts. Hopefully, that will last for a while longer on the desktop models in spite of recent MacBook designs.