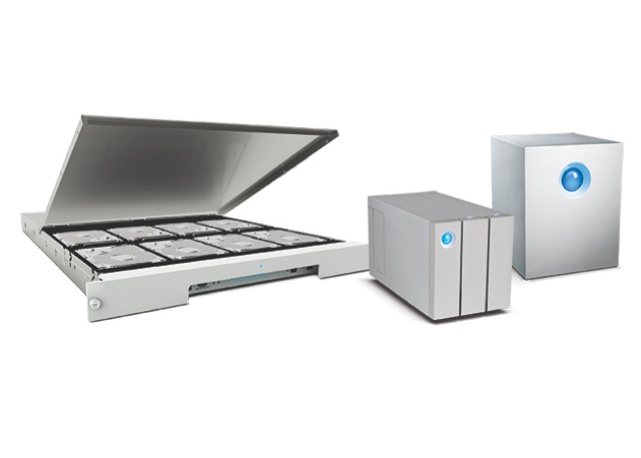 The LaCie 8big Rack Thunderbolt 2 is the company’s first Thunderbolt 2 rackmount storage solution. It features up to eight 6TB 7200RPM hard drives from Seagate, for an impressive 48TB in a rackmount unit. A single unit can deliver speeds of up to 1330MB/s, and go go even higher when multiple units are ran together in parallel.

The LaCie 5big now features Thunderbolt 2, hardware RAID 5 and higher capacity 6TB 7200RPM drives. It is capable of delivering speeds of up to 1050MB/s. The 5-bay drive delivers up to 30TB in total capacity thanks to the new 6TB drives.

LaCie 2big features Thunderbolt 2, hardware RAID and a new design. It provides speeds up to 420MB/s along with two 6TB 7200RPM hard drives from Seagate. The 2big also features USB 3.0 in addition to Thunderbolt 2 for more compatibility across devices.

Pricing has not yet been released; however, LaCie says that all of these new drives should be available this quarter. Keep an eye out for them here at B&H Photo.

For those unfamiliar, Thunderbolt 2 is aptly-named as the second generation of Thunderbolt. It comes standard in the new Mac Pro but is not widely available yet. The good news is that it is backward compatible with first-gen Thunderbolt devices.