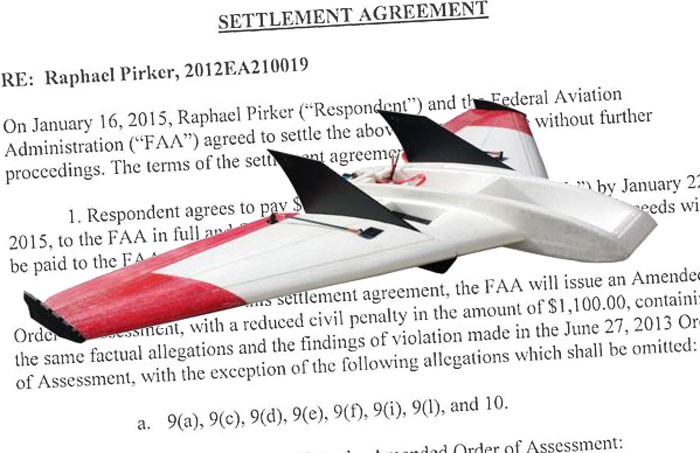 In October 2011, the FAA fined Raphael Pirker $10,000 for flying a radio controlled Ritewing Zephyr glider (pictured above) and shooting footage for commercial use at the University of Virginia. That case has finally settled.

Quick aside: The Zephyr he used at UVA is similar to what you see in this video:

Pirker won the first bout with the FAA when an administrative judge ruled the FAA did not have authority to fine him for flying a small, hobby-sized craft regardless of whether it was commercial or recreational use. The FAA appealed and won a narrow interpretation of one point of the legal issues at stake, which reinstated its authority to fine commercial drone pilots for violations of FAA rules and remanded the case for further hearings on the remaining issues in the case.

Rather than continue to fight the FAA on further appeal (he had appealed the prior order to the NTSB), Pirker settled the case by paying the FAA $1,100. According to the Settlement Agreement, Pirker “does not admit to any allegation of fact or law herein, and by not contesting [the fine] is resolving the matter solely to avoid the expense of litigation.”

Litigation expenses in an administrative legal battle can grow to astronomical amounts. I suspect that legal fees were well into the tens of thousands of dollars thus far and could easily be pushed into six figures if this battle were fought to the bitter end. Given the changing climate and lack of clear precedent concerning civilian drone use, getting out of this with an $1,100 settle and no admission of wrongdoing was a bargain.

In his press release announcing the settlement agreement, Pirker acknowledged the several amici curiae briefs that were filed in support of him on appeal. He further stated:

“The case stood for the proposition that before the government regulates (let alone bans) use of a new technology, it should first understand the actual risks and benefits of the technology and consult with the people and companies who will feel the impact of those regulations. The case inspired many people to express their thoughts about what regulations would be appropriate for the individuals and companies developing and using this great technology – not only for business purposes but also for humanitarian and environmental causes.”

He further noted several problems with the current legal reasoning of the FAA:

Although we support the safe operation of drones, we continue to disagree with the NTSB Board
decision because it leads to various problematic inconsistencies. The notion that airborne objects of any size and weight are already regulated just like passenger aircraft remains untenable, contradicted by common sense, the FAA’s own historical documents, and the text of the regulation which indicates, for example, that aircraft operational regulations apply to “each person on board an aircraft.” The logic of the decision would turn every backyard from which a person flies a model airplane into a regulated “airport” (defined as “an area of land or water that is used or intended to be used for the landing and takeoff of aircraft”). There also appears to be no explanation for why the NTSB has never investigated any of the (thankfully rare) serious model aircraft accidents as would be required by statute (49 U.S.C. § 1132).

While Pirker could have potentially fought the battle all the way to the US Supreme Court, the outcome (even if favorable to Pirker) would have little to no impact on the rest of the drone industry. The FAA is currently developing a new set of rules that should be put in force at some point in 2015. And since Pirker’s actions would not be governed by those new rules, there is little reason to fight the case on principal alone.