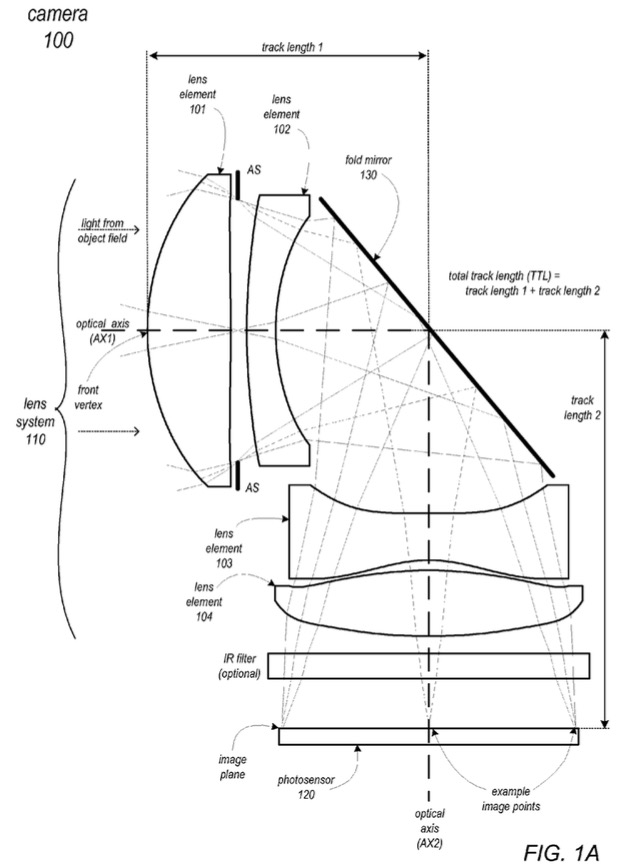 Like the folded optics used the make the newly-announced and amazing Light L16 camera, the folded optics suggest that Apple will continue to fight toward photographic supremacy in the mobile space. Folded optics effectively allow manufacturers to make more complex lenses without necessarily increasing the thickness of a device.

Hey, you gotta do something else to build a better lens when your phone is only 7mm thick…

Lens makers do this by inserting a fold mirror behind the exterior lens elements and directing the optical axis 90 degrees from the “front” of the camera. The effect is similar to how a reflex mirror is a DSLR directs light to the optical viewfinder but, in this case, we’re talking about a mirror used to direct light that’s actually captured by the sensor.

The various embodiments in the patent reference both 10mm f/2.8 and 14mm f/2.8 lenses; however, taking the referenced field of view into account, these are telephoto lenses with roughly a 150mm to 200mm effective focal lengths. However, the patent leaves room for zoom lens configurations as well as multiple camera/lens configurations. Additionally, it references the possibility of an adjustable aperture.

Check out the patents in full below.