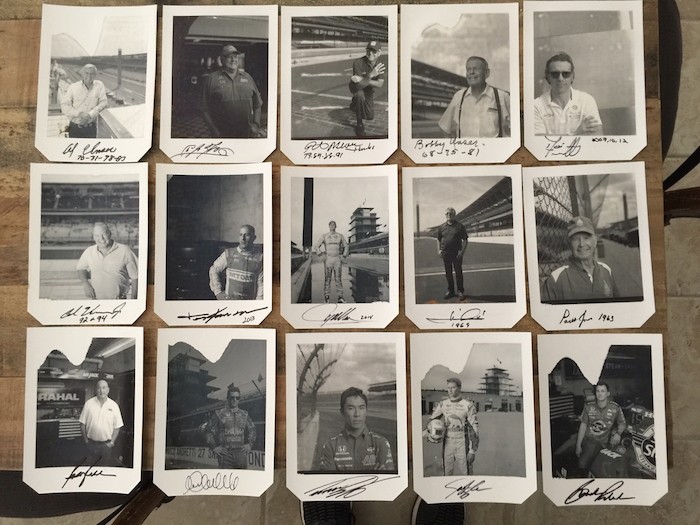 I make my living photographing things and people that move. I do that  with a Nikon camera in my hands. Currently my D810 and D5 bodies take 95% of those frames. I am very OCD when it comes to details of the scene, the lighting and how my subject fits within that rectangle.

However, for the past eight years, sitting quietly in the bottom drawer of the refrigerator tucked away in a thick plastic bag has resided 45 exposures of old (and expired), Polaroid Type55 PN black and white 4X5 film. A tool that is anything but perfect. Using such a tool takes a substantial element of control out of my hands which in turn takes me far out of my comfort zone. 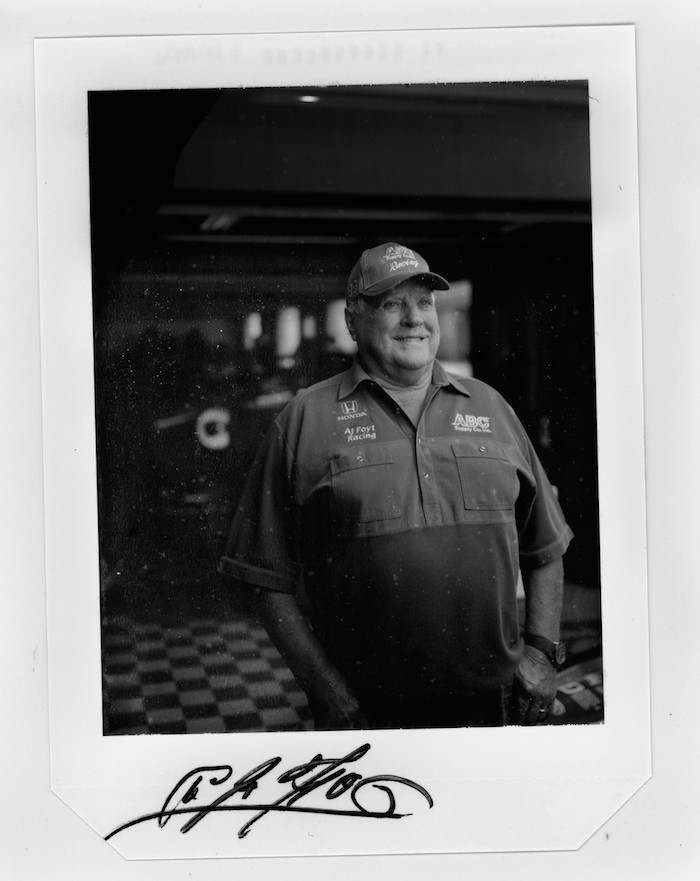 When I shoot with my DSLR, I know exactly what I am going to get when I push the shutter. However, in using a film like Type55 (especially when it is expired), I know that the film is going to do its own thing and that the end result will indeed be imperfect…and that is the beauty of the result is produces. You still have to have the vision and the eye for composition, but how the image develops across that frame is unknown until the moment it happens. 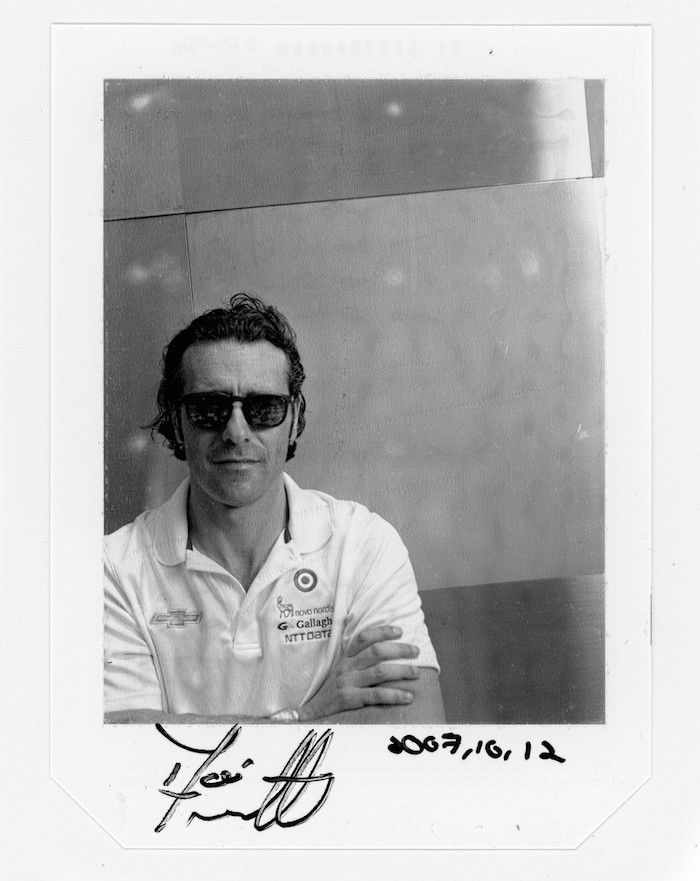 When Polaroid ceased production of this (and all their instant film) back in 2008, I had never made a single frame with the analog relic. However, I was well familiar with what it was and the results it was capable of producing. I was still very much learning and figuring out who I was as a photographer at the point. My storytelling abilities were still very raw. Yet, one day I wanted to have this tool in my box to explore a new medium in telling a story. I experimented with some frames (I originally had 60 total exposures) on portrait shoots on three occasions, yet I kept the bulk of the film tucked away for one single project. Over the years, I made the occasional pitch for an idea to an editor, yet it never got traction. I was not in a rush so I remained patient to make a serious push for an idea I knew was the right fit. 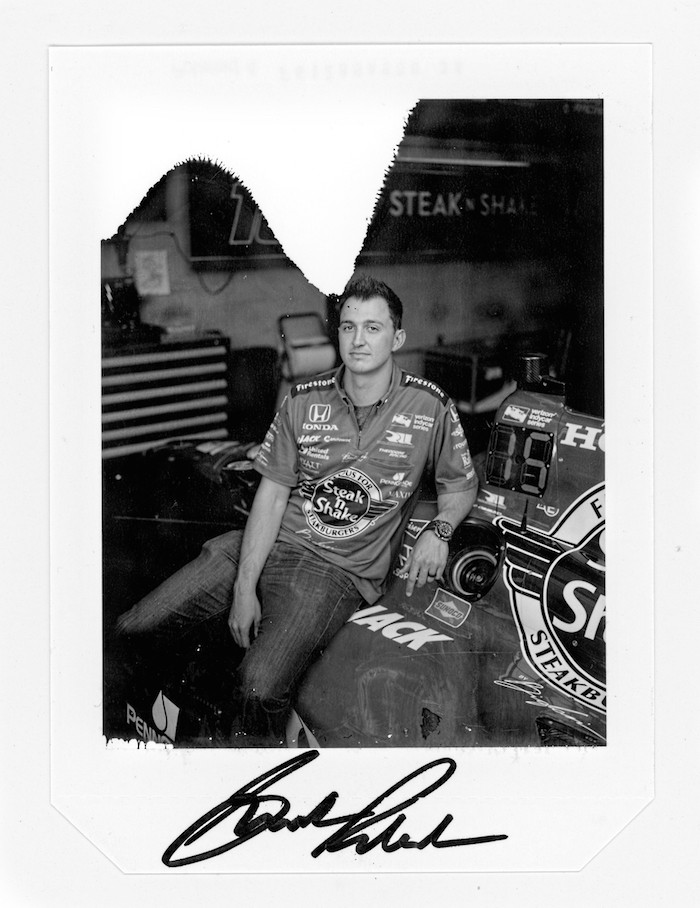 Rewind a year and I was at the Indianapolis Motor Speedway working an all access video piece with IndyCar rookie driver Gabby Chaves. The more I was around the speedway, the more I fell in love with the history, tradition and the innovation that has taken place on this storied track and the people who were involved. Much has happened here on and off the track that has had a major impact in the automotive industry and beyond. It is a proving ground both for technological advancements and for the courage of the individuals that battle and push the limits of self and machine. 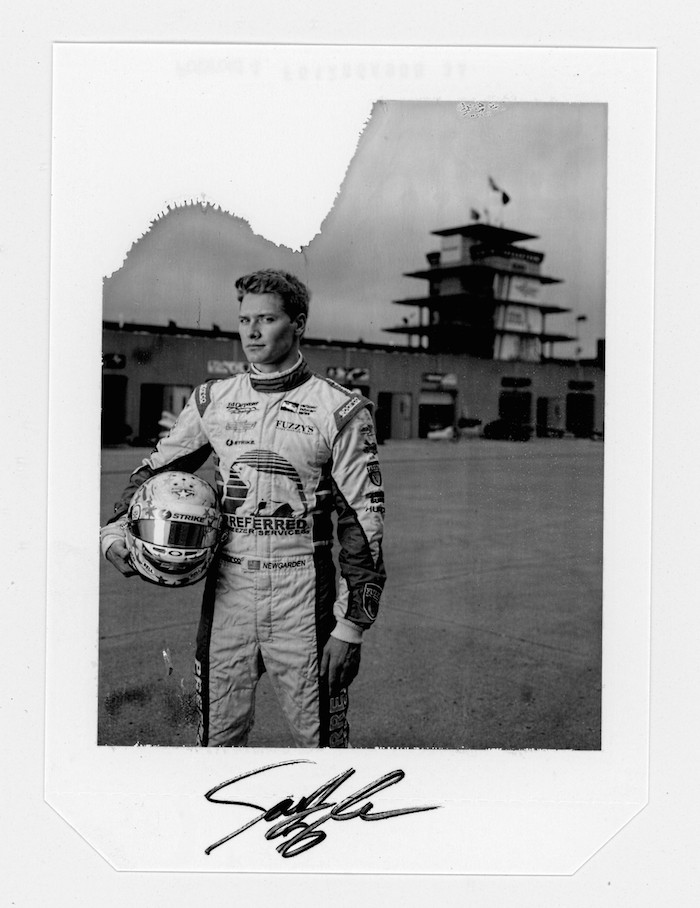 In that same sense of pushing the boundaries, I work with my own equipment. I am drawn to people and things which convey strength, power and speed. I live for the challenge of capturing those moments which move the fastest and are the hardest to capture. Sometimes that is a sporting event, sometimes it is just a person standing in front of the camera. I use the latest and most advanced Nikon and Profoto equipment to help me push my creativity to the absolute limit in my photographic pursuits. 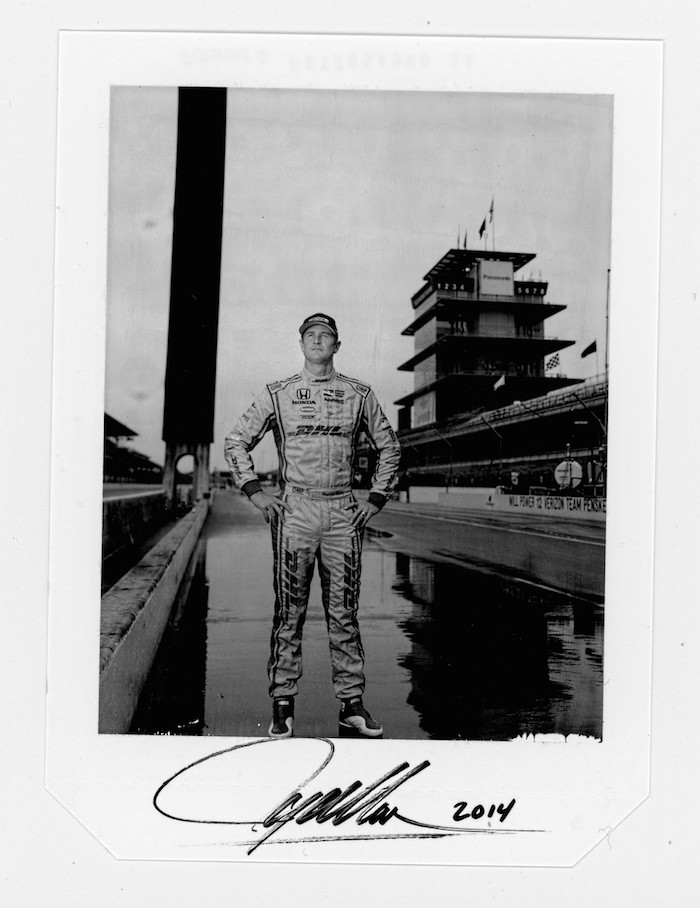 However, still quietly resting in my refrigerator was something completely opposite to how I currently work. Aware that this year was the 100th running of the Indianapolis 500, I began to formulate ideas in detail on how I would use the film on a project to honor the people who have pushed the limits on this track and made history. In January I began to visit with a handful of editors to find the right fit for this project. Immediately, ESPN surfaced as the ideal home for the project. Initial discussions took place while in Arizona for the College Football Playoff National Championship game and continued through the spring. In April, the details began to take shape and by early May, I was able to borrow a 4X5 camera and began to familiarize myself with this old visual tool. 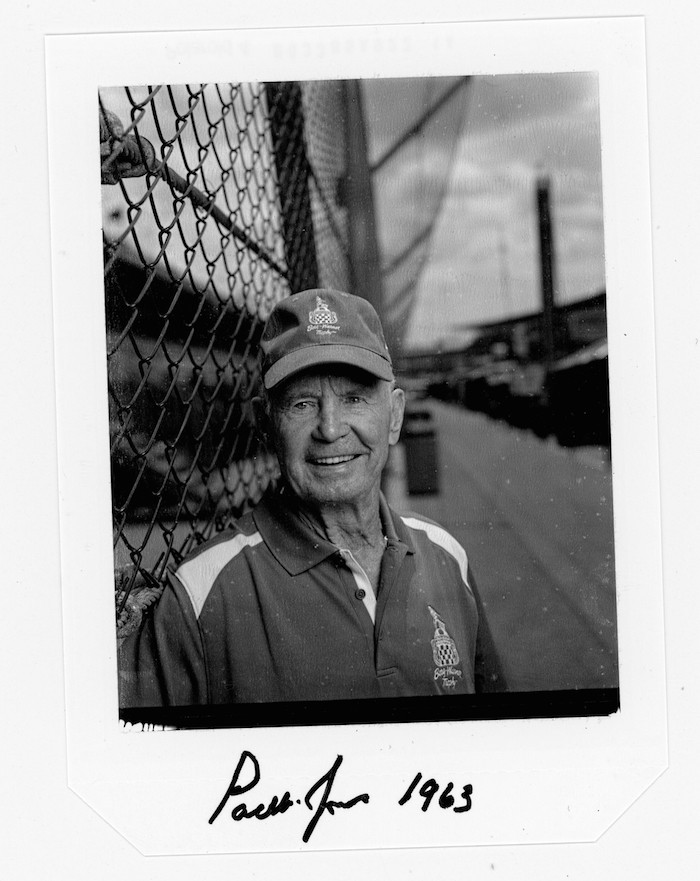 Over the next week, contact was made with a host of race teams to see who we might be able to get to participate. We cast a wide net and while we did not get everyone we had hoped for (i.e. Helio Castroneves and Juan Pablo Montoya), we ended up with 15 drivers willing to sit for us comprising current and former drivers. Of the 15, only 4 have yet to win the 500. Of the 11 that had won, we ended up getting 25 years worth of champions, including all three of the 4-time winners. 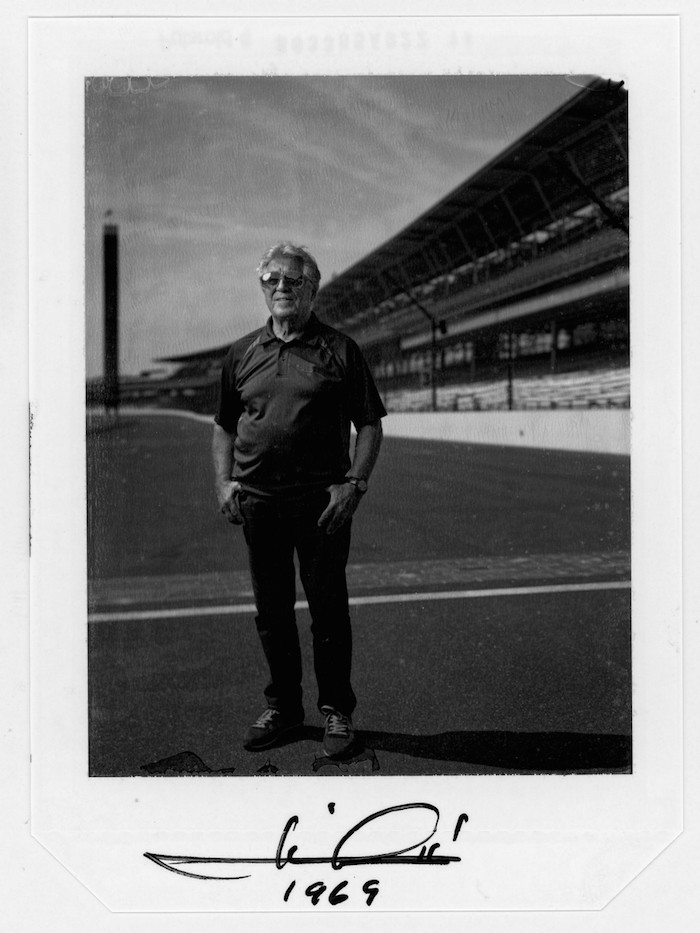 We started off the project on Tuesday of last week and began with one of the most recognizable names in racing, Mario Andretti. I took one test frame of my friend who was helping me out and then spent two frames on Mario and we were done. After we pulled apart the film to check the frame, the negative immediately went into the chemicals and water and the best positive print was then signed by the driver and if a champion, he would write the year(s) he won. The only two who did not write their years were four-time winner AJ Foyt and Bobby Rahal. After everyone signed the print, I then recorded audio to complete the multimedia aspect of the assignment and help the prints come alive with voice and first person perspective. 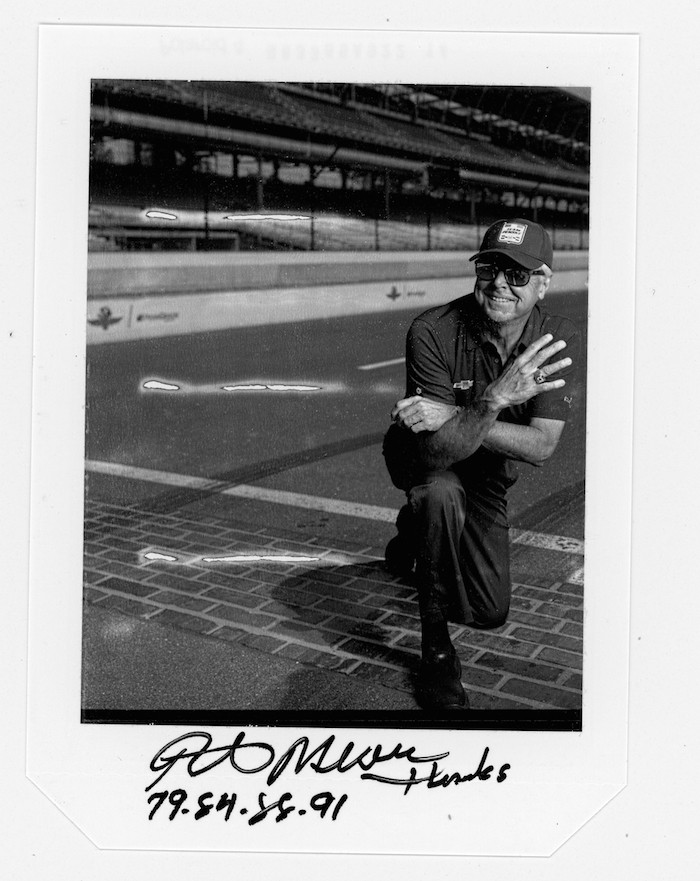 The next two days, we had six portraits lined up each day and we were in the gauntlet of the shoot which had quickly become the most nerve wrecking project I had undertaken in a year by far. Perhaps part of that was because what I had on hand to tell the story was VERY finite. I began with only 45 exposures. Over the course of the project, I used two exposures on test frames. 14 frames ended up being dead frames where the film either didn’t expose, the clip got bent in the holder or the chemicals did not properly smear across the frame and the subject was not developed. That left us with 29 properly exposed frames for 15 drivers. No single driver got more than 4 exposures and some only received one exposure. Once we knew we had a usable shot, I committed to that frame and got ready to move for the next shoot because I didn’t want to run out before I reached the end. 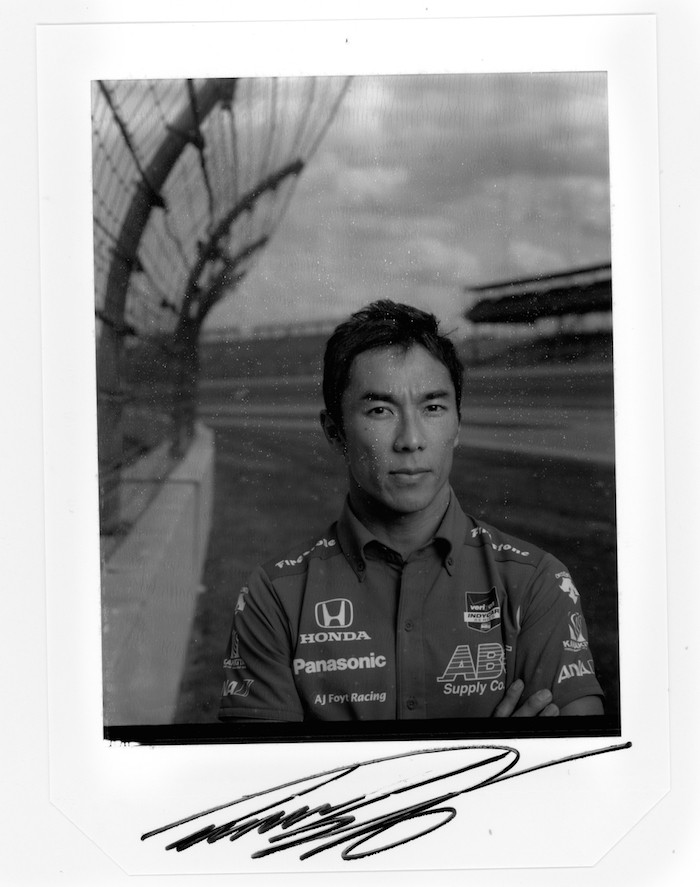 I had to work digital quick with an analog process that is anything but fast…even if it is instant film. We had no more than 15 minutes with any driver. For some, we only had 5 minutes. I kept the lighting kit simple with a Profoto ProB4 air pack and ProB Plus head and the 3ft RFi octa. I also had two Acute B2 packs and heads for secondary lights and brought along two Profoto RFi 1X3 strips and two zoom reflectors for use as needed. 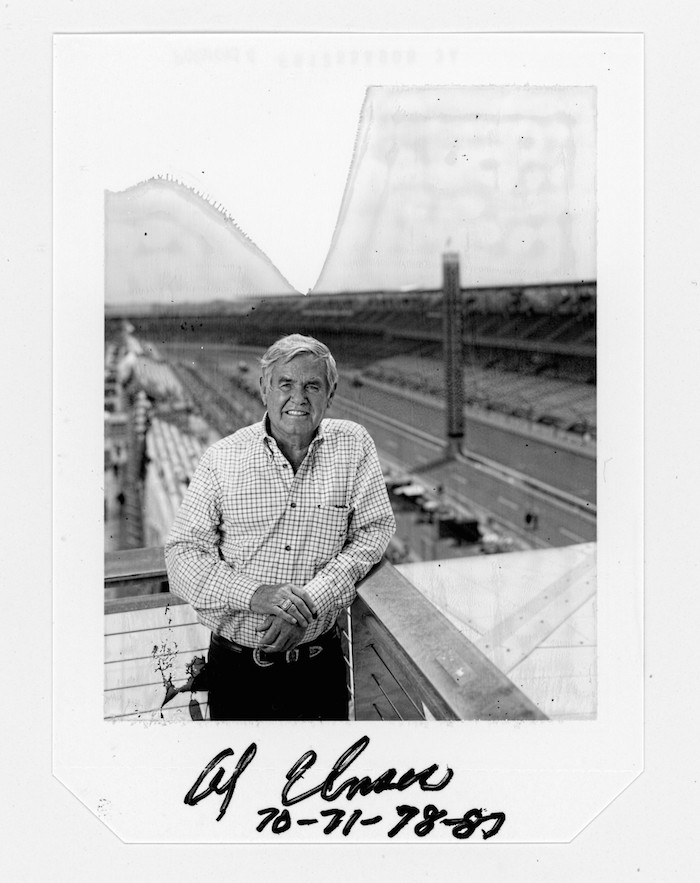 The last two drivers I photographed was Al Unser (a four time winner) and his son, Al Unser Jr (a two time winner). Junior would go last and>when I was done with him, I had only two exposures remaining in the box and I used those two exposures on a father/son shot. After frustrations over the past day with funky exposures due to chemicals having lost viscosity, both of the last two frames pulled and developed perfectly. 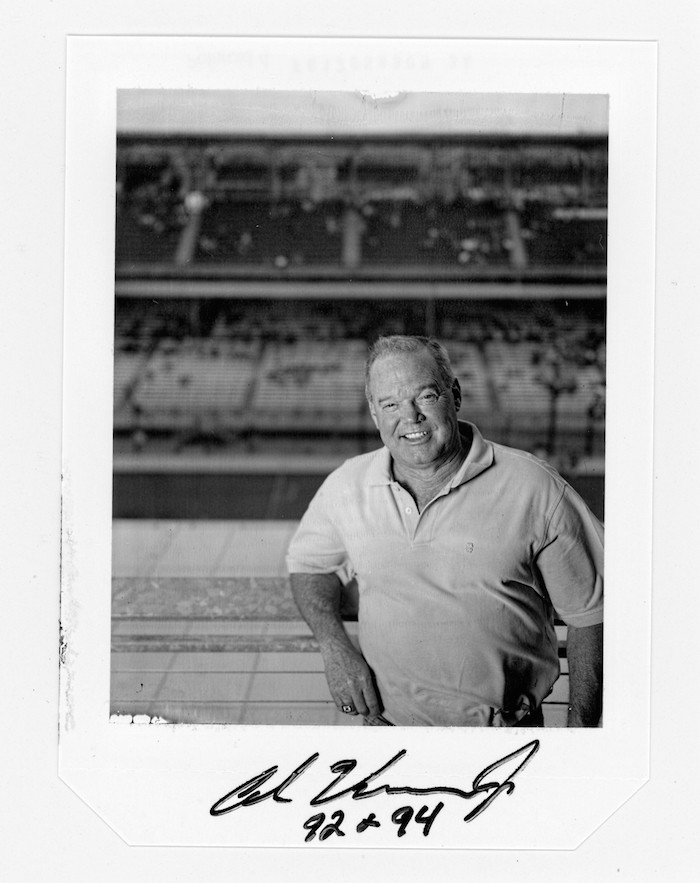 On Friday afternoon, the portraits were complete and the final two exposures were scanned and sent to Bristol. By the time the project went live on ESPN.com on Sunday morning, I was already logging the miles as I criss crossed the speedway armed with two D5 bodies, a D4s,D750 and D810 and I felt at home. I pressed the shutter on the 4X5 a total of 45 times during the week. Although I do admit that early on in the project, I also was making a portrait or two with the D5 until I knew everything was coming together on film. I made 258 frames on the D5 and that includes scout frames, test frames and portraits. On Sunday, I let ‘er rip and that is way too easy to do on the Nikon D5. For the day, I made6,831 frames. The first one was taken at 6:04 a.m. despite arriving at 4 a.m. The final frame was made at 5:46 p.m. 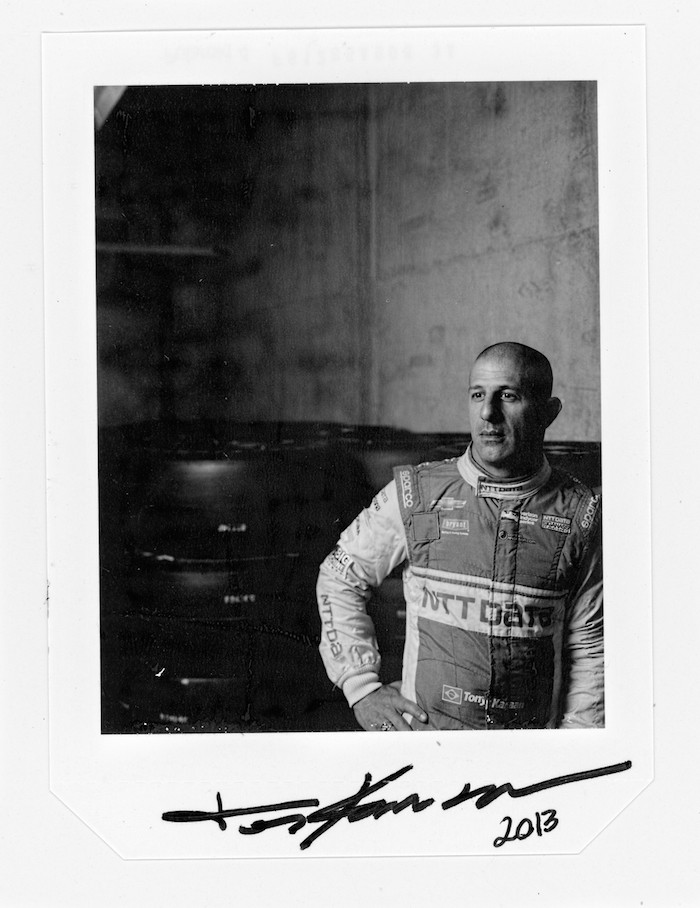 While I am most known for my portrait and sports imagery, I keep rooted in a variety of photographic genres. I feel that this diversity in subject matter helps me continue to evolve and elevate my vision and execution across all other disciplines. Looking back on the experiences over the past week in working composing frames on a frosted piece of glass and recognizing composition while looking upside down and backwards under a black cloth has been a refreshing and invigorating experience for me which will certainly allow me to take yet another step in my ever evolving vision and style. 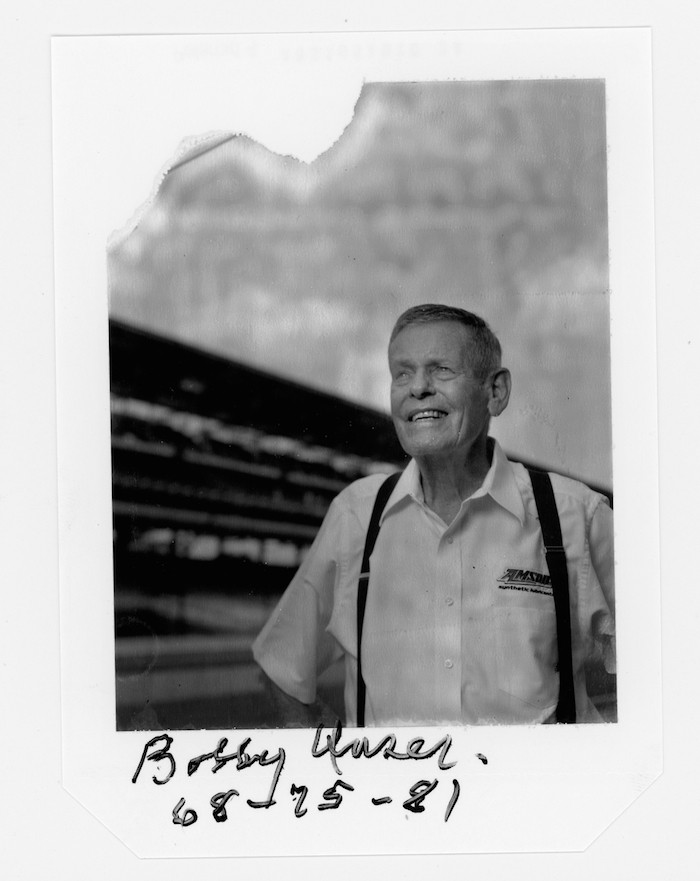 Each positive scan (done on an Epson flatbed scanner) was a 600MB file and each negative when later scanned on an Epson negative scanner will yield scans over 1GB per negative. For the race, I created 318.41GB worth of data that was backed up on a G-Technology G-DRIVE ev RaW SSD 1TB and then transferred to the main hub of my archive, the G-SPEED Studio XL.

The results of the work can be viewed here: