Canon has obviously been working on a new TTL flash system that works with radio sync triggering for quite a while now.  We saw a patent application for a Canon radio-triggered flash and camera system in August 2010 and now, almost a year later, another Canon patent application that advances this tech has been revealed by the USPTO.

And maybe (hopefully) this is a sign that it’s getting closer to market.

This patent application was filed in January 2011, while the one we covered last year was filed in February 2010.

When we saw the first patent application last year, we learned that Canon’s proposed wireless flash system is based off of the IEEE 802.15.4 standard.  This wireless standard is the basis for the likes of the ZigBee specification, which has been proven to garner a reliable range of 300 feet using the 2.4GHz band.

The nuts and bolts of this new patent application are all about making the “sync” work and addressing the problem of a delay between the radio transmission (from the camera) and reception (at the receiver).  It breaks down things like the pre-flash (for TTL exposure evaluation), as well as front and rear curtain sync. 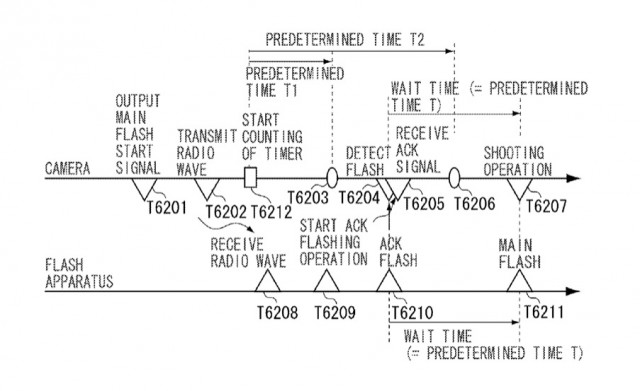 The application breaks down the process and goes to great pains to describe how it deals with errors, continuous shooting modes and so on.  The basic operation from the application is represented in the below quote from paragraph 125 of the application.

[A]fter transmitting the flash start signal via the radio communication unit and the wireless communication antenna, the camera microcomputer determines whether a flash detection signal from the light metering unit has been detected.

If it is determined that a flash detection signal from the light metering unit has been detected (Yes in step S4005), then the processing advances to step S4006.

A timing T4203 illustrated in FIG. 17 corresponds to the timing of detection of the flash detection signal from the light metering unit.

If a variation of luminance equal to or greater than a predetermined value is detected within a predetermined time period, the light metering unit outputs a flash detection signal to the camera microcomputer. –USPTO App. No. 13/012,271

There isn’t much in terms of sexy details about the flash system revealed in this application. However, we do get another small glimpse of this tech as it moves forward in the Canon system.  Hopefully, we don’t have to wait much longer to see it in a real physical product.

The market is very ripe for a feature like this to find its way into a camera body and flash system.  I, for one, hope that Canon is ready to drop this tech into its new 1D/1Ds camera.  Based on the two applications mentioned above, I expect to see some very slick features in the system that we haven’t seen before in third-party iterations of wireless TTL radio triggers from the likes of PocketWizard and Radio Popper.

Likewise, I’m looking forward to seeing how these same third parties adapt and enhance their product lines to remain relevant as this technology trickles down through the lower end of camera and flash product lines.

Stay tuned for the latest by subscribing to Photography Bay’s RSS feed.